New massacre by the Syrian regime 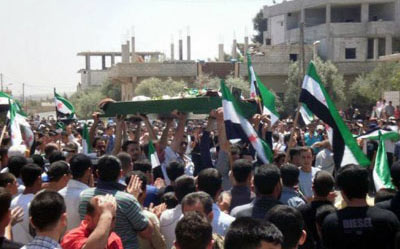 The massacre of approximately 116 civilians in Houla, near the opposition-held city of Homs, is one of the bloodiest acts since the uprising against Assad’s regime began, 14 months ago. As on other occasions, the government admits the slaughter, but it is trying to hold “Al Qaeda terrorists” responsible for what happened. However, the regime has not offered any serious evidence that would support its version or refute the accounts of the massacre by survivors.

According to several press reports, last Friday, regular forces from the Syrian Army opened fire on an anti-government demonstration and then gave way to the action of the feared “shabiha,” the irregular pro-Assad bands, that, in a matter of hours, executed more than a hundred people, the great majority of whom were women and children. This slaughter would have been the response to the assassination of a government informer, that occurred some weeks ago.

A few days later, on May 30, another 13 bodies of men executed with their hands tied behind their backs were discovered, that, as activists are charging, are electrical workers, who had refused to end a strike. The Houla massacre, under the noses of 300 United Nations monitors, exposed the crisis of Kofi Annan’s plan, supposedly in force since April 12, to achieve a ceasefire and initiate a dialogue between Assad and the opposition. This six-point plan objectively strengthened the Assad regime, that was not only legitimized as an interlocutor of a possible negotiated solution, but which used the “ceasefire” to re-establish its authority in the rebellious regions of the country, where popular discontent combines with the activity of different armed factions that are getting support from Saudi Arabia, Qatar and Turkey.

The imperialist powers that had adhered to Annan’s plan are cynically using the horror of the slaughter at Houla to intensify pressure on the Assad regime. As a symbolic measure, the United States, Great Britain, Germany, France, followed by other EU countries, as well as Australia, Canada, Japan, and Turkey, expelled the Syrian ambassadors, seeking to increase the regime’s isolation. Even Hollande, the brand-new French “socialist” President, imitating the attitude of his predecessor, the right-winger Sarkozy in Libya, was the first to raise the possibility of military intervention. However, despite Hollande’s seeking great-power stripes for France, the reality is that neither the United States nor the main NATO powers favor repeating the Libyan experience in Syria. And the divisions among the countries with veto power on the UN Security Council, have not been overcome, so as to give “humanitarian” cover to a possible military intervention. Russia continues to be one of the main international supports of the Assad regime, with which it maintains big deals connected with arms sales, and which is also the final bastion of definite Russian influence in the Arab world. Together with China, it has been blocking any UN resolution that would authorize a more offensive policy of “regime change” or validate foreign interference in the internal affairs of another state, that could be used against them at any moment.

Only months before the presidential elections, Obama is not willing to embark on another military operation that, according to Pentagon analyses, would not be at zero cost like the intervention in Libya, among other things, because the Syrian regime is in better condition and has better weaponry than that of Qaddafi. Although Republican candidate Mitt Romney went out to attack Obama for “lack of [US] leadership” in view of the Syrian crisis, after the wars in Iraq and Afghanistan and in the context of a difficult economic situation, military interventions do not enjoy popularity in the US. For this reason, the US government chose to avoid direct exposure and to act through its allies, Qatar, Saudi Arabia, and Turkey, that are providing weapons and military assistance to the Free Syrian Army and other factions that are fighting Assad’s regime. According to the most recent statements of officials of the Democratic administration, what could make these plans change is the spread of the conflict to neighboring countries, like Lebanon, Turkey or Jordan.

Up to now, the Obama administration’s plan has appeared to continue to be limited to increasing diplomatic and economic pressure by way of sanctions that are especially affecting the oil industry and the banks, while it makes progress in some solution negotiated with Russia and China, on the model of the “transition” in Yemen, that made possible negotiating President Saleh’s departure from power, leaving the pillars of his regime intact. However, this solution, that in the case of Yemen was not sufficient to end the harsh confrontations between factions of the army and the regime, has an additional obstacle in the case of Syria. The pro-imperialist opposition, united in the Syrian National Council (SNC), is going through a profound crisis. In the middle of May, its Chairman, Burhan Ghalioun, an exile with very good relations with the imperialist powers, but who received the support of the Muslim Brotherhood, presented his resignation to the organization, owing to irreconcilable divisions between the liberal and Islamist groups of the opposition. His resignation was preceded by the threat from the Local Coordination Committees of withdrawing from the SNC because they felt excluded from decision making, in the hands of the main pro-Western prominent figures, and of the Islamist organizations, especially the Muslim Brotherhood. This crisis of the opposition and the lack of clarity over which forces are hegemonic, especially the weight of the Islamist factions, potentially hostile to US or Israeli interests, makes the SNC an unreliable ally for the United States and the imperialist powers and opens up the game to other regional influences, like Qatar and Saudi Arabia, that are seeking to make a base among the Sunni groups of the population. The complexity of the situation means that among the possible scenarios, that of a prolonged civil war that brings the different communities, Alawites, Sunnis, and other minorities, sponsored by different regional powers, into conflict, cannot be ruled out.

Between repression by the regime and the threat from imperialism

The workers, the young people, and the impoverished and oppressed groups of the Syrian population, that have revolted against Assad’s autocratic regime, face a double danger: on the one hand, the brutal repressive policy of the regime, that, relying on false “anti-imperialist” credentials, supported by important figures like Chávez and groups of the populist left, is seeking to crush militarily those who dispute its control. On the other hand, the interference of the imperialist powers, that seek to manipulate the struggle against the Assad regime, in favor of their own interests, for which they have the complicity of the pro-imperialist leadership of the Syrian National Council, that is loudly asking for intervention, imitating the Libyan Transition Council. Unlike one section of the left that calls itself Trotskyist, like the LIT and the UIT (the organization that Izquierda Socialista belongs to), that shamefully mistook the NATO intervention in Libya for a “revolutionary victory,” from the PTS and the FT, we clearly condemn the counter-revolutionary character of every imperialist intervention or interference, and we reiterate our position that the only progressive solution for the working-class and poor Syrian masses, and, more generally, for the “Arab Spring,” is struggle and independent organization, against imperialism and its allies, with the perspective of establishing a new workers’ and popular power.