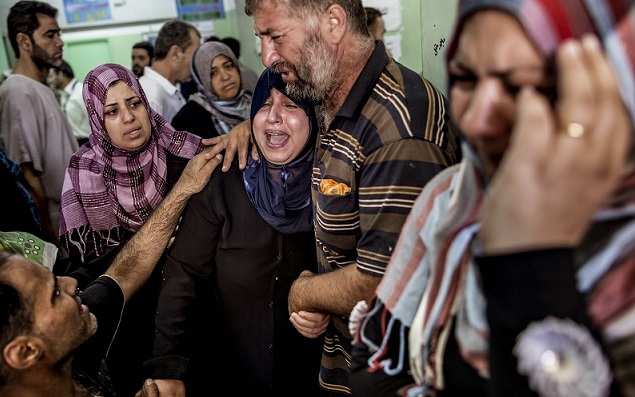 The new bombardment of a center of the United Nations in Gaza, that ended the lives of 20 Palestinians (6 of them children) on Tuesday night, took the number of dead in the Gaza Strip above 1,300. This is the sixth attack perpetrated by the Israeli army on a building under the administration of the UN (UNRWA).

Despite the fact that the UN condemned the bombing in a public statement, and that the Commissioner-General of the UNRWA in Jerusalem, Pierre Krähenbühl, expressed his "anger and indignation", the role of the United Nations is one of absolute hypocrisy. Last week’s "deliberations" about whether the Zionist army was committing war crimes came to nothing, while the UN uses the card of the two demons to equate the Palestinian resistance with the slaughters and the ethnic cleaning by the terrorist State of Israel. Under no circumstances, and despite the acts of brutality committed even against facilities of the UNRWA, have the condemnations gone beyond a public statement, and the possibility of using sanctions on Israel was never even brought up.

The UN is neither more nor less than the link that gives an international cover to the wicked mechanism of mass murder that was started in Gaza.

It is about a system that functions based on an extreme cynicism: the Israeli army uses broad-scale terror on the Palestinian population, not only by intensifying the blockade that it has kept since 2007 and cutting off the tiny amount of light, water and fuel in the Gaza Strip, but by throwing handbills from its airplanes or calling the house of residents of Gaza to warn them that they have some few minutes to leave all their belongings, before a bombing begins. Those that decide to stay, to try to protect what little remains to them, are savagely murdered, and in many cases, entire families of up to more than 20 members die in a single bombardment, as happened last week. Those that, resigned and terrorized, find themselves forced to flee, as is the case with more than 200,000 Palestinians, that have already been displaced, because of the Zionist bombing and occupation, end up crowded together in buildings or camps like that of the UN that was destroyed today by Israeli missiles.

The idea that there is no place to flee to. Terror and collective punishment. Those are the tools that the Zionist army uses in its objective of carrying out an ethnic cleaning initiated more than sixty years ago against the Palestinian people.