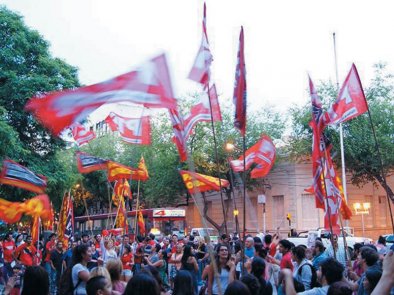 On February 22, the FIT slate, headed by Nicolás del Caño (PTS leader and national member of parliament) won 14% of the vote, the highest total of any left candidate for an executive position in Argentina in the last 30 years.. Del Caño was earned the second most votes for candidate in Mendoza’s capital with 9008, after the UCR’s Rodolfo Suarez, leaving behind two Peronist candidates. Del Caño took 3283 votes, following the candidate best positioned, Carlos Aranda, from the FPV, who won by 9% of the votes.

It has been always said that nobody votes in the Left for executive positions, but thousands of Mendoza’s residents have proven otherwise at this first election of 2015 in the country. The FIT (Workers Left Front), a political coalition composed of the PTS and the PO, that maintains and defends the worker’s political independence and champions an anticapitalist program, grew exponentially in the last four years. In 2011 at the capital city of Mendoza the FIT only gained 1% of the vote, but today has become the third-most powerful political force in the province. This episode caused a lot controversy and the Peronists to analyze the FIT’s votes.

The Peronists offered a number of interpretations, but few imagined this success. The FIT have been accompanying workers, women, and youth-in the streets as a strategy against those who govern for big businessman and their privilege. Without any success, the Peronists tried to advance the idea that Nicolás del Caño was a temporary phenomenon, that his votes were “angry” votes coming from the middle class. Without any doubts among the neighborhoods of professionals and the wage-earning middle class, the FIT won an important position among voters.

However the results obtained in neighborhoods such as San Martín, La Favorita, and La Cuarta Seccion (where city workers suffer job insecurity, working under the table, and lack of infrastructure that leaves them without water, transportation, and hospitals) showed that support for FIT comes from the depths of Mendoza, placing the FIT as the only real political alternative to the Right consensus of the opposition and Kirchner. Our proposal also resonates with large groups of young people who increasingly reject xenophobic, repressive, and “pro- life” speeches. No candidates outside the FIT stands for the right to legal abortion or denounces imperialist multinationals such as Lear or corrupt bureaucracies like Pignanelli and Pedraza.

The FIT is the only national political coalition fighting for these basic democratic rights. Thus, in Mendoza, the FIT led by Nicolás del Caño obtained positive results for the third time within the fifth electoral district in the country, demonstrating once again that the FIT is not a transient phenomenon but is, rather, here to stay.

The UCR advanced the elections without notice so as to have the vote in the middle of the summer, banned the youth’s vote (age sixteen and seventeen), and the provincial government eliminated the possibility of free and fair publicity among all parties. In the PTS, we increased our efforts by going out to protest and confront the maneuvers of the bosses’ parties,, bringing about new comrades for all our campaigning, walking from house to house in all neighborhoods of the city, organizing over two hundred prosecutors and using all possible resources to achieve our goal so that the voice of the unheard can continue to be listened to, bringing forward an alternative and independent program, and thus continuing in the making of history. We therefore prepare for our next election on April 19, with our comrade Noelia Barbeito as candidate for the province. And once again we will face the traditional capitalist parties in the province of Mendoza.