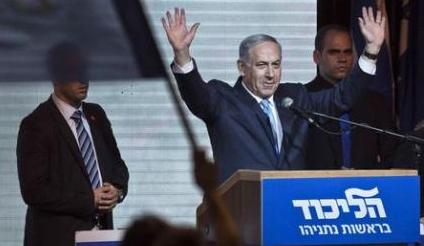 On March 17, general elections took place in Israel. Despite the fact that a more even result was predicted, with the nearly final count, Benjamin Netanyahu is getting a clear victory over his main rival, the Labor Party’s Isaac Herzog.

As was expected, none of the forces reached the appropriate majority of 61 seats in the Knesset (parliament), and now the negotiation to see who will be able to form a government begins. The result expresses the polarization and fragmentation that has characterized the Israeli political scene in recent years. The elections take place at a particularly turbulent time for the region as a whole and for the State of Israel itself.

With the population divided between the concern because of the rise in the price of rentals and the cost of living and the threats to national security, the election result favored the right-wing Likud party, that up to now would be getting 30 seats, against 24 of the Zionist Unity list. When the almost definitive results were known, Herzog admitted defeat.

Although President Reuven Rivlin will make the consultations among the parties in the coming days in order to entrust Netanyahu or Herzog with forming a government, at this point, it is clear that the Likud candidate will continue in office for another term. It goes without saying that he will receive support from what is at his right: the Jewish Homeland party of Naftali Bennett, that represents the religious right-wing and the settlers, and other smaller, ultra-Orthodox parties, to whom Netanyahu promised to keep the privilege of being exempt from military service, something that particularly irritates the erudite and liberal middle classes.

Someone who could be added to Netanyahu’s new government as Minister of Finances is Moshe Kahlon, a popular former leader of the Likud, that got some 10 seats.

But this coalition will not only have a very narrow majority, but it could also last only briefly. For some years now, a result of the crisis of the two traditional parties, the Likud and the Labor Party, the distinctive trait of Israeli politics has been fragmentation and its logical result, the instability of coalition governments. This uncertainty is a result of the fact that, among the partners, generally smaller parties, there is always something that does not coincide with the hard core of the politics of the majority party.

Only 26 months have passed since the last election; however, the situation seems to have changed completely, in relation to the consistent turn to the right of the most recent years. The previous government was dissolved last December, when Netanyahu expelled Tzipi Livni and Yair Lapid, the center wing of the government coalition. The reasons: the 2015 Budget and the opposition of these two Ministers to the controversial draft bill proclaiming the Jewish character of the State of Israel, which obviously leaves the Arab minority, who make up 20% of the Israeli population, marginalized.

With the moving up of the elections, Netanyahu was trying to consolidate a purely right-wing government. However, from December up to March, something changed the timing, and what looked like it was going to be an expressway to the victory of the right wing, ended in a neck and neck election race, although at the end, Netanyahu strengthened his right-wing profile and increased the gap over Herzog.

The liberal opposition to the Likud, the Labor Party and other forces from the center (calling it "center-left" would be too much), suspected the excess with Bibi and did what it had to do: a grand alliance – the so-called "Zionist Unity" – in order to remove him from power, headed by the Labor Party member Isaac Herzog.

Herzog’s rise in the election corresponds in large part to his programmatic adaptation to the concerns of the voters. He promised to spend 1.750 billion dollars on housing, healthcare and other social programs directed at the young people of the urban middle classes, at those whom he called the "sandwich generation."

One fact from the election is that the Labor Party seems to have recovered, after years of crisis and fragmentation. It did not get so many seats in Parliament since 1992.

There were other novelties. At the request of the ultra-rightist Foreign Affairs Minister Avigdor Lieberman, the minimum necessary to enter the legislature was raised to 3.25%, in order to leave out the smallest parties. However, the most interesting part of this measure was its collateral effect: for the first time, the four Arab parties (communist, nationalist, and Islamists) were on a common list, which gave the Arab minority a reason to go vote in numbers that had not been seen since 1969. If the tendency persists, the single list of Arab parties will be the third force in Parliament, with 13 seats.

It is obvious that the Likud and the Labor Party are two wings of the same colonial project against the Palestinian people. But that does not mean that there are no differences, both on the domestic front and in foreign policy.

The key part of Netanyahu’s campaign was to position himself as the leader of the extreme right. He ignored the social demands – increasingly audible and with an expression in the streets – and took as his only banner, the security of the State of Israel.

In that race, he probably overreacted. On the international plane, he snubbed the French President, F. Hollande, who had asked him expressly not to go to the mobilization after the attacks against Charlie Hebdo and a Jewish supermarket, so as not to alienate the five million Arabs who live in France even more. Bibi not only put himself in the first row, but, furthermore, he had himself applauded in the entrance of a synagogue.

Afterwards, he challenged no less than President Obama in the United States: he accepted the invitation from the Republicans to visit the US, bypassing the White House and speaking in the US Congress against the agreement that the United States and five other powers (Great Britain, France, Russia, China and Germany) are negotiating with Iran.

At the close of the election campaign, he said for the first time, in a more open manner than ever, that there was never going to be a Palestinian state while he was Prime Minister, in open opposition to the "two-state" solution, one of the White House’s main policies to solve the conflict in the Middle East. As if that were not enough, on Election Day, with openly racist arguments he harangued the right wing to go vote. He said the Arabs – who are Israeli citizens – were participating in the elections as never before.

In Netanyahu’s latest term, the State of Israel has qualitatively worsened its international image. It has lost legitimacy for its constant military aggressions against the Palestinian territories, as the enormous unpopularity of Operation Protective Edge, the most recent war-mongering offensive against Gaza, showed. To this is added its persistent provocative policy of expanding the colonists’ settlements on Palestinian territories. Ever more European states are willing to recognize the Palestinian Authority as a state entity in the United Nations; thus, presenting a motion to end the occupation could be a step. This, which means little or nothing to ending the colonial oppression to which the Palestinian people are being subjected, has, however, some undesirable consequences for the Zionist state. On April 1, Palestine will formally join the International Criminal Court, where the President, M. Abbas, could present charges of war crimes against Israel.

This international isolation makes Israel increasingly depend on the diplomatic support of the United States, especially on its veto in the United Nations.

It is no secret that Zionist Unity had the sympathy of Obama, who, as is known, has had an increasingly tense relationship with Netanyahu and would have preferred a new government with a less dysfunctional position for his plans overall in the Middle East. The Likud and the Zionist right wing, allied with the US Republicans, are an obstacle for the plans of the White House, the main priority of which is the defeat of the Islamic State, that still occupies a third of Syria and Iraq, that is, a territory of a size equivalent to Great Britain. For this, Iran’s cooperation is indispensable.

Undoubtedly, Netanyahu’s continuing in office predicts tensions and friction with the US President, although the strategic alliance between the State of Israel and the United States will in no way be in question.