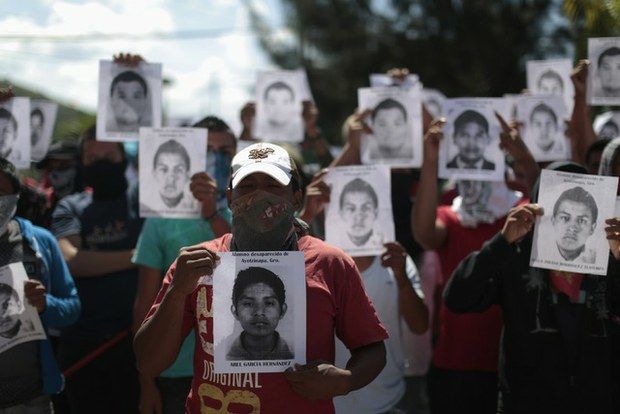 Political crisis in Mexico after the Iguala massacre

The execution of 22 alleged criminals in Tlataya, Mexico State, at the hands of the army last June and the massacre of student teachers in Iguala, Guerrero, have opened up an institutional crisis in Mexico. This, in a context of the rise of the impunity with which the groups of drug traffickers and hired killers, that fill the streets with corpses, are acting, where the ungovernable nature is obvious.

The open institutional crisis is a result of state violence, the complicity of civil servants with organized crime, the complicit friendship of President Peña Nieto (PRI) with the repressive PRD Governor of Guerrero (Ángel Aguirre Rivero, formerly of the PRI), and Aguirre Rivero’s inexplicable support for the Mayor of Iguala, pointed out as a murderer of opponents of his administration and as responsible for the massacre and disappearance of the student teachers from Ayotzinapan.

There is great outrage because of the ease with which the Mayor of Iguala, marked as a drug trafficker, could escape without the Governor’s taking preventive measures, or that the federal government did not intervene immediately (10 days later, it took control of security in the state).

Obama’s administration is pushing Peña Nieto now to resolve this crisis that is damaging the image of a return of the PRI to power, while the Senate is demanding that it be investigated fully – a necessary imperialist hypocrisy, in order not to be so stuck to its junior partner.

In Europe, where the main dailies point out Mexican justice as savage, the European Parliament threatens to freeze "any modernization of the bilateral agreements" with Mexico. And this loss of prestige of the institutions is not desirable for the democratic transition recommended by the great powers.

The disappearance of the 43 student teachers and the possibility that the corpses found in clandestine graves are theirs, increases discontent nationally and the popular mobilization – even corporate groups marched against the lack of safety and the power of the drug traffickers.

In the October 8 march in repudiation of the massacre of the student teachers, more than 60,000 people mobilized; there were actions in Guerrero and in the majority of the states of Mexico. "Murderous government!" "The President must resign!" "Punishment for Governor Aguirre!" "They’re not the only ones!" were heard loudly. Even Cuauhtémoc Cárdenas, the moral leader of the PRD, was pointed out in the march as an accomplice, because he belongs to this discredited party.

The messages on the President’s national channel are not enough to repair his image, nor is the order from Los Pinos to its main embassies in the world to disseminate his "categorical condemnation" of these "shocking" murders. After only two years of the PRI government, the international disrepute is tremendous.

This has led Luis Vedegay, the powerful Secretary of Finance, to declare that this situation will probably affect foreign investments in Mexico, in a context of very weak economic growth.

It is a crisis that also touches the PRD, the party that, from the center-left, served as a support of the regime of alternating parties, that emerged facing the terminal crisis of the rule of the PRI.

And it not only shows this party tied to the drug cartels, that are imposing or co-opting candidates to government positions, but it weakens this important ally of the PRI, that has been diverting popular dissatisfaction against the government. Now criticism of its alleged oppositional character is intensifying.

Thus, the million-dollar sums invested to promote the government’s image internationally, do not prevent national and international condemnation, in the face of the situation that the country is going through and the fate that the militant opponents are suffering. On Saturday, October 11, during a radio program, in the booth, two hired killers murdered the leader of the movement of people displaced from Presa Picacho, in the state of Sinaloa.

The slaughter of students has deepened the polarization and stimulated the mobilization in which the demands of students, teachers, and peasant communities are showing their potential to call for the resignation of the Governor and the dissolution of powers in the state.

At the same time, a democratic movement is beginning to emerge, that is already organizing another march for next week, demanding the appearance alive of the student teachers of Ayotzinapa.

A dilemma has arisen for the PRI, that in the coming year will face elections for Governors and State Congresses. In these elections, the whole 500 seats of the Chamber of Deputies, 9 Governor’s offices, 641 Council offices in 17 states, 993 mayor’s offices in 16 states and the 16 chief delegates in the Federal District, will be renewed.