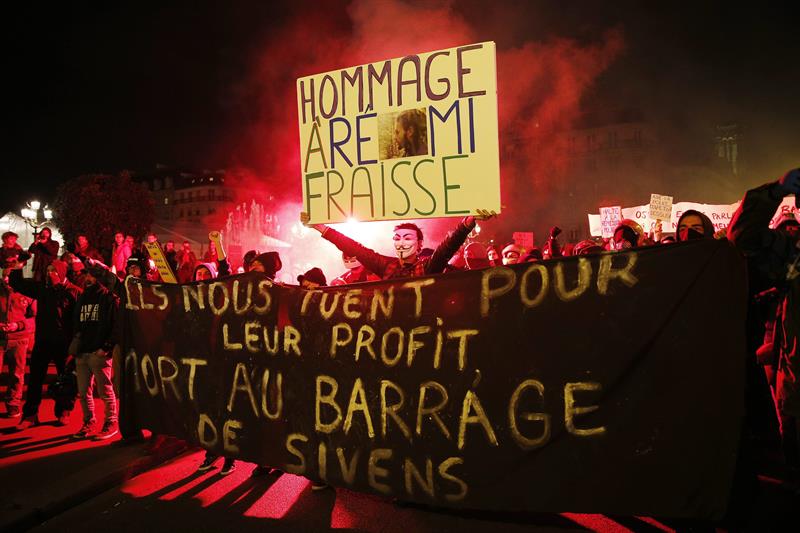 On the night of October 25-26, a young man, 21 years old, an environmental activist, Rémi Fraisse, was murdered by the French police during a protest against the construction of a dam in the south of France. While the weak government of François Hollande was seeking to make its "authority" worth something, this crime could cause quite the opposite. For the time being, only the great "respect for the republican institutions" of reformist parties and organizations and even of groups of the "far left," allows the crisis not to intensify and turn into a massive popular mobilization.

A crime by the state

The murder of Rémi Fraisse is clearly a crime by the state, that reflects, in a tragic manner, the recurring police violence against the residents of impoverished neighborhoods, against social struggles and the workers’ resistance. Although Rémi is the first to die in a demonstration since 1986 in France, both physical and "administrative" repression is standard practice in this imperialist country.

The "improvement" of the methods of repression permits not going as far as the murder of demonstrators, but indeed using means of intimidation, like seriously injuring and mutilating (losses of eyes, etc.) through the use of "non-lethal weapons." Not to mention the murders of young people from impoverished neighborhoods, in the hands of the forces of repression that have been "made" completely "invisible."

In this sense, the murder of Rémi Fraisse is the result of this policy of constant repression of the popular mobilizations by the state, regardless of whether it is the right or the "left" that is in power.

Indeed, Rémi was murdered by the explosion of a "concussion grenade" in a demonstration against a useless construction project of a dam that was seriously going to effect the ecosystem of the area.

Contempt and cynicism of the bourgeois political caste

The government has tried to conceal the responsibility of the police in the murder of Rémi, some even trying to present him as a sort of "extremist," a "Khmer Green," and, in some way, "responsible" for what happened to him.

It is in the continuation of this provocative attitude that several demonstrations in homage to Rémi that were carried out in big cities like Toulouse, Rennes or Nantes, were also repressed by a large deployment of police. In Paris, the government even went so far as to prohibit the march called by several political and union organizations!

And, as if these provocations were not enough, on Tuesday, November 4, when an environmental Deputy asked for a moment of silence in Parliament for Rémi Fraisse, the President of the National Assembly, Claude Bartolone, from François Hollande’s Socialist Party, interrupted her, by stating: "Traditionally, we only salute, with a moment of silence, the demise of a member of the armed forces or of hostages." A scandalous attitude that shows the amount of rotting of this caste of bourgeois politicians.

Breaking with respect for the "republican institutions"

This does not mean that the government camp is solidly united. It is quite the contrary. This new crisis is aggravating the struggle among the different factions of the government camp and associates (like the Green Party), that are trying to exploit the murder of Rémi to prevail over their "domestic rivals." For its part, the right-wing opposition is keeping silent, a clear sign of "support" for the government in this matter, even though they say that their silence is in support of "the police forces."

However, what constitutes more of an obstacle to this crisis’ being more profound and having an expression in the streets through the mobilization of thousands of young people that reject this crime, is the policy of respect for the "republican institutions" by the reformist and bourgeois environmentalist organizations (PCF, Left Party, Greens, etc.) and that of some unions and groups of the "radical left."

Thus it is that, faced with the prohibition by the state (!) of the Paris demonstration against the murder of Rémi, these organizations decided to withdraw the call to demonstrate, contenting themselves with submitting to a silent, non-militant gathering, organized by Rémi’s family.

This time, even the New Anti-capitalist Party (NPA), that in July had correctly defied the prohibition against demonstrating in solidarity with Palestine, preferred not to support the call to the march.

This is unacceptable. The exploited and oppressed do not have to ask the permission of anyone, much less their own oppressors, to demonstrate against a political crime like the one that killed Rémi Fraisse. We cannot respect the framework imposed by our own exploiters. Here it is not simply a matter of the life and the memory of this young activist; it is an attack against all the activists and militants that oppose the different projects of the dominant classes. If the crime against Rémi does not encounter greater opposition and popular resistance, the balance of forces will deteriorate for our class.

The government fears the mobilization of young people like the plague, because it knows very well that it could be the spark that sets off the working class and other groups. What happens in the coming days in the student movement, in the universities and the high schools, will undoubtedly be fundamental for the struggle for justice for Rémi and against police violence and the crimes of the imperialist French state against all the oppressed and exploited.