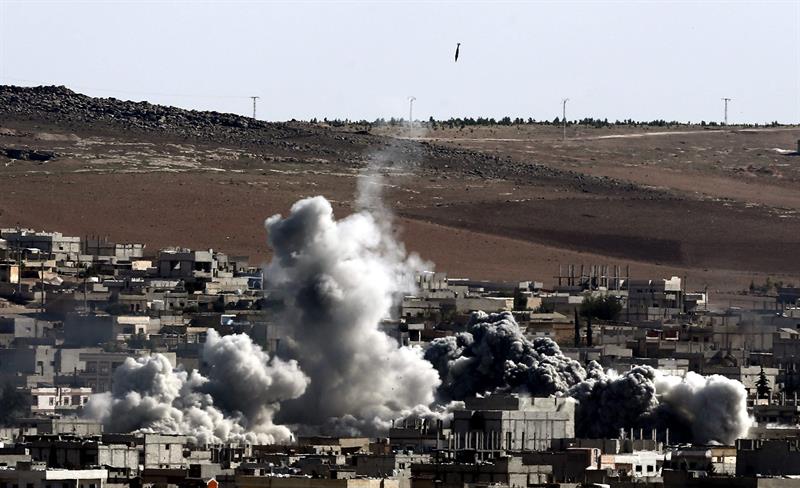 Islamic State The US intervention in Syria and Iraq

The events of the Kurdish city of Kobani constitute an episode of the war launched by Obama against the Islamic State (IS); he intends to advance on that city located in northern Syria, near the border with Turkey. The Turkish government, an historic enemy of the Kurdish people, refused to confront the IS to prevent the strengthening of the Kurds, although now the Minister Mevlüt Çavuşoğlu has announced that it will allow the passage through its territory of aid for Kobani, coming from the Iraqi Kurds.

Turkish Prime Minister Erdoğan rejected this type of measures, because inside Turkey live 15 million Kurds historically oppressed as a nation, that are fighting for greater degrees of autonomy and national rights, that Turkey refuses to grant or wishes to give in a controlled manner, subordinated to its own interests. This is the basis of the armed conflicts that the Turkish government has historically maintained with the PKK, a Kurdish party in Turkey, that was founded in 1978, to fight for Kurdish independence, and that has a big military wing. Since 1999, its leader Abdullah Öcalan has been a prisoner in Turkey, and although Turkey, together with the US and the European Union, considers the PKK a terrorist organization, since 2012, they have been negotiating a process of détente [a "relaxation of strained relations"].

Aid to the Kurds of Kobani, after weeks of inaction

The US has also really been exercising "laissez faire" on the Islamic State in Kobani (and against the Syrian Kurds in general), a city that, as Secretary of State John Kerry declared last week, was not a "strategic target" of the US in the war against the Islamic State. On one hand, because the priority was on the confrontations in Iraq, where the Islamic State controls oil wells that allow it to support itself, and where the Islamists continue advancing, owing to the political contradictions of the new Iraqi government, that is not managing to attract Sunni groups and remove them from the orbit of the Islamic State. But also because the Kurds of Kobani and northern Syria did not make it clear if they would subordinate themselves to US control as their Iraqi compatriots did more than a decade ago.

But this weekend it was made known that the US has held meetings with the YPG, the Kurdish militia of Kobani, that, for weeks, has been resisting the Islamic State’s offensive, after which Kerry drastically changed his speech, by suggesting now that "it would be irresponsible to turn away from a community that is struggling against the Islamic State." More concretely, in the last 4 days, the US has begun to throw material aid inside Kobani and seriously to bombard the positions of the Islamic State that surround the city, now tipping the scales towards the side of the Kurds.

The White House’s change of direction, after almost a month of siege of Kobani by the Islamic State, has nothing to do with any "humanitarian" interest of US imperialism, but with a strategic problem in the US’ struggle against the Islamic State in Syria. In this country, after three years of a civil war between Al Assad’s army and the different rebel factions, a myriad of militias and armed groups has remained, many times with confrontations among them, some opposing US intervention, that do not have an ability to confront the Islamic State. Then there is no one who will provide the troops that the US does not want to commit, but that it inevitably needs to, if it wants to advance against the Islamic State, since, as is known, it is impossible to win a war without troops on the ground. The Syrian Kurds, with their bitter resistance in Kobani, appear to prove that they are the only ones with true strength and determination to confront Islamic radicalism. For that reason, on Saturday, October 18, the US President himself, Barack Obama, personally called Erdoğan to press for concrete actions from Turkey against the Islamic State in northern Syria and especially in Kobani.

Rearrangements that do not solve the crisis

Thus, the Turkish government changed its position on the war overnight, as shown by the statements of Cavusogluy, who began to collaborate minimally with the Kurds, although for now without getting directly involved in combat with the Islamic State on Syrian territory. Let us recall that until now it was not giving aid, and it even harshly repressed Kurdish mobilizations that were demanding Turkish intervention against the Islamic State. In this way, rearrangements are being made in the war, that can change the power relations against the Islamic State, that, until now, has been enduring US bombardments. The Arab countries that form part of the "international coalition" headed by the US and that have not been intervening, could start doing so, beginning with Turkey’s change of direction.

Nevertheless, this would not solve the crisis, since it does not resolve the basic political problem in Iraq, where the government cannot achieve a minimal consensus with the Sunni leaders, which provides the Islamic State a social base where it can be supported. Nor does it resolve the situation in Syria, where the struggle against the Islamists objectively gives encouragement to President Al Assad, an enemy of both the US and Turkey.

At the same time, these re-arrangements would open the possibility that the Kurds of northern Syria and of Kobani would get closer to US imperialism, as their Iraqi peers have done. An option that would only bring greater miseries for the masses, from increasing the chains of imperialist oppression over the region and the Kurdish nation.

Kurds: They constitute the most numerous national minority in the world without a right to its own state. They are settled in the territory of Kurdistan, that includes regions of Turkey, Iraq, Syria, Iran, and Armenia, while 1.5 million Kurds reside in Europe. The US has always backed Turkey, that is oppressing 15 million Turkish Kurds, although Turkey is now permitting the passage of aid for the Kurds of Kovani, against the Islamic State.

Islamic State: A detachment of Al Qaeda that occupies vast areas of Iraq and Syria, a territory with the dimensions of Belgium, with the aim of establishing a caliphate based on Sharia (Islamic law), beginning with an alliance with Sunni Muslim tribes dissatisfied with the government of Iraq. It was initially financed by Saudi Arabia and the Arab Emirates.