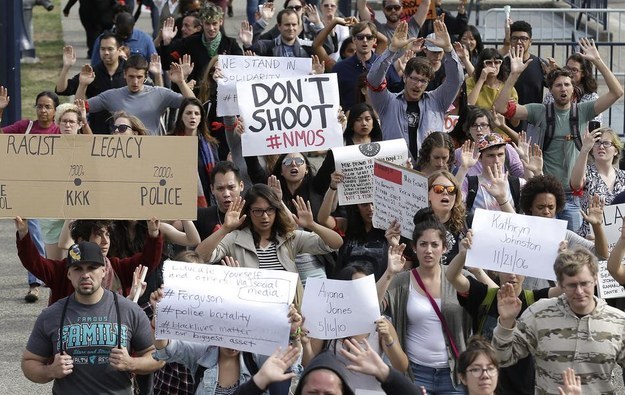 Racism and police brutality in the US

The murder of the young African-American Michael Brown, at the hands of the Ferguson city police, less than two weeks ago, has again ignited anger in the US against racial oppression, which has caused thousands to get mobilized throughout the country.

The response to the anger unleashed by the death of this young man, who was unarmed, has been repression. As time passes, more information about his death and the increasingly brutal police violence is being made known.

There are plenty of causes

The demonstrations that have been growing for more than ten days in Ferguson, transforming it into a city in rebellion, as well as the national day with actions in more than 90 cities last week, reveal a big group that is going out to demonstrate in opposition to the police action against the African American and Latino population in a way that young men like Michael Brown are stigmatized.

The most widely known in recent years are Oscar Grant in Oakland and Trayvon Martin in Florida, but they are not the only ones. In the last month alone, three other African-American men became fatal victims of the police.

In the case of Michael Brown, the first information provided by the local authorities failed to specify the number of gunshots that he had received. But the results of an examination requested by his family determined that the young man received 6 shots from the front, two of them in his head. This investigation also confirms that Brown had his arms raised at the moment they shot him, as his friend Dorian Johnson, who was with him at the time of the events, has stated on several occasions. That is, it was a real execution.

To the shocking results of the autopsy was added a video of absolutely provocative content, made public by the police, where Brown allegedly appeared on the scene of a robbery, something that the family has denied and that has produced still more hatred, increasing the protests.

After several demonstrations, the local police made public the name of the cop that shot Brown, Darren Wilson, who was fired and removed from his position, but who still remains free, without an arrest warrant against him.

Jay Nixon, the Governor of Missouri, declared the state of emergency and a curfew last weekend, measures that failed to silence the protests. For this reason, he requested the entry of the National Guard into St. Louis County.

The police provocations have continued to increase in the most recent nights, with the use of tear gas and even new people injured, 3 of them seriously, and more than 100 arrested. With these scandalous methods, they are trying to avoid a scenario that could be repeated, as it was in 1992, in Los Angeles (during the "Rodney King riot"), when between 50 and 60 people died as a result of repression by the police. To this was added the murder of another young African-American man on August 18, at the hands of the County Police, only 3.7 miles from Ferguson. There also, where the population is mainly of African descent, protests against police violence were being carried out.

The National Guard and the increasing militarization of the police

In an unprecedented event, HRW (Human Rights Watch) and Amnesty have sent observers, because of the brutality of the repression, and even the UN declared itself this week in opposition to racial violence and repression against the demonstrations, that, according to Navi Pillay (UN High Commissioner for Human Rights), resemble the racial violence of the apartheid regime in South Africa.

The local population has condemned the militarized response of the police force, that includes policemen prepared with battledress, armed with automatic rifles and armored cars. The Pentagon itself allocates arms and munitions for local police. The same things the US uses to invade and murder in countries like Iraq and Afghanistan.

The National Guard has also been called to join the military deployments against the demonstrators and the young people. The National Guard is the state militia, whose function is to get mobilized in natural disasters and also to tackle situations of "public disorder," but its main aim is the defense of private property. This force has stood out because of its racist role, as was seen during Hurricane Katrina in New Orleans in 2005. There the National Guard gave priority to rescuing the white population, while the African-Americans survived crammed into the football stadium, and it set up a curfew, with the pretext of avoiding looting.

The persecution and criminalization of the African American and Latino population in the US are not something new. Once more, the debate about the applicability of racism and inequality in this country has be opened. According to a study published by the Washington Lawyers’ Committee, most African Americans undergo some arrest in the course of their life. Although they are 16% of the total population, they make up 50% of the prison population, with their rate of imprisonment being 6.5 times greater than that of whites.

In Ferguson, an enormous disproportion between the majority status of the African American population and the predominantly white authorities continues to exist. The crisis that the murder of Michael caused, has spread to other spheres of power. Obama had to interrupt his vacation and publicly take a stance, although calling cynically for remembering Brown "through reflection and understanding" and for staying in "peace and calm," while the city was militarized.

The illusions in the first Black President continue to be demolished, as shown by the continuation of racial oppression and oppression of the immigrants and imperialist policy in the Middle East, among other regions of the world, proving in turn that imperialist policy is not only directed overseas, but also towards the exploited and oppressed groups of the US’ own population, as the high rates of those of African descent in the prisons, those who perform the most precarious jobs, and those who have less access to university education, show.

Armed to the teeth

The 1033 Program of military weaponry is a policy that began in 1997, from which the states can get military arms without relying on federal regulations, and from which billions of dollars have been invested. This has increased the power of the armed forces and of the police nationally in the most recent years. The militarized response in Ferguson is one of the results of the development of this policy.

The SWAT (Special Weapons and Tactics) teams, that were originally created in the 1960’s and 1970’s, according to the researcher Peter Kraska, have increased considerably in the last 30 years and their role has expanded. This expansion was mostly managed by the FBI. In turn, the training that the police receive is directly military, created precisely to patrol places with a majority nonwhite population, through increasingly repressive practices.