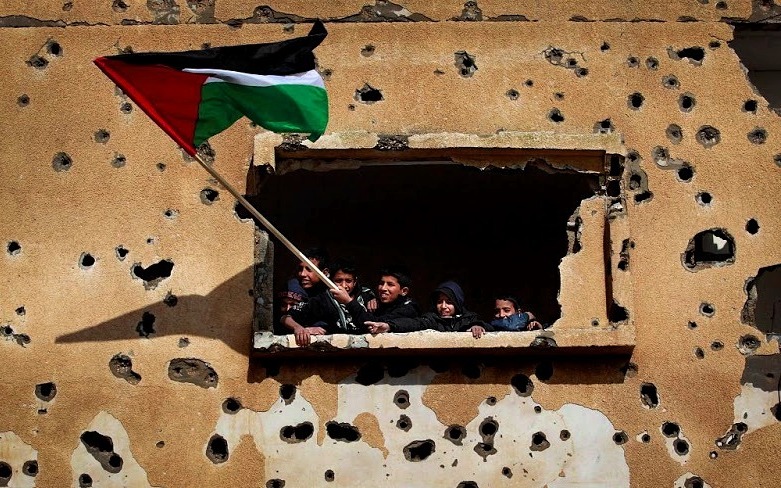 On June 12, 2014, three Israeli students were kidnapped while hitch-hiking towards Gush Etzion, just north of Hebron in the West Bank. Hebron is a group of twenty-two Israeli settlements south of Jerusalem. Hamas welcomed this kidnapping, without actually claiming responsibility, contrary to other Islamist groups. Moreover, the Palestinian government has taken part in the search for the kidnapping victims by the sides of the Israeli State. However, the Israeli Prime Minister Benyamin Netanyahu decided to directly lash out at the Palestinian State that he holds responsible for the kidnapping because it is in the hands of Hamas, while the two arrested suspects are not part of Hamas and actually belong to a clan generally hostile to this latter. Finally, the Israeli government, as usual, prefers a policy of collective punishment, to hold the whole Palestinian population responsible for this kidnapping, and to lead a genuine armed intervention against them.

In reaction, the Israeli government found nothing better to do than to militarily intervene on the pretext of “collective responsibility”. More than 400 people have been arrested, including religious representatives (imams), but also teachers, as well as 2,000 police raids and building demolitions. Five Palestinians have been killed during these operations, including three children. And the reactions were important especially as the bodies of the three students were found on June 30. “Hamas is responsible, Hamas shall pay,” declared the Israeli Prime Minister, Benyamin Netanyahu, threatening Palestinians with heavy retaliation. The imperialist governments of France and of the United States have given their go-ahead to this attitude by condemning the murder of the three students, yet keeping quiet about the brutal methods used to find them. Hamas accuses the Israeli government of using this as a pretext to intervene in and attack the Gaza Strip, all while using the legitimacy of the international community’s support. Thus, the Gaza Strip, controlled by Hamas, has been the victim of numerous air-raids, 34 air strikes taking place in the night of June 30 after the announced death of the three teenagers, but on the pretext of rocket fire coming from Gaza earlier in June. The Israeli government’s target is thus the entire Palestinian population, held solely responsible for the murder of the three students. Clearly, Israel hopes to reduce the Palestinian people and to continue its oppressive policies with impunity in Palestine. And all of that coupled with a communications campaign full of hatred and racism...

Since the kidnapping of the three young Israelis on June 12, Israel has been leading a campaign of accusation, attributing the responsibility of the abduction to the Palestinian people on the pretext that the Palestinian government, led by Hamas, is hostile to the State of Israel. Pointing out a supposed “collective responsibility” on the part of the Palestinian people, the Israeli government has brought about serious consequences on the Israeli public opinion. Thus, on July 1st, in Jerusalem, hundreds of Israeli protesters called for revenge, for the death of Palestinians. The social network Facebook was also a vector of this promotion of hatred, racism and revenge, followed by thousands of people. More so, one could see military, police officers and even civilians posing with firearms in pictures with deadly messages such as “Death to Arabs”.

On July 1st, in the evening, a young Palestinian was kidnapped in the neighborhood of Chouafat in East Jerusalem, occupied and annexed by Israel. He was later found burnt to death. It is most likely an act of revenge committed by some Israeli citizens encouraged by the policy of hatred put in place by Netanyahu’s government. Moreover, the reaction of the Israeli government with regards to the murder of this young Palestinian was clearly different than its reaction with regards to the murder of the three Israeli students. The Israeli Minister of Interior Security, Yitzhak Aharonovich, even went so far as to ask Palestinians to pipe down with their accusations against Israelis.

Put a stop to the criminal policies of the terrorist State of Israel !

What we can affirm in the light of these events in the Middle East is that the Israeli government continues to deploy a racist and colonialist policy with regard to the Palestinian people. It clearly took advantage of the kidnapping of its three settlers in order to legitimize its interventions, its police raids, its bombings, and all of its oppressive arsenal against the Palestinian people.

We can only express our solidarity with the Palestinian people. We are for that matter profoundly convinced that the only realistic solution to permanently establish fraternal relations between Muslims and Jews is the abolition of the State of Israel and the construction upon its ruins of a Proletarian and Socialist Palestine in the larger framework of the struggle for a Federation of Socialist States in the Middle East. The role of revolutionaries is not simply to support the resistance of our Palestinian sisters and brothers against the brutality of the State of Israel, but to weaken its principle partners, that is to say the principle imperialist countries. The struggle against “our” own imperialism is the best way, precisely, to create the best conditions for the liberation of all peoples in the Middle East.