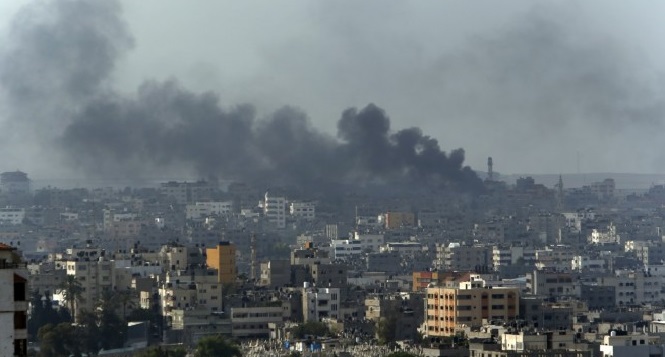 They are bombing Gaza again

After 10 days of a truce during which no agreement for a ceasefire was reached, the State of Israel again bombed the Gaza Strip from Tuesday, August 19. Taking as an excuse the launching by Hamas of 3 missiles that fell on Israeli territory without causing victims or material damages, Prime Minister Benjamin Netanyahu’s Zionist government ordered the resumption of the military offensive. More than 80 aerial attacks were carried out, with a toll of almost 30 Palestinians dead and dozens of wounded. The main target of the Zionist army was the chief of the military wing of Hamas, Mohamed Deif, who directs the al-Qassam Brigades. For this, the Zionist army launched five missiles on his home, killing his wife and eight-month old son. The fate of Deif, who was living in hiding, is still unknown.

After the attack on its leader, Hamas threatened Israel, saying it had opened "the gates of Hell," and, according to the Israeli army, the Islamic militia has already launched some 180 rockets against Israel’s territory, some of which reached Tel Aviv and Jerusalem. The assassination of senior leaders is a frequent practice of the Zionist state, to strike at the Palestinian resistance. Deif himself has already suffered five attacks, in one of which he lost both legs. It is another one of the tools this terrorist state uses to carry out ethnic cleansing against the Palestinian people, like the massive bombings on densely populated territories, the legalization of torture in the jails, or the repression of peaceful mobilizations, with weapons of war.

The truce and the indirect negotiations in Cairo, with the mediation of al-Sissi’s coup-plotters’ government and of al-Fatah (the Palestinian wing, collaborating with Israel and imperialism), failed, because the Zionist leaders do not want to stop their military offensive, unleashed on July 8. Protective Edge is already the biggest and bloodiest military offensive since Israel withdrew from the Gaza Strip in 2005: a month of massive bombings and an invasion by land, more than 2,000 dead Palestinians and 10,200 wounded, almost half a million displaced, entire neighborhoods reduced to rubble in Gaza and other cities, the infrastructure and essential services having totally collapsed, schools, mosques and hospitals bombed. However, and despite having destroyed dozens of Hamas tunnels, Israel was not able to achieve its main military objectives, like neutralizing Hamas’ ability to launch rockets, nor to eliminate Hamas’ main leaders. In that situation, the Zionist government had to accept the truce and the negotiating table in Egypt, to limit international pressure, that was increasing at the same time that the massacre was developing and the war crimes against the Palestinians.

The war-mongering line of the Zionist government

But Israel immediately put insurmountable obstacles on the negotiation, like the demand for disarmament of the Palestinian militias, at the same time that it refused to agree to any of the Palestinian demands, like ending the blockade, the reconstruction and opening of the airport, the construction of a naval port, and release of the more than 500 Palestinians arrested in the most recent months. In this way, it forced Hamas not to sign any agreement, and obtained with that, new excuses for continuing with its military offensive.

This war-mongering orientation of the Israeli government, promoted from the beginning by the group of the Zionist ultra-right-wing, headed by Chancellor Avigdor Lieberman (who is pushing for "defeating" Hamas and throwing it out of the government of the Gaza Strip), was imposed in the heat of the attacks on Gaza and of the rightward drift of Israeli society. Several Ministers from the Likud, a Zionist party of the conservative right wing, led by Netanyahu, are now rejecting the negotiation in Cairo and taking up the rhetoric of the ultra-right-wing. Interior Minister Gideon Sa’ar expresses it this way, "One can reach calm through a war of attrition, and one can achieve it through a ground operation against Gaza City. The objective must be breaking the military strength of Hamas or suppressing it" (AJN, August 20).

The failure of the negotiations in Egypt and the new escalation in the conflict show once more the colonialist and war-mongering character of the State of Israel, that suppresses the Palestinian people and tries to end their resistance. This state, based on ethnic cleansing and imposition of an apartheid regime against the Palestinians, is incompatible with peaceful coexistence between Arabs and Jews. Without politically supporting Hamas, an organization that intends to keep capitalist exploitation and impose a theocratic state, we are unconditionally with the Palestinian resistance with the perspective of the struggle for a workers’ and socialist Palestine in all its historic territory, that will allow Arabs and Jews to be able to live freely.