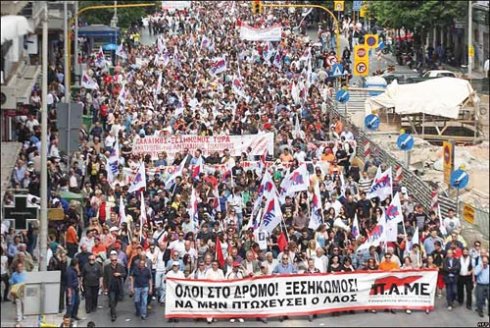 Campaign for the cancellation of debt and opposition to austerity plans

The "troika" of the European Commission, European Central Bank and the IMF are putting pressure on the government of Greece, threatening to switch off their funding so that the Greek government submits to the "troika’s" programs of debt repayment and structural adjustment. These programs, with the complicity of the Greek bourgeoisie, have plunged the country into misery. In the face of this blackmail, it is necessary to organize the broadest international solidarity with the workers and people of Greece. What is needed is a campaign for the cancellation of debt and of opposition to these austerity plans.

On January 25, the vast majority of the Greek people voted for Syriza [Coalition of the Radical Left]. In this way, they expressed their will to no longer continue to pay with their unemployment and their misery for the "rescue" of Greek capitalism and the big imperialist banks through the "memoranda" imposed by the infamous "troika" with German Chancellor Angela Merkel at its head.

The traditional capitalist parties that have been implementing these cuts suffered a resounding defeat. The forces of left - Syriza, KKE [Communist Party of Greece] and Antarsya [the anti-capitalist left front] - won 42.5% of the vote.

The Syriza government took office on the impossible promise of no longer pursuing austerity plans while simultaneously coming to an agreement with its creditors, the same people that demand that the government applies their adjustment plans in order to repay the debt and to keep Greece within the European Union and the Eurozone.

But the illusion that Greek Prime Minister Alexis Tsipras has of getting his European "partners" onside to allow for a little room to manoeuvre will be very short-lived.

As soon as they took office, the leadership of Syriza headed off on a tour of European capital cities to obtain support for their debt renegotiation plan. Tsipras and Finance Minister Yanis Varoufakis were even supported in the declarations of the US President Barack Obama, who demagogically took advantage of the situation in Greece to put forward his position in his dispute with Angela Merkel about the need to move from the politics of austerity to the policy of stimulus. Needless to say that Obama does not care about the suffering of the Greek people, but only about the crisis in the European Union putting the recovery and the interests of the United States at risk.

Nevertheless, Varoufakis’ pilgrimage ended in defeat. And the troika did exactly what is in its imperialist nature to do: blackmail the "anti-austerity government”, and hence the Greek people who in their majority voted for this government, so that they lower their expectations and submit to the program of cuts and structural reforms. Angela Merkel’s "crusade" has been joined by the Spanish Prime Minister, the right-wing Mariano Rajoy. In addition to defending the interests of the Spanish banks in Greece, Rajoy fears that any easing off of EU pressure that Syriza obtains will give strength to the left-wing Podemos [We Can] party in the upcoming elections. The so-called friends of Tsipras, French President Hollande and Italian Prime Minister Renzi, ended up lining up with Frau Merkel and together have forced Greece up against the ropes.

The blackmail of the "troika"

As is well known, the European Central Bank decided to stop accepting Greek bonds as security for the financing of the country’s banks. As a consequence of this measure, the burden will fall onto the Bank of Greece, the country’s central bank. The safety valve for the prevention of a banking crisis is the availability of the ECB’s so-called Emergency Liquidity Assistance line of credit, even though this mechanism is only temporary (as the ECB monitors it and decides on whether or not to maintain it) and in addition, it also has a significantly higher interest rate.

The tug of war between the troika and the Greek Government continues this week with the meeting of Eurozone Finance Ministers on February 11 and the EU Summit on the 12th, where they will most likely continue this policy of belt tightening. Through both neo-liberal conviction and domestic pressure, where austerity measures against Greece are popular, Merkel stands firm in her hard line.

The government of Greece speculates that, ultimately, Germany also has a problem: if all avenues of financing to Greece are closed off, and it is left with no other alternative than to quit (with a small contribution) the common currency, this could trigger a crisis in the whole of the Eurozone and so put the very unity of Europe at risk.

And Germany speculates that Tsipras will end up bowing down before risking the torching of his country and the Eurozone. And so far Germany seems to be right: from 2012 when Syriza was on the verge of Government, until now, when it is effectively the Government, Tsipras has diluted his program and tried to present himself as reliable to the Greek and European bourgeoisie. In a few days, his program moved from raising the need for a significant reduction of the debt to a more "realistic" plan of renegotiating the terms and methods of its payment: the plan as presented now consists of paying the debt in full, trying to extend maturities and tying debt payment to GDP growth. Meanwhile, in order to gain time, its plan is to get a "bridging loan" of 10 billion Euros to finance state expenditures for the next few months.

But between the good "paymaster" intentions of Tsipras and their realization there is a world, which includes the possibility that the workers and young people who have put their faith in Syriza will rebel if the Government fails to keep its electoral promises. Therefore - even if by accident and not by political will - there is the possibility of a catastrophic scenario opening up.

Rescue for the capitalists, hunger for the workers

Despite the "rescue" plans and the cuts that have been implemented since 2010-11, Greece’s debt has not stopped growing. Today it is approximately 177% of GDP, which is a 4% increase from the beginning of the restructuring in 2011-12. Of the 300 billion Euros owed by the Greek Government, 240 billion (80%) is made up of loans from European institutions within the framework of bailouts implemented through the European Financial Stability Fund. The looting is so scandalous that in spite of these austerity programs, Greece continues to be one of the main purchasers of weapons, at levels no less than those in Germany and France.

The Greek people are paying for the years of debt run up by the business of Greek and European banks and the major Greek capitalists, business that has been protected by the State and the parties that governed at their service.

For the vast majority of the population, the social consequences are catastrophic: the official unemployment rate edges towards 27%, wages and pensions have fallen, public spending cuts have damaged health and education. Almost half of the population (4 million out of a total of 11 million) live in poverty.

In the face of this social catastrophe, Tsipras has announced a series of minimal measures - an increase in the minimum wage, a suspension of cuts to pensions, tax office reforms that increase the tax burden placed on the very wealthy, returning electricity to homes that have had their supply cut off because the bills were not paid. These basic measures - although they are necessary – are in no way enough to reverse the effects of the capitalist crisis and the memoranda.

Even more importantly, the government program of Tsipras in no way refuses to recognize the debt and so make the Greek and European capitalists pay for the crisis. Instead it wants to continue paying the debt but renegotiate its terms with creditors, which as we well know in Latin America means mortgaging the future of the next generations who will have to carry this burden. To that effect, Tsipras is following the Kirchner Government’s example of "paymaster", which it takes as a reference.

Against the blackmail, with the workers and people of Greece

There is clearly a difference between countries such as Argentina that suffer from oppression and imperialist plunder, and Greece which, while lower-ranking than the countries of the European Union’s hard core, has a ruling class which is a part of this imperialist bloc. This is true even if today it is under strong pressure from Germany and has its lost national sovereignty under the tutelage of the troika.

Nevertheless, we are in no way neutral in this battle. We follow in the tradition of the Third International which in 1920 denounced the terrible oppression that the victorious powers exerted over Germany with the imposition of the Treaty of Versailles that submitted the German people to reparations and misery. The PTS [Partido de los Trabajadores Socialistas / Socialist Workers Party] and our international current [Fracción Trotskista - Cuarta Internacional / Trotskyist Faction - Fourth International] calls for the cancellation of the debt which sinks the Greek people into despair, as an integral part of a set of anti-capitalist measures that include the nationalization of the banks and the expropriation of the big companies under workers’ control, measures that point to a working class, socialist solution for Greece and for Europe.

We do not politically support the Syriza government, which has a program of tepid reforms and of keeping intact the European Union as a capitalist bloc.

Nor do we believe that we should support their position in negotiations of continuing to pay the debt generated by the Greek capitalists and the European bankers, who have enriched themselves and will continue to enrich themselves at the expense of the hunger of the majority of the population. Our solidarity is with the workers and the Greek people who have demonstrated an enormous will to struggle, with over thirty general strikes and stoppages against the austerity of the troika and the Pasok-New Democracy capitalist governments that have applied the memorandums.

But the Greek people will not win this battle alone. It is necessary to organize the broadest international solidarity with the workers of Greece. It is necessary for unions in Germany, France and Europe in general, to break their collaboration with the capitalist parties and governments and call for mobilizations in these countries in support of the Greek people. It is necessary for them to mobilize alongside all of Latin America which is suffering under imperialist oppression. This is particularly the case in Argentina, where we propose that the forces of the FIT [Frente de Izquierda y de los Trabajadores / Left and Workers’ Front] immediately launch a common campaign. We do this because we know that if Greek workers win, we will also take our own step forward in the struggle to end capitalist exploitation.