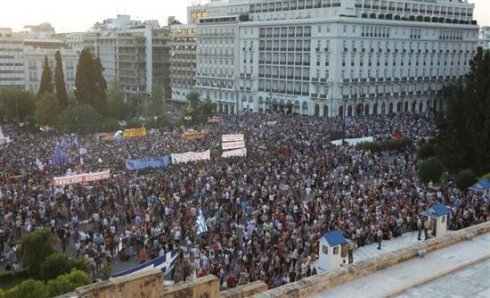 Drop Greece’s debt! No to austerity! Statement of the Trotskyist Fraction - Fourth International

The troika under the instruction of the German government and the imperialist banks have put Greece between a rock and a hard place. In spite of all the concessions made by the Syriza-led government, which had presented a plan accepting 90% of the austerity measures demanded by the creditors, European capital and the IMF are not satisfied and want further cuts. The European institutions want a total surrender by the Greek people. They want the Greek people to accept the payment of the debt and the EU austerity measures that have plunged the country into unprecedented misery. This has been accomplished with the complicity of the Greek capitalist class and its parties.

NO to the imperialist blackmail! Drop Greece’s debt! No to austerity!

The troika – the European Union (EU), the International Monetary Fund (IMF) and the European Central Bank(ECB) under the instruction of the German government and the imperialist banks have put Greece between a rock and a hard place. In spite of all the concessions made by the Syriza-led government, which had presented a plan accepting 90% of the austerity measures demanded by the creditors, European capital and the IMF are not satisfied and want further cuts.

The European institutions want a total surrender by the Greek people. They want the Greek people to accept the payment of the debt and the EU austerity measures that have plunged the country into unprecedented misery. This has been accomplished with the complicity of the Greek capitalist class and its parties.

Since the January elections in Greece, the troika deployed an array of threats and blackmail in order to impose new austerity measures and social cuts on the Greek working class and people. While the troika was increasing its pressure in the negotiations the ECB announced that it would stop financing the debt. Meanwhile capital continued to flood out of the country contributing to the possibility of a bankruptcy for the Greek State..

The Syriza-led government sought to negotiate an impossible accord with its imperialist creditors while Greece remained within the EU and the euro zone.

The Greek prime minister helped spread the illusion that it would be possible to achieve a ‘negotiated adjustment plan’ with the troika; one which would let the Greek economy recover and allow Greece to improve its ability to pay back the debt. These illusions have now evaporated before the reality of Capital´s demands.

After five months in government, Greek Prime Minister Alexis Tsipras and its government abandoned Syriza’s election promises to end austerity, crossing every ‘red line’ and accepting all the demands imposed by the troika. On Monday June 22 the Greek government signed a pledge to maintain the EU austerity memorandum and capitulated to most of the creditors’ demands, including deep pension cuts, the cutting of vital social services and the increase of the VAT. The troika is still demanding that Greece achieve a primary budget surplus and that it advance the privatisation process.

This has opened up a deep internal crisis within Syriza and between Syriza and its right wing nationalist allies. Leaders of Syriza´s Left Platform described the proposal as “unacceptable” and “worse than the initial rescue programme”. They also declared that they would not vote in favour of the agreement (in Parliament). Tsipras has found himself in a difficult position, seeking an agreement with Potami and other mainstream pro-austerity opposition parties.

However, despite all the concessions made by the Syriza-led government, the troika has demanded deeper cuts. The troika rejected the proposal presented by the Greek government and demanded steep increases in pension contributions while rejecting new taxes on corporate profits and luxury goods. It aims to force the Greek working class to pay for the crisis through the imposition of an austerity program. Its intention is for the Greek people to kneel down before the international institutions and for Syriza to surrender completely. Undoubtedly, the international institutions are not prepared to give an inch, even though they are negotiating with a government that has hardly challenged any of the adjustment measures proposed by the troika.

Faced with this situation Tsipras responded on Friday 26 June by calling a referendum on Sunday 5 July on whether to approve a package of austerity measures demanded by the troika, while defending his latest proposal. His aim is to strengthen his negotiating position in the talks with the euro zone finance ministers on June 30 when the €1.6bn (£1.1bn) payment to the IMF falls due. Tsipras political future is at risk. The troika has said that will not be extending Greece’s financial rescue package after its midnight deadline.

For the mobilisation of the workers against both the imperialist offensive and the austerity package proposed by the Tsipras government.

The EU president, conservative Jean-Claude Juncker, Angela Merkel and IMF officials alongside New Democracy and PASOK, have led a reactionary international campaign calling to vote ‘YES’ on Sunday’s referendum. They have declared a “war of fear” on Greece and are trying to influence the outcome by “terrorising” the Greek people, warning of the consequences of a Grexit and of the subsequent devaluation and inflation. A ‘Yes’ vote will mean a new defeat, it will represent the acceptance of the troika’s demands, a ‘humiliation’ of the country and even deeper austerity.

Prime Minister Alexis Tsipras called for the Greek people to vote ‘no’ in Sunday’s referendum while seeking to continue negotiations. He has been clear that he would accept a “moderate austerity plan”. For that reason, many think that the referendum is a trap to legitimise the government’s plan and strengthen its hand in negotiations with the EU.

While Tsipras will try to use the referendum to negotiate with the European leaders in order to implement austerity measures in return for debt relief, the workers, youth and poor masses will use the referendum to repudiate the troika austerity measures and to express their anger at being forced to pay for the rescue of the capitalists and the bankers.

The rejection of the troika’s terms will be expressed in different ways, either by voting ‘No’ or by viewing the referendum as a fraud. The key action to defeat the troika is to organise the wide popular feeling against the imperialist demands and to transform it into a mobilisation of the Greek workers and masses.

The Greek government speculates that the troika will eventually make some concessions, as the Greek exit from the euro would trigger a crisis in the Eurozone and risk European unity. However if this plan does not work there is a sector that pushes for a "Plan B" – the reinstatement of the drachma. Another possibility is a default without a “Grexit”, one which imposes capital controls and establishes a currency in parity with the euro.

Deeper austerity measures in order to pay a suffocating debt and save the eurozone are untenable for the Greek workers and masses. Equally dangerous is leaving the Eurozone without taking the basic defense measures against future attacks – the resulting devaluation of the Greek currency and inflation following exit would likely have catastrophic consequences for the Greek workers and masses.

Argentina imposed the “corralito” in 2001-2002, freezing bank accounts and ending the parity of the peso with the dollar. The move caused a harsh devaluation at the expense of salaried workers. In Greece the consequences could be even worse because there is no other currency in circulation. Furthermore the economic conditions which made the Argentinian recovery possible are not the same and will not provide the bases for a recovery.

It is necessary to break with the troika and to undertake emergency measures. Such a plan should start by cancelling the Greek debt, reversing all the privatisations and abolishing indirect taxes on the population. A steeper progressive tax system should be levied on the rich and big businesses while sacked workers should be reinstated to their previous jobs. Greece needs a real end to austerity.

In the face of massive capital flight which has intensified over the last few weeks and the bank holiday imposed by Tsipras – which affects mostly small savings (and not big capital and the Greek bourgeoisie) – a defensive policy is needed to protect workers and the Greek masses. These policies should include nationalisation under workers´ control of the banking system and all foreign trade. They must include the expropriation of all corporate assets (from foreign and Greek companies) like the powerful shipping companies. Workers’ control must be imposed on all major companies and industries. This should be the program to force the capitalists to pay for the crisis and to fight for a workers’ government. Against capitalist Europe, and against far-right demagogy and its reactionary nationalist program, we stand for the unity of the working class throughout the continent; for the United Socialist States of Europe.

The Greek people can’t win this fight alone, widespread international solidarity is needed. European trade unions in many countries need to stop their collaboration with imperialist parties and governments and call instead for mobilisations to support the Greek people. European left parties like Podemos, which take part in government coalitions in cities like Madrid and Barcelona, should call for massive demonstrations on the streets to show support to the Greek people; they should demand the cancellation of the debt to their own imperialist countries.

We don’t support Syriza’s government and we warn that its campaign for the "No" vote is aimed towards improving its position in the negotiations with a plan of keeping the concessions already made during these last five months.

Our solidarity goes to the Greek workers and the Greek people, who are again on the streets against this latest blackmail and who have shown a great willingness to fight. They have led more than 30 general strikes and work stoppages against the Troika’s austerity plans and the capitalist governments like Pasok-New Democracy.