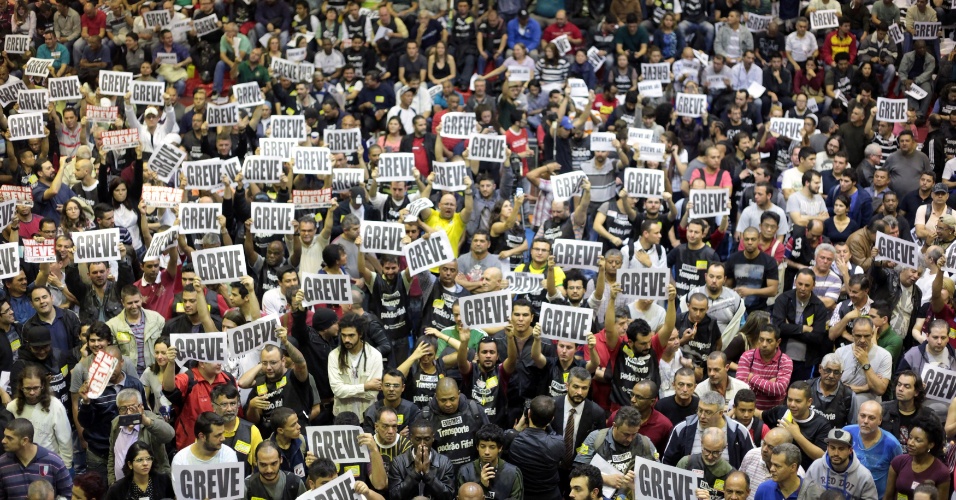 Four days until the World Cup, everyone unite for the victory of the subway workers! June 8, 2014

On the fourth day of the historic subway workers strike in Sao Paulo, which stopped the economic capital of the country for four days before the opening of the World Cup, the Regional Labor Court (TRT) dismissed the strike as illegal. Showing once again its service to the ruling class, the judiciary openly denied the democratic right to strike by claiming that the subway should keep 100% of its services running during peak hours. Endorsing the intransigence of Governor Alckimin, the labor court accepted only the 8.7% salary increase initially proposed by the government, and refuses to discuss all the other demands of the strikers. Aiming to break the growing willingness of struggle which has been observed in increasingly large sectors of the working class after the victory of the sanitation workers’ strike in Rio de Janeiro, the TRT decided the workers would lose two days pays for the strike, and the union would face a stiff fine. They seek to impose, through exemplary punishment of the subway workers, a loss to the whole working class.

But the subway workers responded decisively. In a meeting with 3,000 workers, a large majority approved the continuation of the strike and the strengthening of the picket lines. In unison, the workers agitated with the battle song that was sung by the Rio sanitation workers that spread across the country as an expression of toughness, “We won’t back down!” Still, the state government followed up with the threat of a mass firing of the strikers to pressure them to return to work.

The striking subway workers are an advanced expression of the combativeness that has spread through the working class as seen by workers in several sectors deciding to defend their demands and challenge the alleged “legality” that serves only employers and government. For this, they rely on their determination to fight and make alliance with the population that suffers from expensive, yet poor quality public services while loads of money is allocated to World Cup stadiums to maximize profits for FIFA and its capitalist partners. Despite the so-called “contingency plan” through which the company works to break the strike using the bosses and personnel from management-in-training, the impact of the work stoppage is huge–not only for economic loss to local capitalists, but primarily for the risks to the World Cup.

On the second day of the strike (Friday, June 6th), police repressed the picket line at Ana Rosa Station, which for several hours prevented the operation of the contingency plan, bringing the strike to another level, and making news in the international press. The brutality of the government was demonstrated by bombs and rubber bullets unleashed on the subway workers who sought to defend their right to strike and to report the huge risks the company was subjecting the population to operating with improperly trained scabs. Not long after the government militarized the entire city in response to the bus drivers’ strike, dozens of police moved to the outer areas of central metro stations soon after the Ana Rosa station picket line began, with police carrying machine guns positioning themselves inside the stations.

With the military patrolling the streets to ensure “law and order” during the World Cup, and with the silence and intransigence against Alckimin’s threats to discounting strike days from the workers’ pay, the Dilma’s PT government becomes complicit in the repression of the workers that was authorized by Sao Paulo state’s Toucan (PSDB) government.

Working with the independents in the grouping Metroviários pela Base, we, the militants of LER-QI, are proud to be at the forefront of the struggle to get this strong strike going. We are the base of the organization that developed a new activism that was the basis for the combative picket lines. We prepare the workers to confront the labor courts, calling for unification of all ongoing struggles, such as the USP workers’ strike, in a national strike, and by building of an alliance with the community by defending the reduction of user fees and by nationalizing transportation under workers’ control, and also defending the opening of the turnstiles. Now, we are defending with all our energy: strengthen the strike and picket lines. With the unity of this sector of workers that have heavy social weight, and with the support of workers and youth, we can win!

The union centers, such as CUT, Força Sindical, and the CTB, should declare support for the struggle at the subway worker’s general assembly on Friday and call for a national work stoppage that strengthens this fight and unites it with the other struggles throughout the country. To the extent they do not take these actions, the union centers will demonstrate their submission to the Alckimin and Dilma governments, and their complicity with the attempt to impose a defeat on the subway workers.

All unions, political organizations, student and popular entities led by the left must strengthen and broaden the active solidarity for the struggle of the São Paulo subway workers solidarity by mobilizing for solidarity actions and road blocks throughout the country.