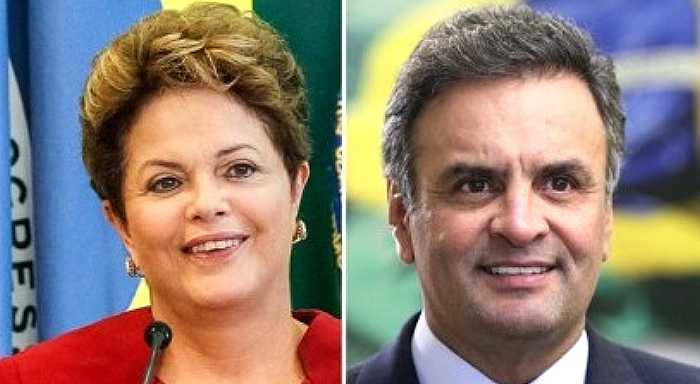 Dilma Rousseff, the PT candidate for reelection, wins the first round with 41.6% of the votes, the lowest vote in the first round since 1989. Aécio Neves, who until a few days ago was not considered a serious contender in pre-election polls, was the main winner with 33.6%, surpassing the candidate Marina Silva of the PSB, which was defeated with only 21.3%, eliminating the “third way” against PT-PSDB polarization.

Dilma Rousseff wins first round, but with unprecedented difficulty

The PT candidate goes to the second round with 5.3% less than was achieved in the first round of 2010 (46.9%). This was the lowest vote for the party since 1989, when then-candidate Fernando Collor went to the second round with 28.5% against Lula. Aécio Neves’ strong electoral recovery mainly in Minas Gerais and São Paulo, and the migration of Marina Silva voters to the PSDB candidate, explain the “turn” in the final stretch of the first round.

In some states, such as São Paulo and the Federal District, as well as in the big cities, the anti-PT vote increased. Aécio Neves and Dilma Rousseff each won in 11 capitals. However, the PSDB candidate defeated the PT in important urban, economic and electoral centers such as São Paulo, Rio de Janeiro, Brasilia, Curitiba and Belo Horizonte.

The outlook for the second round indicates greater difficulties for Dilma Rousseff, who should get 41%, strengthening where she won (Northeast, North, Minas Gerais, Rio de Janeiro, Rio Grande do Sul) and struggling for votes in the Midwest. She will still have to win over voters who voted for Marina and Luciana Genro, as well as those who abstained.

President Dilma will count on the strength of the PMDB and other parties in the current government whose base in several states, capitals and cities, rely on social programs and the advantage of having resources at hand to exchange for support, the famous political patronage.

Aécio Neves, who will have little to take from Dilma in the Northeast and North, will need to gain many votes in Minas Gerais and other states, as well as winning in São Paulo because it cannot not rely solely on the prediction of absorbing the majority of the Marina Silva voters.

The second round will be a battle for every vote, with many unknowns and a high dose of unpredictability. Flaws in the campaign, slips and constant corruption scandals can be decisive to define winner and loser.

Marina loses, but remains as a relevant “political factor”

Marina Silva, after emerging as an “overwhelming phenomenon,” ended the elections achieving only 2% more votes than in 2010. The fall was the product of the PT’s deconstruction campaign, pointing out programmatic inconsistencies, her vacillations to the right on issues such as homophobia and abortion, relationships with bankers and neoliberal economists and her inability to “explain” her “new politics” project. Aécio Neves hammered on her historical ties with the PT and the Lula government to win back the anti-PT social base. In the end, Marina Silva did not consolidate a "third way" or fulfill the desire to end the polarization between the PT and PSDB.

The PSB was the party that grew the most in the elections, increasing their federal delegates from 24 to 34 and from 4 to 7 senators, in addition to electing their candidate to governor in Pernambuco in the first round and remaining a player for four more seats in the second round.

The PSOL (Party for Socialism and Freedom) despite doubling its votes from 2010, with a total of 1.6 million votes and increasing its representation in parliament from three to five federal delegates and from six to 13 state delegates (candidate Luciana Genro won 1.55% of all votes) has not become an alternative for the millions who have awakened since the crisis of June 2013. Neither has it become an alternatve for the workers who led the largest waves of strikes since the 1990s.

With the exception of Rio de Janeiro and Rio Grande do Norte, where the PSOL candidates for governor won almost 9% of the votes, the party achieved only mimimal results throughout the country, failing to surpass 2% elsewhere.

Since June 2013 the PSOL has continued to strengthen its significant parliamentary representation and has been able to mobilize voters behind the fight for democratic rights such as LGBT rights and the legalization of drugs. But at the same time, it has recruited as a candidate Cabo Daciolo, a military firefighter who led a mutiny. With this the PSOL has reproduced the old tactics of the PT in the state of Amapá and has formed a coalition in a gubernatorial election with the PSB party of Marina Silva.

Even after massive demonstrations which rocked the nation in 2013 and the largest wave of strikes since the 1980s, the Unified Socialist Party of the Workers (PSTU) and the Workers’ Cause Party (PCO) achieved the same electoral result as they did in the previous elections. This makes clear their inability to build themselves as political alternative among broader sectors of the working class and the youth.

The PSTU was never a party that acheieved significant electoral victories, especially in the highest profile races and in the latest elections, its electoral result was miniscule. In 2010, it won .08% of the votes, in the most recent it reached .09% of votes (90,000 total votes) for the presidency. Its parliamentary candidates, despite years at the heads of important unions such as the metal workers, professors, construction workers, and subway workers, acheived insignificant results.

Toninho Ferreira, former president of the metalworkers union of San Jose do Campos who recently led the movement for housing in Pinheirinho, was candidate for federal delegate in San Paolo and won 22,000 votes. The leader of the construction workers union from Belem, Cleber Rabelo, was elected councilmember in 2012 with almost 4,600 votes but recently as candidate for federal delegate achieved only 7,700 votes.

The second round and the lack of a left alternative

The historic and unprecendented level of back-and-forth in these elections is representative of the lack of a real political alternative that can respond to the demands of the June protests.

The meteoric rise of Marina Silva after the death of Eduardo Campos is credit to her discourse of “new politics”, which sought to rise above the polarization between the PT and PSDB. For a moment it was able to attract a “useful vote” from the PSDB supporters that saw her as having greater chances of removing the PT from power. Her fall began when it was clear that her so-called “new politics” were a farse. The PT voters she captured returned to Dilma and in the final days of the campaign, the traditionnally PSDB electorate returned to its favored party.

This back-and-forth of the electorate, whether against the PT or against the PSDB is the latent expresion of the crisis of representation which began in the country during June of last year and points toward increased crises for the regime.

The lack of a left alternative to respond to the growing discontent with the PT government and the erosion of this party has allowed the PSDB to rebuild, maintaining the old polarization between the parties.

Asked about the election results and the position of the left toward the runoff vote , Diana Assunção, leader within the Sao Paolo University Workers Union (SINTUSP) and the League for Revolutionalry Strategy (LER-QI), stated: “Independent of who wins, whether Dilma or Aecio, they are preparing to unload the burden of the coming economic crisis on the backs of the workers.

The anti-PT vote in favor of Aécio Neves will mean the return of the agents of privatization, cuts in social spending, worsening condidtions and price hikes for services like education, health, transportation, energy, water, in addition to salary cuts, layoffs, and the end of labor rights. The “useful vote” for Dilma as a lesser evil against the PSDB is not an alternative. It will legitimize the lack of attention to the demands of June and the measures against the workers and the people that will be implemented in the upcoming term if the PT wins the elections.”

She added “Given the lack of an alternative, we call upon the workers and the youth to vote null in the runoff elections. At the same time, we call for an open debate on the construction of a new revolutionary party for the working class, based on the lessions of the experience with the PT and the failure of the current left parties. A party that would unite the most representative sectors of the strikes that shook the country this year and the youth that took to the streets in June.”