Great Britain will strengthen its military presence in the Falkland Islands 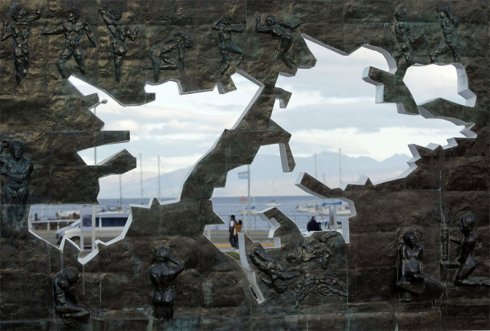 The Argentinian government has repudiated the "warmongering and saber rattling attitude" and will appeal to the UN Decolonization Committee, but without going into any of the multiple and multimillion dollar deals of the English transnational corporations.

A few days after the interventionist Executive Order (decree) of United States President Barack Obama against Venezuela, in which the South American country was being stigmatized as being a "threat to the national interest" and to which he applied new economic sanctions, the British government stated that Argentina continues to be "a very lively threat" and announced an increase of the budget and the military presence in the Falklands.

The famous British sensationalist daily paper The Sun that published a report from the Defense Ministry where it is considered that "a growing risk of invasion" by Argentina exists, divulged the news. For his part, Conservative Prime Minister David Cameron stated that he "is determined to defend the rights of the islanders who want to go on being British."

The excuse would be based on the moves that Argentina would supposedly be making for the purchase of 2 ships and 18 military aircraft from Russia. However, as analysts point out, the reality is that the Argentinian Armed Forces do not have any ability to attack, much less invade, the islands.

The exact cause of these aggressive statements is the fact that the Conservatives want to take up a stance as defenders of the "national interest" facing the elections that will take place in May of this year and not lose votes in facing the ultra-rightist and xenophobic UKIP. And what the increase of the militarization of the islands more deeply expresses is the confirmation of the colonialist policy of British imperialism over these Argentinian territories taken over by force in 1832 and then artificially populated.

A "nationalist and popular" government

Cristina Fernández’ government, through the Chancellor, Héctor Timerman and other top officials, condemned the false accusations and confirmed the "peaceful demand" for Argentinian sovereignty over the Falklands.

But the rule of the Kirchners is far from any anti-imperialist demand or behavior, and even from the defense of "national sovereignty." On the contrary, it has its own electoral objectives and is using the colonialist extreme verbosity (after the sending of only two helicopters was confirmed) of the British Conservatives to try to renew the myth of a "national and popular" government with the defense of an historic demand of the Argentinian people.

The truth is that, since 2003, the governments of the Kirchners have not taken a single serious measure against the imperialist pillaging in the country, nor against the English transnational corporations, nor against those of other imperialist powers. The HSBC, Nobleza Piccardo, Unilever, Shell, the mining company La AlumBrera and so many others enjoy the collaboration of the government, that guarantees their million-dollar deals, not to mention tens of thousands of hectares of Patagonia, that were sold to English multimillionaires.

From the left, we affirm once again the need to promote the struggle against imperialist oppression.