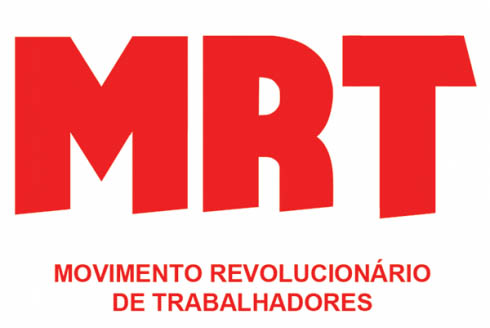 The MRT has emerged from the League of Revolutionary Strategy - Fourth International (LER-QI), who in an extraordinary session of their 5th Conference voted to change their name. The Conference was presided over by the director of the Union of University of Sao Paulo workers (Sintusp), Pablito Santos. The debate began with opening statements by Diana Assunção and Marcelo Tupinambá and among the participants was Val Lisboa, a leading member and founder of LER-QI.

The conference also had an honorary table set to commemorate Leon Trotsky, the fighters of the IV International and the Greek people struggling against austerity. The conference began by paying respect to the teachers strike, the country´s biggest workers´ struggle right now, and to comrade Gaëtan, a French militant threatened with prison for participating in protests in France.

The change in name and the formation of a new organization expresses a decisive change: the strengthening of our organization by a new layer of workers. Workers from the University of Sao Paolo, the Sao Paulo metro, striking teachers, postal workers, bank clerks, factory workers and other sectors as well as other regions who have taken an active part in LER-QI discussions. The new composition demands a new organization which corresponds to the objectives and needs of a new era.

The change is also related to the huge advance that the organization is able to provide workers with the release of Esquerda Diario in Brazil, a Latin America-wide tool for news and ideas that began in Argentina and has spread to other Latin American countries. Esquerda Diario has the goal of forging a base to develop a real alternative politics. In Brazil this means developing a real left alternative in the face of the crisis of the PT. In countries like Argentina it means advancing the left against the crisis of Kirchnernismo. Esquerda Diario is a strong instrument for shaping public opinion which has already reached thousands which we aim to have reach over a million in the next few months.

The goal is to create a party which aims for socialist revolution, something which seemed distant in past decades but which has once more gained strength due to the capitalist crisis that began in 2008. In Brazil, the massive mobilizations in June of 2013 which brought the masses to the streets and in a few weeks changed the political history of the country show the potential of this new period.

A new stage in the struggle of workers and young people was opened, one which has generated the biggest wave of workers strikes in the past few decades. Already we can see signs which demonstrate the strength of the real subject of social transformation: the working class.

However, the struggles of this new period demonstrate an important limitation for workers in their fight for social revolution: the need to create a political instrument - a revolutionary party which is deeply embedded in the working class and has the ability to take on the ruling class, defend the oppressed and advance the socialist revolution.

We believe that this party must be based in a genuine interaction between revolutionary ideas and the working masses. Some parties of the international left have grown in their influence, like Syriza in Greece and Podemos in Spain, through a media focused strategy (from above) but without having a genuine base among workers (from below). These parties are not up to the task of advancing the revolution and instead offer a future of illusions and new defeats for workers.

An international alternative which provides an example of the type of revolutionary party that we need has arisen in Argentina. There the Socialist Workers Party (PTS) has acted effectively in the workers movement and in the class struggle. They are part of the Left and Workers Front (FIT), a block of organizations that support socialist revolution and offer a real alternative politics to workers.

Our movement aims to unite workers and young people to advance the struggle in the face of the crisis of capitalism. Our goal is to build a revolutionary workers´party as a class based and revolutionary solution to the crisis of leadership in the workers´ movement. This crisis has been confirmed by the moves of the currently governing Workers Party to be closer to the capitalists. The forces to the left of the PT, despite many years of working within in the unions (as PSTU did) and in the parliament (as did PSOL), have failed to build a real revolutionary alternative to the governing Workers Party and the reformists.

That is why we consider that the new moment for the Brazilian working class to take up the challenge of organizing a united action with all of the class struggle sectors against the current attacks by the government. They will be the base for the programatic and strategic debate needed in order to build a new, internationalist, revolutionary workers party that starts from the lessons of workers´ experience with the PT in Brazil.

At the end of the conference, Esqurda Diaro interviewed Marcelo Pablito Santos, leader of Sintusp (Sao Paulo University Workers Union) who commented that “this new organization has the challenge to fight so that the tradition of self-organization that exists among the workers at the Univesity of Sao Paulo expands to other sectors and develops as a new tradition in the workers´ movement throughout the country.”

Francielton Bananeira, a union delegate from the Sao Paulo Metro affirmed “the need to extend the struggle for a union movement which goes beyond corporate/craft unionism throughout the country. A movement like what we do today in the metro, which links the economic demands of this strategic sector with the struggle for the nationalization of transportation under the control of workers and users as a way to respond to what was initially the main demand of the protests of 2013. ´´

At the end, Val Lisboa, a long time militant worker who participated in the foundation of the PT, said that “the MRT should work to build a party which takes seriously the lessons of what was the experience with the PT, something neither PSOL nor PSTU were able to do. They have demonstrated their inability to politically express the wave of workers struggles that has shaken the country in the last few years.”