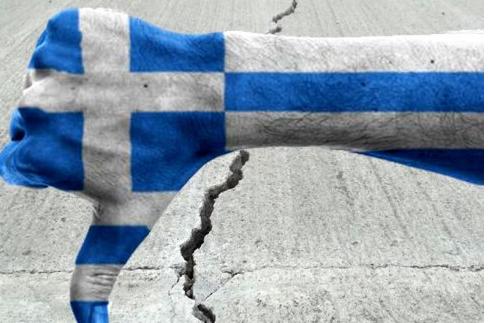 Greece is a supreme example of the accumulated effects of the world economic crisis. As the editorial writer of the Financial Times, Martin Wolf, indicates, unemployment has reached 26%, and the GDP is also 26% below its peak before the crisis of 2008. The expenditure of Greek society on goods and services has shrunk by at least an accumulated 40%. According to Paul Krugman, the "domestic devaluation" that took place in the Hellenic country, as a result of the fall in wages, and therefore, of the unit labor costs, reaches 16%.

Greece, in the first place, is, together with Spain, one of the countries of Europe that has most severely suffered the destruction of productive forces on its terrain. It is among the main victims of the "austerity" policies promoted and fundamentally defended by Germany. It is not by chance that Syriza – in which large groups of the wearied masses put their hopes – won the Greek elections, nor is the growth of the intention to vote for Podemos in the Spanish State, facing the collapse of the PSOE and the Partido Popular, accidental.

In Europe and especially in the Eurozone, deflationary trends have been put into place, that, according a recent analysis of The Economist, could be making way for a lost decade even worse than that of Japan in the 1990’s. The recent QE (a plan of quantitative easing), approved by the European Central Bank, with German opposition, represents an attempt to counteract this scenario. The effect of the monetary stimulus plans is well-known. In the best of cases, they are capable of restraining an acute, precipitous economic fall, and they can – under certain conditions, encourage weak recoveries. They are, however, powerless to induce powerful growth and reverse the critical structural conditions that impede more or less vigorous cycles of increased accumulation of capital. The destruction of productive forces, on the contrary, as neoclassical orthodoxy has historically affirmed, – with an aura of bourgeois honesty and little political skill, is the essence of a system that, in order to revive, needs to destroy what has been built – "creative destruction," Schumpeter called it. – The problem, clearly, is that this "wonder" of consistent creation, principally in the formation of big industrial reserve armies and suffering masses, ends up producing – in the best of cases for capital – "Greeces" and perhaps "Spains."

Whether the combination of QE in the Eurozone and the destruction – essentially in the countries of southern Europe – will be capable, together with the renewed policies of monetary stimulus in Japan and a possible delaying of the increase of interest rates in the United States and in Great Britain, of generating some type of interim recovery in Europe – an unanswered question suggested in The tendencies of the crisis under debate – remains to be seen. Here a more profound reflection is of interest. The friendliness of France, Italy, and Spain for the United States is well-known. Now the "Super Mario" – as they say of the President of the BCE, Mario Draghi – had promised, in the conference of Central Banks, at Jackson Hole, – on the other side of the Atlantic, and before the accommodating look of his colleagues from the United States – a possible monetary plan, in the American style, if it were needed.

The QE that Germany opposed, although, probably from fear of the consequences of not implementing it, it let pass, seems to be a point that the United States is noting down in its influence on the area. The economic difficulties for the dollar that follow from the resulting devaluation of the euro, could be less than the risk of an open deflation in Europe. But the attempt at US interference appears to be being played twice. The nearly obvious campaign of the Anglo-Saxon media, The Economist, Financial Times, The New York Times, The Washington Post, putting pressure on Germany from the "left" and on Tsipras from the right, seems a big playing card.

The particularly unified editorial talk, including columnists like Martin Wolf, is attracting attention. As Josefina Martínez and Diego Lotito say well here, the policy of release from debt, combined with structural reforms, has been promoted for a while from the very heart of the United States. However, this time, it would appear to be a case of a stronger bet, to make Germany submit politically. In the first place, by wielding Tsipras like a type of "human bomb," forcing him at the same time to turn still more to the right (a matter that for now seems quite simple), placing Greece as a sword of Damocles, that hangs over the future of the Eurozone and that of the European Union, if Germany does not yield (which, certainly, does not cease to be part of reality). They are hoping that if pressure on Germany had an effect, Tsipras, in the words of the British weekly The Economist, "will throw his crazy socialism into the garbage and will accept the structural reforms in exchange for debt forgiveness." It should be remembered that Tsipras’ "crazy socialism" consists, also in the words of The Economist, in "his plans to rehire 12,000 public-sector workers, give up privatization and introduce a big increase in the minimum wage."

This "delirious madness," facing unemployment in Greece similar to that to which in the 1930’s, the US government responded with the New Deal, would have as a result, still in the words of The Economist, "undoing achievements made by Greece in the area of competitiveness" ... And this allows one to suspect a bigger bet of the United States and the Anglo-Saxon arch, on Greece. If they stop disciplining Tsipras and forcing Germany to submit, an understanding of QE with the destruction of productive forces prevailing there would be achieved; Greece could – by virtue of the extraordinary increase of the profit obtained in terms relative to other countries – begin a cycle of economic recovery, that would certainly be based on the domestic devaluation that Krugman is talking about.

This "takeoff of the Greek economy" that the Anglo-Saxon arch (Head Office of neoliberalism) seems to be pursuing, is, in reality, a takeoff of the capitalist profits. That takeoff would logically be based on labor costs slashed by 16% and much more than that, since their market price is subject to an army of unemployed people equivalent to 26% of the Greek population. In addition, foreign capitals will be able to take advantage of the privatizations in a completely devalued Greece. A booming business. Now, of course, the key is to take advantage of the profits obtained from "competitiveness" that are not achieved so easily. It is also worth mentioning that The Economist considers that it is necessary to treat Greece like an African country in bankruptcy.

Beginning with its alliance with the nationalist party of the xenophobic right wing, "Independent Greeks," and the appointment of the main leader of that party in the Ministry of Defense, Syriza has sent multiple messages. Among them, that, to implement a program increasingly washed in continual devaluation, it has no intention – restating something that was already quite clear – of relying on the mobilization of the workers’ movement and of the masses. The latter is a limit to its ascription to the European Union, as is also explained here. The first aspect strengthens the Anglo-Saxon front’s illusions of converting Syriza into its own tool, seeking to transform Greece into an example of the possible recomposition of the coexistence between "democracy" and the "markets."

The second aspect that opens the question about a possible turn of Greece towards Russia and how far it could go, is, for now, just that, a question. What is certain is that the United States and Great Britain are using it as another instrument of pressure on Germany, the alliance of which with Russia has been hit hard, beginning with the annexation of the Crimea and the continuation of the conflict over the future of the Ukraine. Still, nothing is said. The use of Greece as a setting for resolving inter-imperialist relationships of force could add even more fuel to the fire of a critical situation. The forces of the workers and the groups of the poor and oppressed of Greece, are complete. In the coming period, they will have their experience with this new government, as part of a process that has recently begun.