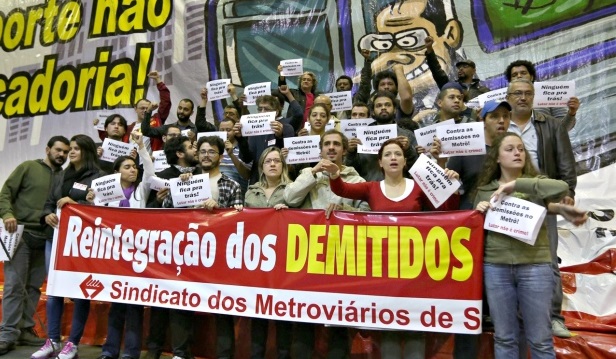 After the end of the five-day strike of the São Paulo subway workers, from La Verdad Obrera we interviewed Marília Rocha, an activist of the great strike and a militant of the LER-QI (a fraternal group of the PTS) and one the 42 workers laid off by the company with support from the Governor of São Paulo, Geraldo Alckmin.

This strike was one of the biggest in the history of the subway. The biggest conflict had lasted six days, at the end of the 1980’s, and the current strike lasted for five days.

Although the workers not only confronted the company, but the government of Geraldo Alckmin, of the Social Democratic Party (PSDB) and a big campaign from the media, to turn the population against the strike, the strike remained strong from the beginning to the end.

At a key moment of the strike, we proposed setting up a strong picket line in the Ana Rosa station, a station that is important for the functioning of the subway and that connects lines, that were repressed by Alckmin’s police, and that, during the final day of the strike, ended up with the arrest of dozens of activists, with 13 that were delayed in police stations for several hours.

In that context, the strike was very strong, showing the workers’ big capacity for struggle in a difficult situation, with a lot of repression, a few days before the World Cup.

What was the impact of the layoffs?

The government got tough and began to send telegrams of termination to the workers to intimidate them. The company hoped that the court would declare the strike illegal, to create a precedent for the layoffs. On Sunday, June 8, while the court was declaring the strike illegal, in the midst of declarations against the workers’ right to struggle, the company and the government used the opportunity to announce the layoffs with a clear character of a political persecution.

Altogether, there were 42 workers laid off. The impact among the workers, and the union’s vacillations, led to the strike ending last Monday, and it will not be resumed. There are many leaders of the union among those laid off, with attacks especially at tendencies like the PSTU and the Revolutionary Strategy League – Fourth International (that is promoting the group Subway workers from the rank and file), this last with 7 male and female comrades dismissed.

In the face of the national importance that the strike had, the layoffs are an attempt of Geraldo Alckmin to attack the subway workers, to make an example against the mobilizations and strikes, trying to demoralize the vanguard of this group, that was at the front of the strike and of all the workers in struggle in Brazil.

What was the policy of the Workers Party (PT) and of Dilma during the conflict?

President Dilma Rousseff had a policy against the mobilizations in general, a reactionary policy to keep the conditions of a "Peaceful World Cup" intact, going so far as to say in her final national statement, "Long live peace," in a clear allusion to the crisis created by the strikes and the demonstrations.

Thus, during the conflict, the PT had a line of trying to exert pressure to end the conflict in any way. Lula himself, with the aim of engaging in demagogy and removing the possibility of a second strike for the reinstatement of those laid off, on the opening day of the World Cup, went so far as to state that he thought they should be rehired. Dilma’s PT and Alckmin’s PSDB united to defeat the strike completely and prevent the subway workers’ mobilizations during the World Cup.

How is the campaign against the layoffs imposed by Governor Alckmin going?

Governor Alckmin is isolated in these completely authoritarian measures, creating contrary stances of different groups of society, even of groups tied to the PSDB and to the PT.

We have received support from different groups of workers in Brazil, from young people and also international groups. Here the workers of the University of São Paulo have been an example of solidarity, having different initiatives and going so far as to block streets for the rehiring of those laid off.

Internationally, the comrades from France, through an initiative of the Revolutionary Communist Tendency, especially the railway workers in struggle, have had a series of solidarity demonstrations. And also from other countries, as from Spain and from Mexico, where the comrades of the Fracción Trotskista (FT) have promoted solidarity actions; in Argentina, the PTS had a prominent role, subway and government workers, factory workers and other groups of workers were sending pictures of support through the social networks, and support from the Deputies of the PTS in the Front of the Left, Christian Castillo and Nicolás del Caño.

All that support has been very important, and we hope to intensify the democratic campaign for reinstatement, together with actions, like that of Thursday, June 12, in which we hope forcefully to wage the struggle for reinstating those laid off, during the opening of the World Cup. As we were saying in the assemblies, "No one remains in the street."

It is necessary that the union federations and the organizations of the left (PSTU, PSOL, Conlutas and the Intersindical) make every effort in the service of promoting a strong democratic campaign for the rehiring of those laid off.

This Wednesday, June 11, in the evening, an assembly was held, in which the majority leadership of the union (PSTU) voted not to continue the strike and to carry out a big campaign for the rehiring of those laid off. At this time, our comrades from the group Subway workers from the rank and file, together with the activists, are making an assessment of how to continue the struggle for the reinstatement of those laid off, and tomorrow, on the website of the FT, we will publish a first evaluation of this strike and the lessons that we should draw, in order to continue going forward.