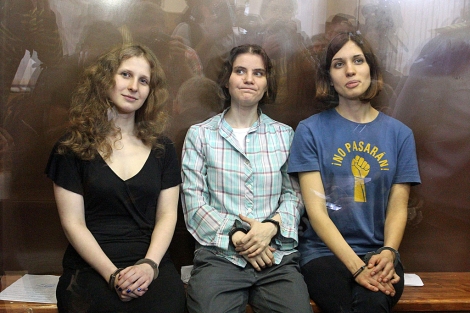 On February 21, this year, the Russian feminist punk band Pussy Riot carried out an action repudiating the Orthodox Church and recently re-elected President Vladimir Putin. The feminist activists entered Moscow’s main cathedral, and, in a completely peaceful action, they conducted a “punk prayer” where they asked the Virgin Mary to protect Russia from Putin. The feminist activists are 3 women: Nadezhda Tolokonnikova, 22, Marina Alyokhina, 24, and Yekaterina Samutsevitch, 30.

This action was carried out after the presidential elections in which Putin was declared the winner, despite charges of fraud and growing repudiation among the population, especially among young people. The government had already been toughening up repressive measures and reducing democratic freedoms, with the aim of obstructing the expression of groups opposing the regime.

The charge against the feminist activists seeks to teach a lesson, not only against the groups that are opposed to the regime, but against those who dare to question the institution of the Russian Orthodox Church, that has offered the regime and Putin enormous support.

The aim of the protest action was to point out the enormous weight that the religious institution has in the regime. Many people are also pointing at the relationship of the head of the Church, Vladimir Mikhailovich Gundyayev, called “Patriarch Kirill,” according to the ecclesiastical hierarchy, with President Putin, whom Kirill calls a “miracle from God.”

Moreover, Gundyayev has been criticized several times because of his ostentatious lifestyle, something the Church itself tried to conceal when they photographed him using a $40,000 watch. The Church has been backing Putin with the aim of having him defend its interests. During his term of office, Putin has returned to the Orthodox Church a large part of the properties that had been expropriated from it by the October 1917 Revolution. And, if there were any doubt about the artificial nature of the separation between Church and State, Gundyayev himself stated in an interview in Poland that the Church and the State in Russia are separated, but they pursue the same moral interests. On August 17, the sentence against the 3 women for “vandalism motivated by religious hatred,” became known, with 2 years in prison for having sung a song inside a church and, according to the female judge, carrying out “diabolical dances.” To this, the public prosecutors added that the activists “hurt the feelings of the Russian believers.”

It is clear that the harsh sentence against the activists has nothing to do with an alleged religious insult or a lack of respect for the “faith of the people,” as the public prosecutors and the government tried to justify. It is an attempt to discipline all the people and organizations that question the regime and its institutions. That is what the regime was seeking in trying the activists locked up in glass cages and handcuffed, as if they were dangerous criminals.

This reactionary measure seeks to strengthen, with a heavy hand, the disputed legitimacy of the regime, that, with this, only intensifies its policy of reducing democratic freedoms. In this case, to safeguard a reactionary institution like the Church, but with the prospect of armor-plating its regime against protests that, although they are still intermittent and diverse, do not appear to be diminishing.

Outside the court, hundreds of activists broke out in anger, when they learned of the sentence, and the demonstration ended with several arrests of activists and important figures who had come to the trial in solidarity with Pussy Riot.

The repudiation of the imprisonment had already gone around the whole world, adding the support of political and human rights organizations, and important figures from the world of music, who made formal requests that the young women be released.

The same day that they passed sentence on Pussy Riot, the Supreme Court decision to reject the appeal that a lawyer defending the rights of the LGTB community of Russia had presented, against the previous sentence of a Moscow court, that prohibited the holding of the Gay Pride march in the city for the next 100 years, became known. The Russian legal system confirmed the city’s ruling and, in that way, led a new assault against those who are demanding greater freedom of expression and demonstration.

The fight for the release of the Pussy Riot singers has been taken in hand by many organizations, not only of feminists, because the repudiation of the toughening up of Putin’s regime and its repressive offensive against the groups that are opposed to his government, is expressed in the struggle for their release.

It is clear that all the statements of indignation from Obama and the European Union are only a sign of shameless cynicism. They themselves limit the democratic freedoms of the population, by supporting the reactionary “War on Terror” laws in the United States, and, in Europe, by blatantly persecuting the millions of female and male immigrants that live and work in their countries. No statement nor denunciation in the international organizations will weaken Vladimir Putin’s repressive regime and its reactionary institutions; working women and men will only do that with their mobilization of women and young people.