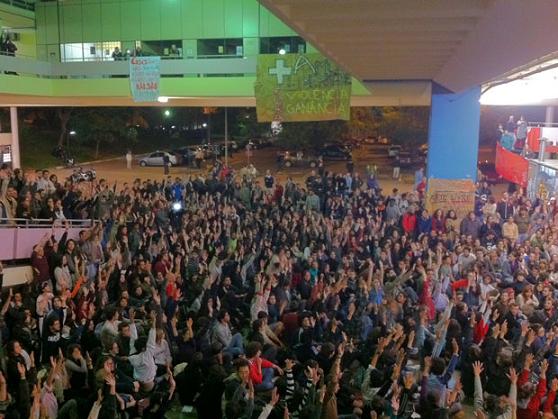 The Rector’s Office of the USP, in the figure of the "persona non grata" Joao Grandino Rodas, proved that the recent tribute to the "Revolution of 1964," was not a mere deception. It used its regulations and authoritarianism, remaining from the times of the military dictatorship, to impose free access for the military police to the University City, against the educational community. The same police that are known for being among the most murderous in the world, for repressing and killing the poor and black population of the peripheries and hills, now has carte blanche from the academic bureaucracy to repress, classify, humiliate, besiege, and seize the students daily. The innumerable cases that had been related were responded to by the students on October 27, by not allowing the police to classify and take as prisoners three students who were allegedly smoking marijuana in the Philosophy Department. Initially, 100 students made a cordon, surrounding the students and the motorcycles of the police, demanding that they release their documents.... The academic bureaucracy and the student bureaucracy of the Students’ Center (PSOL) tried to convince the students to surrender, in order to exchange the criminal record for an internal investigation.... The Students’ Center had the absurd position of escorting the students, carrying out the role of the police. The students expelled the police by force from the corridors and destroyed the police car that would take away the student prisoners....There was an assembly with more than 500 students, where the immediate occupation of the Philosophy Department was approved, for Military Police, out! Immediate abolition of the agreement that permits Military Police to enter the USP! Against persecution and repression of those who struggle! ...

Police repression at the service of the "University of Excellence"

Rodas has been accelerating the project of the university, that seeks to transform the USP into a university of excellence based on outsourcing work and making it precarious, and on the most marked conversion yet [of the USP] into an elite institution.... The militarization of the USP is completely associated with the Rector’s Office’s offensive of repression against the militants of the SINTUSP (Union of non-teaching workers) and against the students. It is the autocratic power structure in the University that makes viable the entrance of the police into the USP. Fighting for Military Police Out! also means fighting for the demolition of that power structure.... It is necessary to win a truly democratic power structure. Rodas, out! For an Enacting Assembly of the whole USP, where each student, Professor and official gets one vote!

POLICE OUT! FOR THE REPEAL OF THE AGREEMENT BETWEEN THE RECTOR’S OFFICE AND THE MILITARY POLICE!

RODAS, OUT! SANDRA NITRINI, OUT!

DISSOLUTION OF THE SUPERIOR COUNCIL! FOR A FREE AND SOVEREIGN ENACTING ASSEMBLY OF THE ENTIRE USP! FOR THE RADICAL DEMOCRATIZATION OF THE UNIVERSITY!

FOR A STATE-WIDE MEETING OF THE SAO PAULO UNIVERSITIES IN STRUGGLE!