Chile: Free education is won with struggle, strikes, occupations and without bureaucracy

By Fabián Puelma, Law student at the University of Chile and student leader of the PTR 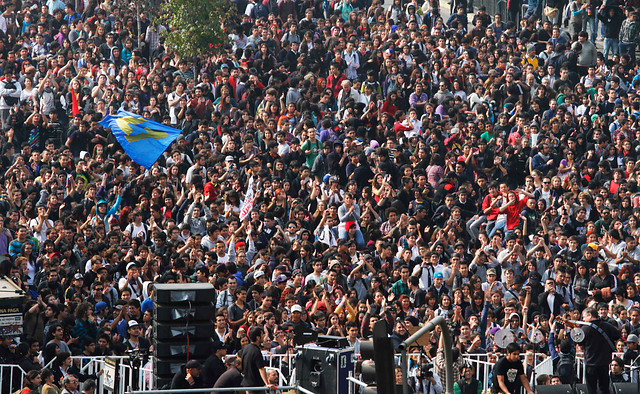 More than 100,000 students mobilized nationally on April 25. Only a few days after the announcement by Piñera’s government of some reforms that do not aim at the central demand of the movement, which is free education, the student movement again filled the streets. These marches throughout Chile recalled last year’s massive mobilizations. Columns from the different public and private departments of the country, of technical and liberal arts secondary students. Banners and signs against the government, the Concertación, and the legacy from Pinochet. Calls to take up the struggle for free education again, rejection of the government’s measures.

Against all predictions, the massive character, strength and conviction of the students in struggle was on display. It is clear that we are not worn out. We know that this is not only a student struggle, but that the mobilization of Aysén shows that we must aim at putting an end to the heritage of Pinochet’s rule, by uniting with the workers and the people. One feels a willingness to continue mobilized. This is our new starting point.

The government wants to retake the initiative to deactivate possible mobilizations

The national political agenda of these weeks was marked by two central events: the announcement by the Education Minister rejecting the banks of university credits, and the announcement of a tax reform, to finance the government’s educational measures. But these measures do not, in any way, resolve our demands. Indebtedness and the extremely high tariffs are being kept; it will be the state that finances private institutions that profit at the expense of our indebtedness. As for the tax reform, that alone is not enough, but it keeps the regressive tax structure, the benefits and exemptions for the big enterprises.

The government wants to retake the initiative, responding to the enormous disapproval it faces, to the questioning of Pinochet’s legacy and the possibility that new struggles will begin again. It wants to defuse the mobilizations. This is seen clearly in the fact that, at the same time it makes these announcements, it is promoting a repressive offensive against the best militants of 2011, with expulsions in the secondary schools, disciplinary actions in the universities and the criminalization of politics.

Free education is won with struggle, strikes, occupations and without bureaucracy

The massive character of the march took the leaders of the student movement (of organizations like the Autonomous Left, the collectives christened by the press as the “ultra” or the Communist Youth, among others) by surprise. Are they preparing to use this march as a starting point to take up the struggle again, with more force, to win free education? Not at all. In the meeting of the CONFECH (Confederation of Students of Chile) after the march, they limited themselves to repeating the same clichés that we have been hearing for months. If, at the same time, they reject the possibility of taking up indefinite strikes and new occupations again, the only strategy they are really putting into practice is parliamentary pressure behind the technical proposal of free education and tax reform that they drew up. Groups like the Autonomous Left are already pressing for establishing non-profit status as a priority, relegating the slogan of a free education to a principle, a goal, removing the whole capacity for struggle from the marches and transforming them into ordinary, traditional parades.

On the contrary, from the Revolutionary Workers’ Party (PTR), next to the comrades of the Militant and Revolutionary Group (ACR), we have been putting forward a very clear slogan: Free education is won with struggle, occupations, strikes and without bureaucracy. We believe that the April 25 mobilization must be turned into a first step for taking up again the struggle that was unresolved, with a clear strategy based on mobilization and on demanding free education as a minimum. In turn, we are fighting for this year’s CONFECH Congress to be turned into a massive and representative event of the student movement in struggle to put an end to bureaucracy, build an organization that will serve as a tool of struggle, to achieve a unification of the university and secondary students, from the grassroots. We are also promoting militant and active worker-student unity, that will aim at putting the political strength achieved by the student movement at the service of the struggles of the workers and the people.