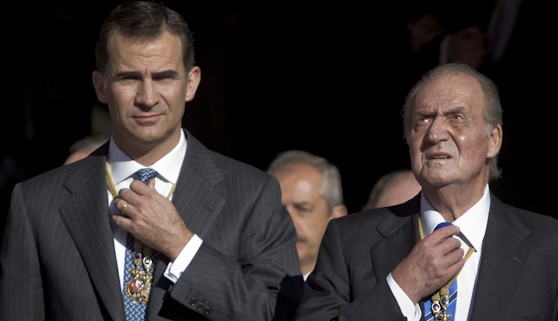 King Juan Carlos I has abdicated in favor of Prince Felipe. He is doing it in the context of severe exhaustion of the institution of the monarchy and the worst crisis of the Regime of ’78. Ever larger fissures are opening up, like the emergence of the Catalan question or the debacle of both parties that are supporting this regime, the PP and the PSOE, that last May 25 did not add up to half of the votes. This crisis is incited from below, by the growing anger of millions of workers, groups of the poor, and young people, that is expressed in hundreds of mobilizations and strikes.

The monarchy, the big parties of the regime and the big communications media are trying to use the succession to make some reform that will improve the image of this democracy for the rich. As in the transition, they want something to change, but what is essential to remain, and, therefore, the big democratic and social demands, that we millions have been fighting for in the streets, the companies, the schools, to be left without a solution...

Many political parties are demanding that a referendum be organized to define the form of the state. We support every means that will allow democratic expression on this matter. Whether by this way or another, the key to managing to put an end to the monarchy passes through developing the most powerful and massive social mobilization.

We call for participation in the mobilizations that are going to take place this afternoon in almost all the cities of the state. We call on all the forces of the parliamentary left, like PODEMOS or the IU, to put all their resources in favor of the development of the social mobilization. We must also demand of the leaderships of the CCOO and the UGT and the rest of the union organizations, that they call assemblies, strikes and actions in the companies, with the perspective of preparing a General Strike against the imposition of Felipe VI.

It is necessary to put an end, once and for all, to the reign of the Bourbons. And we are not going to able to achieve this in the institutional framework of the current regime. From Clase contra Clase, we consider that the opening of a revolutionary constituent process is necessary, a process that will be started by the struggle of the workers and the people, setting up institutions of self-organization, from which to impose the convening of a Revolutionary Constituent Assembly on the ruins of this regime, elected by universal suffrage of everyone above sixteen, natives or foreigners, in a single state constituency, that will guarantee that every vote has the same value.

An assembly of this type will be the only one entitled to discuss and decide on all the great democratic and social demands, as well as the end of the monarchy. We are part of the struggle against the Bourbon Monarchy from this perspective. We fight for a Republic, but not of bosses and bankers; rather a Republic of the Workers that will resolve the big democratic aspirations, give a solution to the big social dramas of unemployment, the evictions, poverty... and will allow the free self-determination of all the nationalities in a Federation of Iberian Socialist Republics.

Down with the Bourbons and the monarchy!! For the broadest mobilization against the imposition of a new king!! Down with the Regime of ’78!! For a Revolutionary Constituent Assembly! For a Federation of Workers Republics of the Iberian Peninsula!!