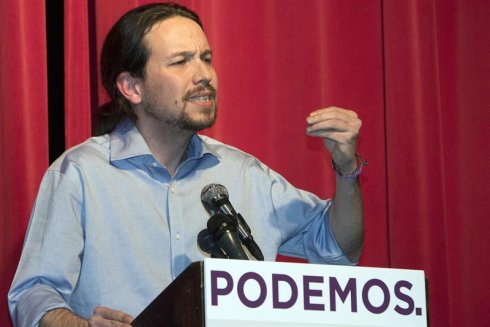 A political outsider takes center stage Outside of Syriza in Greece, there is perhaps no European political party in recent years that has experienced a rise in popularity quite as rapid as that of Podemos in Spain. Like Syriza, Podemos was born out of the widespread discontent with the social democratic, liberal, and conservative parties of the European establishment who have held power for decades and who have all embraced the policies of neoliberalism. However, also like Syriza, Podemos has not offered political solutions that would break from the capitalist status quo that has left millions in poverty and desperation across the continent.

Without a doubt, Podemos is the first party [1]. in recent history to mount a significant challenge to the two parties of the Spanish ruling class–the social democratic Spanish Socialist Workers Party (PSOE) and the conservative People’s Party (PP). According to an April 9th poll, Podemos would win the general elections if they were held today, with 22.1 percent of the vote, just ahead of the PSOE, which earned 21.9 percent support. In January, the party had its strongest show of strength yet, when more than 100,000 people filled Puerta del Sol square in Madrid, to show their support for Podemos and denounce the austerity programs carried out by the PP and PSOE. With December’s elections fast approaching, all eyes are on Podemos and its charismatic presidential candidate, Pablo Iglesias.

The origins of Podemos In the days and weeks following May 15, 2011, tens of thousands of young people occupied the plazas throughout Spain, demanding jobs and an end to austerity. The youth, who came to be known as the indignados (the indignant), captured the attention of the world and would later inspire the Occupy movement in the United States.

With an unemployment rate of nearly 25% in the country and austerity programs which brought massive cuts to health care, education, transportation, and other public services, the Spanish workers and oppressed classes lost faith in the ability of the PSOE to provide solutions to the crisis at hand. The fall from grace of both parties of the Spanish political establishment has been hastened too by multiple corruption scandals linked to both the PSOE and PP [2]. This was the context in which the Podemos (We can) party arose. Within a just few months of its founding, the party had won five seats in the European parliament.

The origins of Podemos differ from those of the social democratic and eurocommunist left of years past in that its roots are not in the trade unions. Instead, the party was launched by university professors and public intellectuals, among them the political science professor Pablo Iglesias, who had become a popular television personality. Podemos was also joined by the Izquierda Anticapitalista (Anticapitalist Left) party, a member of the United Secretariat of the Fourth International.

A Participatory Process? The founding manifesto of Podemos made connections to the indignados movement and declared the need for an "open, participatory process" of organization. Yet, despite its links to the youth movement, which had made decisions by assembly and stressed "horizontalism", the leadership of Podemos has increasingly adopted undemocratic and vertical methods of organization.

In November 2014, following the party’s "Citizens’ Assembly", Podemos carried out an online vote among its members on three documents which would determine the party’s policies, methods of organization, and "ethics". The voting system, which was organized by a "committee of experts" close to Iglesias, only allowed for vote en bloc, whereby a vote for one faction’s organizational document also meant a vote for their political and ethical documents as well. In this system, it was inevitable that all the documents of the Iglesias faction would win out. Furthermore, Iglesias, conscious of the power of his charismatic figure, threatened to resign from the leadership, if his documents were not voted upon. An important component of the faction’s ethical document was a prohibition on "dual militancy" which would prevent militants of other parties such as Izquierda Anticapitalista (IA) from holding positions of responsibility within Podemos. This restriction prevented Eurodeputy for Podemos, Teresa Rodríguez from holding a position of leadership within Podemos because of her militancy within IA.

Two weeks after the "election of documents", the party held internal elections for its leadership positions. Although the vote was technically not restricted to blocs, the online voting system, thanks to the committee of experts, was such that clicking on one list automatically selected all of the candidates of that slate. In the end, Iglesias was voted General Secretary and all 62 positions available went to the Iglesias faction.

The Economic Platform of Podemos While described by much of the international bourgeois press as the "far-left", Podemos, like Syriza in Greece, is in essence a new center left party, with a social democratic economic program, and a populist rhetoric, minus the historical links to the unions. In November 2014, the party presented its economic program entitled "An Economic Platform for the People". The program called for the reduction of the workweek to 35 hours, although whether workers will experience a decrease in wages as occurred in France in 2000 is still a question [3]. The program does not include any additional measures which would prevent such a decrease in wages. The platform also called for the creation of new jobs along the lines of a Rooseveltian New Deal and guaranteed "access to credit". It is notable also that Podemos scaled back nearly all of the already moderate demands that had propelled the party’s popularity during the European parliamentary elections. Podemos’ earlier demand for nonpayment of the international debt was replaced by a call for the "organized restructuring" of the debt and its demand for the minimum age of retirement to be reduced to 60 from 65 was also jettisoned.

The limits of an anti-austerity party The Podemos program contains various anti-austerity demands, but as a whole, it represents an adaptation to capitalism, rather than a fundamental challenge to it. This adaptation was taken even further recently by the party’s Political Secretary Iñigo Errejón. Asked whether, if upon taking office, Podemos would forgive the Greek debt to Spain, Errejón responded "No, we would like to recover that money."

The example of Syriza in Greece has demonstrated that an anti-austerity government, which does not challenge the institutions of capital, will be incapable not only of confronting capitalism but even austerity itself. We can expect that politics of Podemos become more and more moderate as they gain positions in the state structure. Riding the outrage of the indignados movement, the party has striven to divert the popular outrage through institutional channels and electoral politics. Behind a radical rhetoric and a charismatic leadership, the substance of Podemos’ political program is to try to "fix" capitalism, not to destroy it.

This article was based on the following previously published articles from La Izquierda Diario: