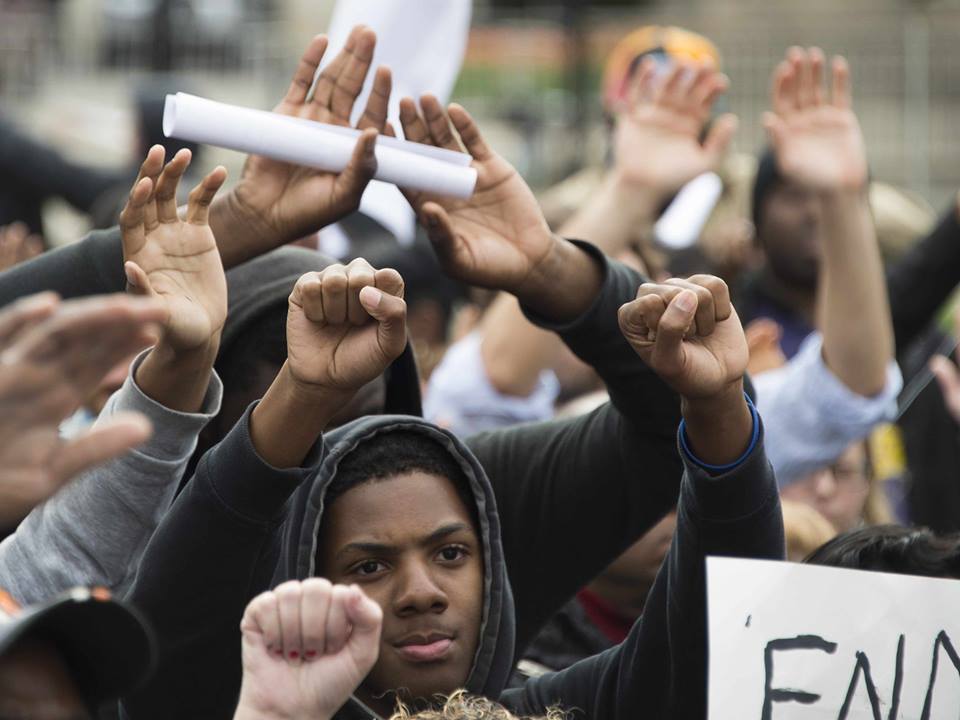 Everywhere the bourgeois pundits ask how it came to this. Reporters who maintained cold skepticism in the face of dead bodies gape in astonishment at the spectacle of a burning convenience store. The politicians preach non-violence as they send in an occupying army. All of them pose the same question; how can we restore the peace?

"Peace". Peace to them is Freddie Gray´s broken spine. Eric Garner choked out on the floor struggling to grasp for breath. Mike Brown shot dead. It´s the bullet that tore through 12 year old Tamir Rice´s torso and the handcuffs fastened on his 14 year old sister for daring to run towards her dying brother. The militant poor black youth of Baltimore have seen that the ´´Peace´´ of the ruling class offers nothing but a funeral shroud laid out at the end of a short life full of deprivation and poverty. Peace is death.

Why is Baltimore burning? Baltimore is burning because of the undeclared war waged against black america. A war that has devastated lives, torn families apart and left communities in ruins. A war waged with weapons ranging from bullets to bank loans. A war integrally linked to the relentless assault the ruling class has led against the working class over the past 40 years.

Freddie Gray´s neighborhood has an unemployment rate of over 50%, one third of houses are abandoned and 7.4% of children have lead poisoning. In a report by John Hopkins University, impoverished Baltimore youth reported conditions comparable to and sometimes worse than counterparts in Johannesburg (South Africa), Ibadan (Nigeria), New Delhi (India) and Shanghai (China).

Under America´s racist hierarchy black workers have always been the last hired and first fired, relegated to the hardest, dirtiest jobs in many of the sectors that were the most vulnerable to automation. The widespread devastation brought upon by the neoliberal turn and de-industrialization of vast stretches of America amounted to an economic war waged against black workers. Cities like Detroit, Cleveland and Baltimore — former bastions of working class radicalism and black power — were turned into empty ruins.

Hand in hand with this economic attack came a political program to destroy the black left. The state campaign of infiltration and murder waged against the Black Panthers and other leftist groups was essential to disarming poor black communities. The US government then laid the ground for the epidemic of drug dealing and gang violence. It was the CIA that helped kickstart the market for crack cocaine in the US, making deals with latin-american drug cartels to illegally finance reactionary death squads like the Contras in Central America.

The United States incarcerates more people, 2.2 million, than any country in the world. African Americans are 13.6% of the US population yet make up 40% of the prison population with more than 800,000 incarcerated in jails and prisons. At current incarceration rates 1 in 3 Black males will go to prison, compared to 1 in 6 latinos and 1 in 17 whites. African American men face a rate of imprisonment more than 6 times higher than black men under South African Apartheid.

Yet the American Carceral State reaches far beyond the walls of the prison. 4.75 Million US citizens are on Probation as of 2013 and 30% of those on Probation are black. Conditions of probation vary but overwhelming involve waiving constitutional rights around search and seizure, being subject to regular drug tests and expensive court fees.

Yet many like Freddie Gray don´t make it to the courthouse. In the seven years leading up to 2012, a black person was killed by police every 3-4 days, roughly equivalent to the rate of lynchings in the early 20th century. Police are 21 times more likely to kill young black males than whites

Prison, police lynchings and beatings, disenfranchisement, occupation. Death at the hands of the state or death through poverty. The combined effect of police murder, mass imprisonment and poverty related violence has been nothing less than a massacre.

A remarkable study published in the New York Times shows the depth of the crisis. Whereas most white communities have a relatively equal gender ratio of about 100 women to 99 men, for every 100 black women there are 83 black men. The rest, 1.5 million ´´missing´´ in total are the dead or imprisoned casualties of the relentless war on Black America. Baltimore ranked among the most impacted cities with over 19,000 ´´missing´´ men.

Why are the black youth of Baltimore revolting? Why are they risking beatings, prison and death to burn cars and buildings in protest? Because beatings, prison and death are already the only futures American capitalism has to offer them. Against the economic, political and social starvation of their communities, against the state-sponsored lynching, against the political structure which claims to represent them while maintaining oppression — they have chosen to resist.

Baltimore isn´t the first city to reclaim the riot as a political weapon and it wont be the last. The social and economic conditions which lay behind the revolt are there in every inner city slum and suburban ghetto across the United States. The rage behind it seethes in the black, latino and poor communities who have seen their families and lives destroyed by poverty, prisons and drugs. Riots alone won´t put an end to those conditions; but they clearly express the profound social discontent and the will to resist of a new generation.

The one-sided war which the ruling class calls peace is over. The struggle will continue.