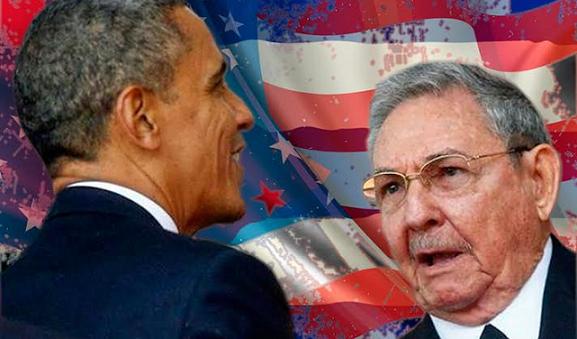 CUBA - US The United States resumes diplomatic relations with Cuba after 53 years December 18, 2014

In a speech to the nation, US President Barack Obama announced in person the end of the policy that Washington has maintained towards Cuba for the last 50 years, based on the attempt to destabilize the Castro regime by economic strangulation and diplomatic isolation, among other forms of harassment.

The reasons for this "new era" in bilateral relations

"Today I am announcing the end of a policy towards Cuba that is obsolete and has failed for decades… It is time to weigh anchor from the past because it is necessary to achieve a better future for our national interests, for the people who live in the United States and for the Cuban people," Obama said. At the same time, he announced that they would take Cuba off the list of countries "promoting terrorism," an obstacle from the Bush era that hinders any advance in political or economic relations and the opening of an Embassy on the island (up to now, there has only existed a [US] "Interests Office"). Just like that, it is a matter of a new strategic stance of the White House, that is trying to capitalize politically on the economic opening that Raúl Castro is promoting and not remain outside of the profitable business that it involves for many US companies.

The speech was greeted by the whole international press and by all the capitalist governments inside and outside of the Americas, and it coincided with a speech of his Cuban counterpart, who once more reaffirmed "our willingness to have a respectful dialogue with the United States government" and confirmed that "we have agreed on the re-establishment of diplomatic relations."

Hours before Obama’s historic announcement, the most significant act of the process of "relaxation" of relations that has already taken almost a year since Raúl Castro and his US counterpart shook hands during the funeral of the Black leader Nelson Mandela, had taken place: the Cuban government freed the American Alan Gross, who was held on the island for espionage for 5 years. The White House did the same with the three Cubans that remained imprisoned from the famous group of five, arrested in 1998. This took place together with other previous big gestures of détente, like inviting Cuba to the next Summit of the Americas to take place in April 2015, from which it was always excluded by order of the imperialist power.

As all the international press is reporting, we are seeing an historic turn in the bilateral relationship since, after the 1959 Revolution, the US broke diplomatic relations and imposed on the island one of the longest economic blockades in modern history. Except for a short period of relative distension during Carter’s administration (1977-1981), the relationship was always rough and full of threats and sanctions, with years of special confrontation, as in the 1960’s and 1970’s when Cuba was one of the main settings of the Cold War, or during the 1990’s when the US passed the Helms-Burton law, that criminally reinforced the economic blockade in the middle of the collapse of the local economy after the fall of the Soviet bloc.

The interests of Obama and Castro

Since Barack Obama, who in his election campaign had promised to resume the relationship with Cuba, took office in 2009, significant changes had not taken place, beyond revising some of the most confrontational measures from the Bush era, like easing the blockade of medicines and foodstuffs or making the requirements for trips and sending money to the island, flexible. On the contrary, the Democratic administration has continued demanding "real changes" both on the economic plane (market reforms) and in politics ("democratization" of the regime).

Why now, after more than fifty years, are diplomatic relations being resumed (and economic relations in perspective)? The reasons for the "new era" that is beginning, correspond to very concrete interests of both parties. Obama, in the final stretch of his term and having again put the country, against all his promises, in the war in the Middle East, wants to recover the political initiative and political leadership. In actions, he is even accepting the strategy of Castro’s bureaucracy, consisting of a "Chinese road" of capitalist restoration, by keeping the one-party regime and management of the state by the governing bureaucracy. At the same time, he is giving way to the growing pressures from different business groups that have in hand big deals to make on the Island, especially as regards exporting food, but also of direct investments in the most diverse areas. He also strongly played the fact that the formerly decisive "anti-Cuban lobby" based in Miami is now very weakened. According to surveys, more than 50% of the Cuban community of that city is against keeping the blockade.

For his part, Raúl Castro has for years been promoting a series of structural reforms in the economy, oriented to attracting foreign capitals, ridding the state of the largest part of the businesses and fundamental economic resources (with the exception only of health care, education and security), by laying off more than one million workers and strongly reducing social expenditure, as the increase, by five years, of the retirement age or the drastic reduction of the Ration Book, expresses.

This wager, to get out of economic stagnation, based on squeezing the workers and promoting self-employed labor, that has tripled in scarcely two years, hardly served to avoid the collapse. The policy of promoting foreign investment by giving big opportunities and benefits to companies and transnational corporations, the biggest milestone of which is the recently approved Foreign Investments Law and the mega-project of modernizing the El Mariel port, has not yet given the results hoped for. The investments are being kept at a low level, despite the enormous political support that the capitalist governments of the whole world have given the reforms, that have included the cancellation of a big part of Cuba’s foreign debt.

To make matters worse, Cuba’s biggest economic partner, Venezuela, that since 2002 has been financing 50% of the island’s oil consumption and has hired tens of thousands of Cuban doctors and teachers, is going through a profound economic crisis, because of the steep decline of oil prices in the most recent months. This puts that essential aid, without which the Cuban economy would collapse, at serious risk. Although it has not materialized yet, the risk is real, and, in fact, Maduro’s government, in need of foreign currency, recently got rid of the foreign debt of the Dominican Republic, one of the partners of Petrocaribe, the Caribbean alliance that Chávez founded in 2005, and of which, Cuba is a key part. These "storm clouds" that do not promise to subside, are what is urging Castro to get new partners and investments.

For that reason, in his speech, he insisted that the US lift the blockade and even responded to the excuses that Obama is using to keep it centered on the fact that it needs congressional approval.

An agreement to complete the capitalist restoration

The historic accord between the governments of both countries is being greeted from the big communications media and capitalist politicians of the whole world. We demand the immediate and unconditional lifting of the criminal imperialist blockade against Cuba, and we demand Cuba’s right to negotiate in a sovereign manner. But what everyone is concealing, beginning with Castro’s bureaucracy, that seeks to be recycled as a new capitalist class, is that this agreement, drafted and blessed by the Catholic Church, is the gateway to the consummation of the capitalist restoration, that Raúl’s government has been preparing "without haste, but without a pause," with the explicit backing of Fidel from his political retirement.

They are deliberately hiding the disastrous consequences that the massive entrance of imperialist capital will have for the great working majority. Beyond the fact that it could produce a brief and relative improvement of the living conditions in some groups, the capitals will go to plunder the country and to exploit the qualified (and, measured in dollars, very inexpensive) local workforce. They are hiding the fact that the big bureaucrats in the government, that run the main enterprises of the country and control foreign trade, are associated with transnational capital. Those same capitals that, throughout Latin America, have systematically plunged our peoples into poverty, looted our natural resources and pillaged with unpayable and fraudulent foreign debts.

Nothing progressive will come from the capitalists, from Castro’s bureaucracy, or from the Catholic Church, for the heroic Cuban people that led the first socialist revolution of the Continent and withstood, for decades, the worst conditions, a result of the imperialist harassment and the bureaucratic planning of Castro’s leadership.

Cuba can only benefit from a new revolution that will throw out the bureaucracy and install a real government of the workers and the people.