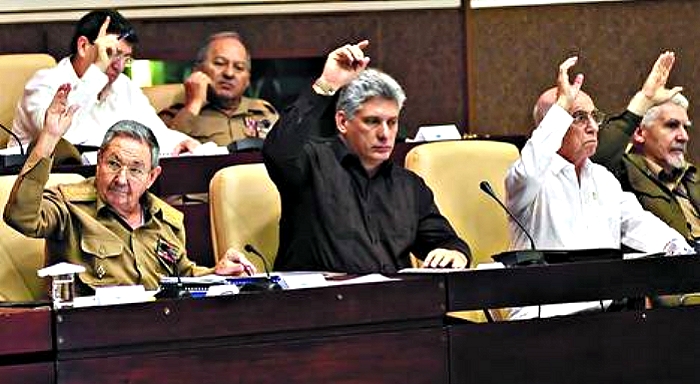 Cuba: The National Assembly has approved the new Law on Foreign Investments

They are moving forward in restoring capitalism

With talk about "keeping" the country’s economy "going," defending "national sovereignty," that "we will never return to the past," and that the economic system of "socialist Cuba" will continue to be based on "ownership by all the people," Castro’s bureaucracy has taken a serious step forward on the road of restoring capitalism. At the "proposal" of the Council of State (the highest government body), the National Assembly (a parliament to which only citizens endorsed by the Cuban Communist Party [PCC] and the institutions "of the masses" that it controls, can be nominated) unanimously approved the new Law on Foreign Investments that replaces that passed in 1995, during the so-called "Special Period."

Unlike other laws that they passed by broad "debates" in tens of thousands of "assemblies" (like the recently approved Labor Code or the Guidelines for Economic and Social Policy, approved in 2010), the preliminary text was not published, much less discussed in any other agency than those mentioned. It is about a real "matter of State," a key part for the bureaucracy’s plan of "bringing the economic model up to date," of which, only now, having been approved, its details are beginning to be known. It constitutes the clearest attempt in the most recent decades to move forward in capitalist restoration under the auspices of the PCC.

Joining together with foreign capital

The new law has the stated aim of attracting direct investment of foreign capitals, it is speculated, of between 2 billion and 2.5 billion dollars annually. For this purpose, it expands and deepens the concessions that the previous 1995 law made, by giving big benefits and guarantees to capital. Taxes on profits are reduced from 30% to 15%, and a deferral of several years is offered to begin paying them. The tax on hiring the workforce, that was 20% of wages, is being eliminated. The inviolability of the investing firms’ ownership is guaranteed, except in case of a national emergency and previous payment of the corresponding compensation. The areas open to foreign investment are increased from tourism, mining and oil, to the entire national economy, excluding only healthcare, education and defense. Free export and import without the state’s intervention is guaranteed, definitively breaking control over foreign trade.

As we said, the complete text of the law is not yet known, and it will be necessary to see how it is regulated and how it will really be applied, but everything indicates that, unlike the form that spread during the 1990’s of mixed enterprises (51% state property), the establishment of 100% foreign capital enterprises (which already figured in the 1995 text, but was never applied), will also be permitted. It is particularly expected that there will be strong investments in Cuban agriculture, where Brazil already has big business ventures undergoing expansion, like soybeans, dairy products, poultry farming and other food categories where Cuba has extremely low productivity, despite the reforms it has applied, and it must import 80% of the foods it consumes.

A key part of the plan and a sign of what is to come, is the new deep water port of Mariel, 50 kilometers from Havana, that involved an investment of 850 million dollars, financed mainly by Brazil (75% through the BNDES and the rest contributed by the Cuban state). This port, with a exceptional location in the Caribbean, at the entrance to the Gulf of Mexico and near the Panama Canal (that is under an expansion plan), will be the capital of a broad free trade area, managed 100% by the Singapore Port Authority monopoly. The model tries to copy the case of China, that in the 1970’s opened up areas of this type and expanded them in the 1990’s, and they were the basis of the capitalist restoration in the Asian giant. In short, Mariel aims at becoming a big commercial and industrial center, free of taxes for the foreign capitals that will be able to take advantage of the low-cost and trained Cuban workforce.

Another key point that the new law introduces is the possibility for "individuals and legal entities" to participate in the foreign investments, that is, Cuban firms or banks, whether residing on Cuban soil or not. That opens the gates for businessmen from the powerful "Cuban exiles," mainly in Miami, that in the last year have been strengthening their ties with the Island after the reform of the Cuban Migration Law approved in January, 2013, to invest.