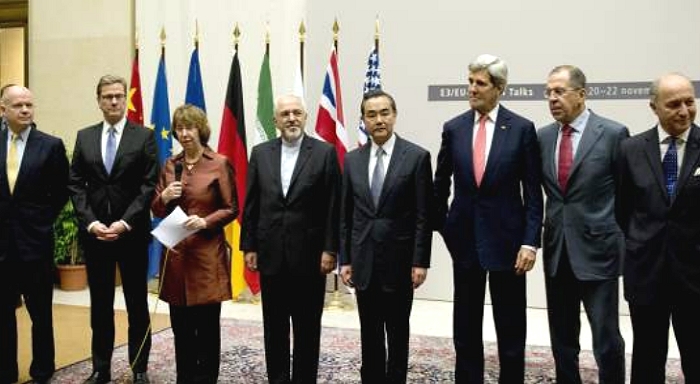 In the early hours of November 24, the agreement between Iran and the so-called "P5 + 1" group (the five permanent members of the United Nations Security Council, the United States, Great Britain, France, China and Russia, plus Germany) was announced in Geneva. According to the terms of this agreement, that was being secretly negotiated for months under the leadership of the US government, Iran agreed to freeze its nuclear program of enriching uranium to 20% (for military use) for 6 months, in exchange for which, the Western powers are partially suspending some of the economic sanctions, by an amount that scarcely reaches 7 billion dollars; this relief also allows a limited expansion of the operating capacity of the automobile industry, one of the country’s main employers. This is something even less if one takes into account the fact that these sanctions have reduced oil production by half and have frozen around 80 billion US dollars that Iran has deposited in the international banking system, although it has a big symbolic value for the regime that is already beginning to seek foreign investments. This interim agreement will be supervised by United Nations inspections. Once the 6 months of the agreement’s validity are over, the negotiations to establish a final agreement about the Iranian nuclear program will begin.

The vast majority of the Western media welcomed the agreement, even comparing it to the agreement between Nixon and Mao Tse Tung in 1972, that aligned China with the United States, against the Soviet Union. Many people are encouraging expectations about far-reaching geopolitical changes, beginning with a "normalization" of the relations between the United States and Iran, broken off since the 1979 revolution, which would facilitate, for example, the US withdrawal from Afghanistan, or arriving at a negotiated solution of the civil war in Syria. However, although the agreement could be an advance in that sense, it will hardly end the profound regional contradictions that are being fostered by the US defeat in Iraq and Afghanistan and by the outbreak of the "Arab Spring."

Although the final outcome is uncertain, on a first reading, the text of the agreement is sufficiently ambiguous for both the United States and its Western allies and Iran to claim a victory.

The big losers of this first diplomatic round are the State of Israel and Saudi Arabia, that had been pressing for the Obama administration to toughen up the policy towards Iran, which included military actions, not merely to halt the nuclear advance but, above all, to limit the expansion of Iranian influence in the Middle East. For Israel’s security, it is very important that Iran not gain access to nuclear weapons. For Saudi Arabia, the projection of Iran’s regional power could encourage the Shiite minorities, as in Bahrain or on its own territory in the Eastern Province, where the oil industry is concentrated.

The Israeli Prime Minister, B. Netanyahu, explicitly rejected the agreement and described it as a "historic mistake," while the Saudi monarchy was more cautious. However, beyond the signs of dissatisfaction, neither Israel nor the House of Saud can get by without the strategic alliance with the United States.

Obama is trying to present the negotiation as a victory of his diplomatic policy, based fundamentally on the pressure of the economic sanctions and an ever less credible military threat. The regime of the ayatollahs, under the new President Hassan Rouhani, agreed to negotiate and to make concessions, something that seemed highly unlikely with M. Ahmadinejad. Iran will be subjected to a strict regime of supervision by the UN, that will monitor fulfillment of the commitments assumed. At worst, if a final agreement is not reached, say the officials of the Democratic administration and the "realist" tendency of US foreign policy, time will have been gained, delaying the possibility that Iran will develop nuclear weapons. In addition, US firms will be able to enter the lucrative business of Iranian oil. For this reason, the majority of the US bourgeoisie supports the agreement, although the Zionist lobby will certainly manage to express its opposition in Congress.

The Iranian regime can claim not to have handed over its sovereignty to the "Great Satan" in a humiliating agreement. Ultimately, and despite having worsened the regime of sanctions, the concessions made are even less than those offered in the most recent, unsuccessful negotiation of 2005, and the agreement implicitly recognizes the "right to enrich uranium." Over and above J. Kerry’s statements, the text really sets out that "a comprehensive solution will involve a program of enrichment, mutually defined and with mutually agreed upon criteria." The Iranian government claims that the measures are reversible, since in this first stage, the dismantling of any nuclear reactor is not being demanded. In exchange, Iran gets to ease the sanctions that are ruining its economy, which suggests an uncontrollable social setting for an exhausted regime, with strong social opposition.

Over and above the diplomatic gestures and their symbolic value, the agreement is a result, rather, of the weakness, than of the strength, of the parties involved.

From the point of view of the United States, it is an explicit acknowledgement by the Obama administration of the inability to impose its policy by force. The disastrous and burdensome results of the wars and military occupations in Iraq and Afghanistan, as part of the war against terrorism, have made military interventions highly unpopular among the US population. The Obama administration, even though it escalated the war in Afghanistan, to try to avoid a defeat, sought to withdraw military power on the rest of the fronts opened by Bush, and pursue its objectives through methods, like the attacks with drones (pilotless aircraft) that reduce the risk of US casualties. This also corresponds to a strategic turn in foreign policy of concentrating US efforts on the region of Pacific Asia, in order to contain China’s advance.

This turn led the United States to take a discrete role in NATO’s intervention in Libya, although keeping political and military leadership. And, more recently, it led Obama to back down from launching a military attack against the Syrian regime of Bashar al Assad, as a punitive measure for the alleged use of chemical weapons against the civilian population. Facing certain defeat in the US Congress, as had already happened to his ally, British Prime Minister Cameron, the US President ended up accepting the "Russian solution" of controlling the destruction of the chemical weapons by Assad, in order to get out of the predicament.

From Iran’s point of view, the situation is also contradictory. As a result of the overthrow of Saddam Hussein by the United States and the rise of the Shiite majority to the center of power in Iraq, Iran has strengthened its own position as a regional power, based on a system of alliances that include, in addition to the Iraqi government, the Syrian regime, the Lebanese militia Hezbollah (strengthened after having defeated the Zionist army in the 2006 Lebanon War) and Hamas in the Palestinian territories. This relative geopolitical strength, in addition to the fact that it is about one of main countries of the region, with 75 million inhabitants, discouraged the offensive military action of the United States, already involved in two wars. However, the flip side of this new situation is the economic crisis and an insurmountable social rupture between the conservative regime of the ayatollahs and the middle classes and groups of workers, that was expressed in the massive democratic mobilizations of 2009.

Under a harsh international regime of economic sanctions, that are also affecting businesses that violate the embargo (in this, it is similar to the embargo that the United States maintains against Cuba), Iranian oil production has been noticeably reduced. According to the International Energy Agency, in only one year, Iran’s oil exports fell from more than 2 million barrels a day to only 1.1 million. The economy has contracted by 6%, inflation has gone up to 40%, and unemployment, to 20%. Former President Ahmadinejad tried to prevent this time bomb from exploding, by keeping a subsidy scheme cost of prices of popular consumer goods, with energy in the first place.

However, enormous dissatisfaction was expressed in the election of Hassan Rouhani, who appeared as a "reformist" alternative to Ahmadinejad, who had not only lost popular support but also support from the clerical establishment and the Revolutionary Guards, where the real state power resides.

The agreement has the support both of the Iranian bourgeoisie and of the different wings into which the regime is fragmented; the regime seems to have closed ranks in order to survive. The current President, Rouhani, a protégé of the group of clerics represented by Rafsanjani, more related to a opening-up towards the United States, also has the blessing of the Supreme Leader of the Islamic Republic, Ayatollah Khamenei, who has publicly congratulated him for having achieved an agreement that "legitimizes the Iranian nation’s nuclear program on the international stage."

Reaching an agreement with the "Great Satan"?

In his speech for his 100 days in power, the Iranian President not only blamed the Western sanctions for the "unprecedented stagflation," in which the country finds itself. He announced the need for a restructuring of the economy, towards the free market, and a "reform" in the system of subsidies, that aims at eliminating the subsidized prices of fuels, services and foods.

Historically, the theocratic regime has used imperialist hostility and its own opposition to the United States and Israel to keep a reactionary national unity and to persecute and massacre those who, defending the democratic slogans of the 1979 revolution, have opposed the establishment of a theocratic state. This turn would seem to indicate that now the regime is seeking to strengthen itself by turning towards the West and being accepted by the "international community." This explains the fact that it has euphemistically offered its services to settle conflicts, alluding to its "stabilizing" role in Afghanistan. If the regime really consolidates this "pro-Western" turn, the next wave of popular dissatisfaction will find it stripped of one of its main domestic weapons of legitimization: its alleged anti-imperialist glories.