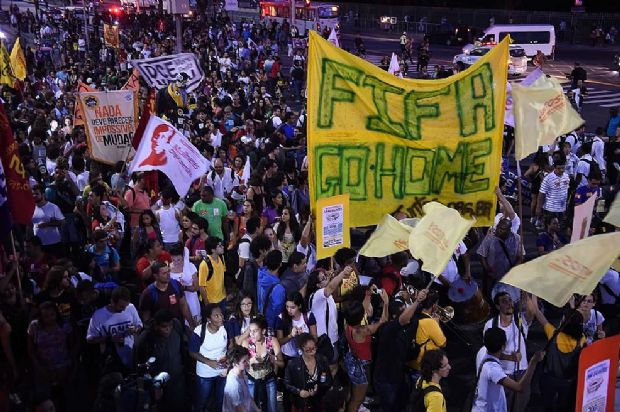 A month before the beginning of the World Cup, publicity on television is trying to show the "Brazil of soccer," and the government is making an effort to sell the image of a World Cup that is good for the people. However, what no one can conceal is the fact that while billions were spent to prepare the mega event, the majority of the population continues to be affected by the floods, deficiencies in the health services, education and transportation, the lack of housing and the loss of purchasing power because of the growing inflation. On the other hand, to prevent this dissatisfaction from being expressed, the government is setting up a brutal militarization of society with police, army and navy contingents in the streets.

A strike wave is going through the country

In recent weeks, several strikes gained prominence on the national political scene. The city teachers of São Paulo are carrying out a strike that has already lasted almost a month, in which they are demanding that the minimum wage be raised to 3,000 reales. The bus drivers of Rio de Janeiro are showing their strength with partial strikes combined with picket lines of hundreds of workers, demanding raises of 40% of wages. The workers of the University of São Paulo, in an assembly of more than two thousand workers, approved launching a strike to begin on May 27, with the possibility of its being expanded into a united struggle of all the universities of the state. Several groups of public workers are already on strike or are threatening to go on strike in the coming weeks, among them, all the federal workers and those of the São Paulo subway.

The strike of the São Paulo bus drivers puts on the national political plane not only the working class’ growing willingness to struggle, but also the exhaustion of the union leaderships and the radicalized methods of the workers’ struggle. Now is the time for the bus conductors and bus drivers of São Paulo to surpass the leaders of their union, by putting into practice a new method of struggle that consists in going out with the buses from the garages to block them and stop traffic in the main stations and on the main avenues of the country’s biggest metropolis.

After the victory of the garís (street sweepers), who got a 37% wage raise, in addition to other benefits, and with other strikes underway, it seems too little to any worker to "struggle" for 1 or 2 percent above the official inflation rate, as they had been doing in recent years.

We must curb the attacks in industry

In the automotive industry, management, that has been getting record profits in recent years, is taking advantage of the reduction in sales to blackmail the workers, by seeking to reduce production costs. In almost all the auto plants, suspensions and mass vacations have begun.

Dilma’s "progressive" government is putting together a law that institutionalizes layoffs, allowing the employers to pay half the wages during that period, getting still more aid from public funds. Thus, the Workers Party [Partido dos Trabalhadores] (PT) government, taking in its own hands the historical project of labor reform of the Brazilian Social Democratic Party [Partido da Social Democracia Brasileira] (PSDB) seeks to extend and generalize, at a federal level, this type of attack on working conditions and wages that previously was restricted to five months and could be implemented in some factories. A brutal attack that we must confront!

At the Mercedes Benz plant of São Bernardo do Campo, where the workers are threatened with thousands of layoffs, and they are being forced to adhere to the plan of "voluntary" layoffs, partial strikes of production were carried out, showing a willingness to struggle, in order to resist these attacks.

On May 15, a national day of protest was carried out. Since it took place in the context of the strike wave that is covering the country, the convergence of the demonstrations of the young people’s vanguard, workers’ actions and protests of the social movements, like the homeless that blocked the main avenues and roads in key cities, like São Paulo and Brasilia, was possible. In this way, May 15 had the unprecedented column of 1,500 subway maintenance workers, who stopped working and marched through the streets of the city center; the columns of metalworkers led by Força Sindical, that marched through the south-eastern area, and the massive march of teachers, who again stopped the traffic of the country’s main city.

Since September 7, last year, we have not seen a national day of protest like May 15. Despite the fact that the media and the government made an effort to belittle the protests as "weak" and representing minorities, they did not succeed in concealing their fear that the alliance among the young people in the streets, the workers’ strikes and the social movements in struggle will become established, not only by resuming last year’s massive demonstrations, but with a greater centrality of the working class. A fear that is enhanced by the crisis in the finishing of the stadiums, in the endless infrastructure works, in the scarcity of water, and in the explosions of urban violence in the cities that are venues of the events.

In this context, the union federations opposed to the government, like CSP-Conlutas (led by the PSTU) and the Intersindical (led by the PSOL) should demand that the CUT, CTB and Força Sindical call a national strike to unify the struggles underway and take up again the demands of the mobilizations that began in June, last year. A strike organized in rank and file assemblies, with picket lines and marches of hundreds and thousands of workers, raising their own demands, independently of the union bureaucracy, the employers and the governments.

In the coming national days of protest, those unions need to amplify this call throughout the country, by bringing their own rank and file workers to a standstill, as a strong demonstration that it is possible to surpass the collective mobilizations of each sector by unifying them on shared demands.