"In Argentina, the anti-capitalist and socialist left is beginning to take shape as a real alternative" 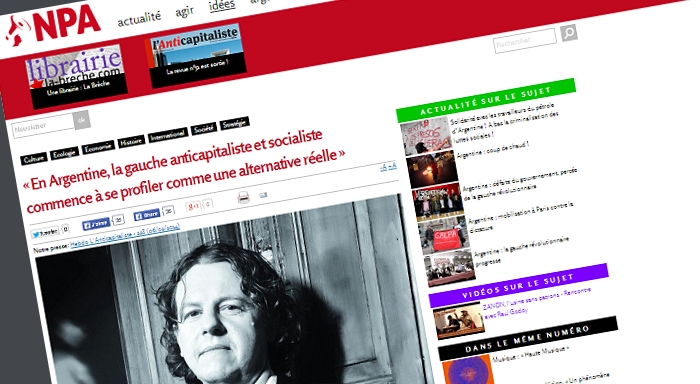 L'Anticapitaliste, no. 228, a publication of the NPA – February 6, 2014 Interview carried out by Virginia de la Siega and Laura Varlet Translator from French: Eugenia Victoria

Interview: Christian Castillo is a member of the leadership of the Partido de Trabajadores Socialistas of Argentina (PTS). During the October 2013 elections, he was one of the comrades elected on the lists of the Left and Workers’ Front (FIT), to which more than 1.2 million votes went (between 5% and 6% of the votes), something never before seen in Argentina. He arrived in Europe last month, before the opening of the parliamentary sessions; Castillo has visited London, Berlin, Barcelona and Madrid, Athens (invited by Antarsya), Toulouse and Paris. After a meeting with the magazine Contretemps and the monthly magazine Ideas de Izquierda, a meeting organized by the NPA (New Anti-capitalist Party) took place, which a hundred militants and sympathizers attended. The occasion allowed discussing again some aspects of the situation in Argentina and the lessons that the international far left could draw from the FIT.

At the height of the summer vacations in the Southern Hemisphere, the government has just announced the devaluation of the peso, in the middle of inflation. Until a short while ago, Argentina was considered as an up-and-coming country, since it had left behind the crisis of 2001….

We already saw this turn on the horizon. In two years, the dollar reserves of the Central Bank went from 50 to 29 billion dollars, inflation went up to 28%, in a context of a slowing down of the economy. Throughout the campaign, the team of President Kirchner, that is going through a crisis of succession, repeated that there would not be a devaluation. It is for that reason that one of the main ideas of the FIT was that the poorer classes would have to prepare themselves for a turn to austerity, and that, for this reason, they had to vote for the Left and Workers’ Front and get organized. Our predictions are confirmed by the offensive of the most recent days, that combines devaluation and inflation, and that directly affects the workers’ wages.

We have the impression, at least in Europe, that the far left is not in a position to capitalize on periods of crisis. How do you explain the results of the FIT?

There is social dissatisfaction regarding the government. Kirchnerism, in power since 2003, got 54% in the 2011 presidential elections, and it did not pick up more than 33% of the votes in October. Meanwhile, the general strike of November 20, 2012 developed. In the same period, the FIT doubled the number of its votes. And so we we got several Deputies in different provinces (I was elected for Buenos Aires, the most populous province of the country), as well as three national Deputies for the Legislature. To that, one must add the profile of class independence that the far left has defended in the most recent years, and the decision, in the case of the PTS especially, to intervene in an exceptional, but not exclusive, way in the workers’ movement. The resolute intervention in different phenomena of the class struggle, the presence in the factories, and the clear delimitation in relation to the different capitalist groups is what has allowed us to capitalize on the dissatisfaction that exists among the workers and the young people.

To what extent was your campaign carried out on a class terrain?

In these most recent years, we have seen that in the factories, the workers are voting in the union elections for our comrades against the union bureaucracy, but without taking the step of supporting us politically. Now, we are going to a bigger political deployment, with factories, in the northern area of Buenos Aires, for example, where between 20% and 40% of the workers voted for the FIT, and where dozens of workers, that are active in the unions with us, actively participated in the campaign. They are the first confirmations of a turn to political militancy among the wage earners. In Argentina, the anti-capitalist and socialist left is beginning to take shape as a real alternative, not only in the struggles (Zanon, Kraft, among the railway workers, to give some examples), but also on the political plane.

In Europe a debate exists about the anti-capitalist program, its adaptation or not to this current period. What is the orientation of the FIT?

I am not going to enumerate the 27 points of the program. I will say that it consists of a combination of immediate, social and democratic demands, and of transitional demands, tied to the strategic perspective of a workers’ government.

We distributed it in hundreds of thousands of leaflets. We also publicized it in television ads, with two key ideas: on the one hand, that electing Deputies of the FIT is for strengthening the struggles, to avoid the misunderstanding that with their mere election, it is enough to solve the problems; on the other hand, that in a country where Peronism has decisive power in the workers’ movement, our orientation is that of a political alternative in the world of labor.

There are those who say that the FIT should "broaden itself" ...

The FIT basically groups together three tendencies that claim to be Trotskyists: the PTS, the Partido Obrero (PO) and Izquierda Socialista (IS). Those who want the FIT to "open up," have often, in the past, had rather an ambiguous orientation of support by the left for the government, and they do not share either the program of the FIT or its orientation of class independence.

So that the crisis of Kirchnerism will not be harnessed by the right, that managed to win the majority of the opposition votes in October, my party, the PTS, thinks that it is essential to open a discussion about the building of a united revolutionary party of the workers. A simple electoral front can be a very useful tool for political agitation, but insufficient for fighting for power against the capitalists.

And what was the impact on the far left in other parts of the world?

After the crisis in 2001, the far left in Argentina intervened in many areas: among the unemployed workers, especially the Partido Obrero; in the "recovered" enterprises, with Zanon as an example, the PTS. The results of the FIT show that it is incorrect to think that, in order to get the support of large groups of workers and the young people, it is necessary to adapt to the reformist programs of managing capitalism, that Syriza or the Front of the Left in France, defend. On the contrary, they show that it is possible to advance on the basis of an orientation of clear political independence of the workers and an anti-capitalist program, to confront the crisis.

In this context, with the closures of factories, as we know, defending the perspective of occupation, of putting into production under control of the workers and of nationalization under workers’ control (one of the slogans of Zanon, whose struggle lasted for 13 years), I believe that it could have educational and political power, that the far left could bring to Europe. I also believe that the results of the FIT, the challenges that could be highlighted, could be the occasion for posing the question, on a worldwide scale, of the reconstruction of a revolutionary International of the workers.