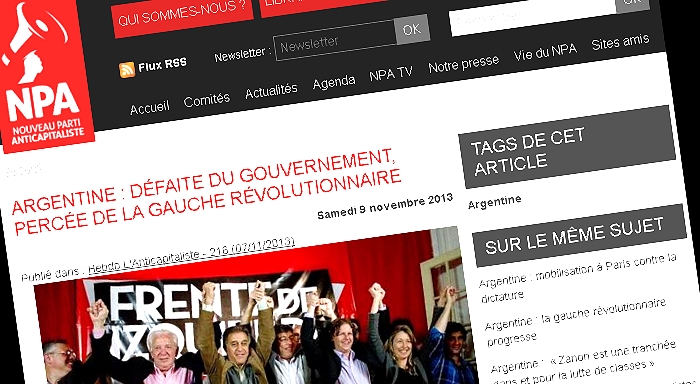 The recent mid-term elections in Argentina, which took place on October 27, represented an important defeat for President Cristina Kirchner and her Front for Victory. At the same time, the Trotskyist left performed very well.

Kirchner’s vote went down from 54% in the 2011 elections to just 32%. Kirchner’s leadership was also challenged by the right-wing Peronist Sergio Massa. This is, without doubt, the “end of the Kirchner era” which has dominated the country for the last ten years.

Although the capitalist crisis has not hit Argentina as badly as Europe, its effects have been felt. The workers and the poor are suffering from the application of Kirchner’s policies in the context of an historic crisis of capitalism, and every day the workers see how the government applies the same policies of reaching into the pockets of workers in order to save the banks and monopolies. In this framework, the very good electoral result obtained by the revolutionary left, based on an independent political intervention inside the workers’ movement with an anti-capitalist programme, is excellent news.

The Left and Workers’ Front (FIT) is composed of three Trotskyist parties: the PTS (Partido de Trabajadores Socialistas), the PO (Partido Obrero) and the IS (Izquierda Socialista) and had obtained more that 900,000 votes in the primary elections. At national level the FIT increased from 900,000 in the primary elections to 1,200,000 on October 27, which represents an increase of 30%.

The FIT secured three national deputies for the Mendoza, Salta and Buenos Aires provinces – and a fourth parliamentary seat for which we are fighting against electoral fraud in Córdoba. The FIT also won eight deputies in different provincial parliaments. The FIT representatives will hold their seats for one year before rotating out in favor of other candidates that ran on the same list.

In the immediate future, the stregthening of militant activity in factories, plants, schools and universities is posed.

Success of a strategic commitment

This is not the first time that an alliance of left parties in Argentina has obtained good electoral results. In 1983, after the fall of the military dictatorship, and in 1989 and 2001 – two moments of intense class struggle in the country – the far left also had good elections.

However, on both occasions, it was in alliance with the Communist Party – a party that defends a policy of class collaboration – behind a merely democratic programme. The FIT, in contrast, has committed itself to build a anticapitalist political alternative that defends class independence. Its programme starts from the immediate demands of the workers and links them with the need to build a political alternative to fight for a workers’ government and a socialist perspective.

This perspective has been criticised as ‘sectarian’ by some sectors in the Argentinean left. These sectors, who have been building alliances with reformist forces in “broad fronts” for years, are the same ones that defend national variants of Chavism and have given “critical support” to the Kirchner governments. These currents have suffered an important defeat in the October elections.

Let’s transform the electoral success into a militant force

The revolutionary and anticapitalist left has emerged as an electoral force and has conquered a tribune to defend the interests of working people. This has taken place before the crisis hit Argentina significantly, and for this reason it constitutes an important opportunity.

The Argentinian working class comes from a Peronist tradition (a bourgeois nationalist party). But such a high number of votes expresses the emergence of a militant sector of the workers, the youth and the masses – small yet significant – who are confronting the government from the left. A process of breaking with Peronism is underway. It seems that the traditional division between political and trade union struggles is diminishing; this will give the FIT the opportunity to move forward and toward a fusion of the revolutionary left and the workers’ movement.