General strike in Indonesia for wages and against precarious employment 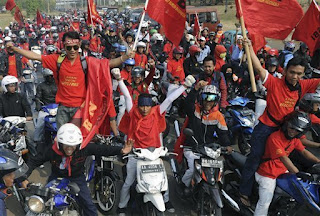 Around three million industrial workers led a massive general strike on Wednesday, October 3, in this country of south-east Asia. In the biggest industrial parks of the country, activities remained totally paralyzed. Among the most affected firms is the state-owned oil company Pertamina.

Tens of thousands of workers mobilized throughout the country, especially in the industrial districts, but also in the capital, Jakarta, as well as in several other large cities of the archipelago. With this “decentralized” kind of protest, 80 industrial parks and 24 cities found themselves affected. The police set up an immense operation around the marches, with thousands of troops. In Jakarta alone, the operation deployed 15,000 police to safeguard government buildings and other strategic points.

For wages and against uncertain employment

The protest was called by the KSPI and KSBSI union federations and led by the Indonesian Metal Workers Federation (FSPMI), among other unions. The workers are demanding a substantial increase in wages and an end to the temporary contracts law, a system known as “outsourcing,” that does not even provide the worker with health care. Thus, the struggle is taken to be very important, since it attacks an essential aspect of capitalist exploitation and tends to unify all the workers. Even more so, if one takes into consideration the fact that many multinationals located in China are beginning to invest more in countries like Vietnam or Indonesia, where the cost of labor is even lower. The temporary contracts law was declared unconstitutional months ago, by Indonesia’s Constitutional Tribunal itself, but the system continues to operate fully.

Businessmen, through the Chamber of Commerce, quickly went out to demand that the government defend temporary contracts that last a year before employees can be on a permanent contract.

Indonesia is one of the big “workshops of the world,” with millions of industrial and service-sector workers, and a large concentration of imperialist multinationals that take advantage of the low wage cost and widespread precarious employment. This high level of “industrialization” goes hand in hand with millions of people living in poverty and unemployment. According to official data, there are now 32 million people below the poverty line (13% of the population). Despite relatively low unemployment (6%), the minimum wage is 1.5 million rupees, while, in order to survive, some 3.7 million are needed. For that reason, the wage increase and the end of uncertain employment are the driving forces of the current mobilization.

In the middle of the economic crisis that the world is going through, this strike, next to the high labor unrest that China and other countries of the region, like South Korea or India, are recording, is a reliable sign of the forces that the working class can deploy.