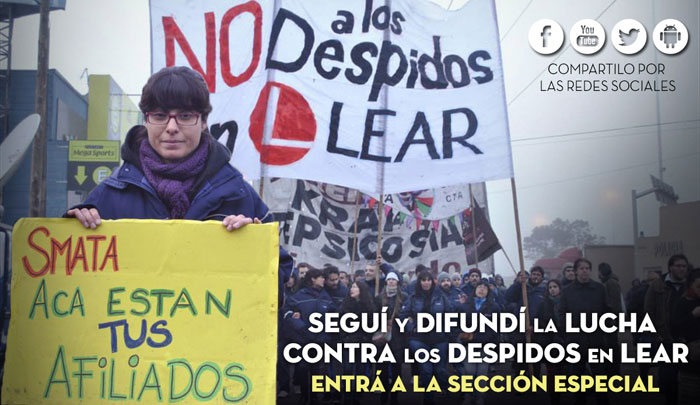 Lear Corporation, an American company with over 122,000 employees around the world and 221 locations in 36 countries, is dismissing and firing workers in their factory Argentina, located in the industrial district of Pacheco (Buenos Aires province). Lear, which makes automotive seating systems and electronics, claimed to be near bankruptcy, but during 2013 they reported sales of $16.2 billion; and the corporation ranks #177 among the Fortune 500. They also declared to have increased their sales 10% in 2014, compared to 2013. Lear has a long story of violating workers’ rights around the world, while their executives get billionaire bonuses. During the last 5 years they claimed to be in bankrupt in the US, so they could carry out mergers and acquisitions with other companies expanding worldwide to countries in Africa, Asia, Eastern Europe and Central America. Their profits went to executives’ bonuses, and the same time they cut salaries and job benefits, deteriorating working conditions. In order to avoid workers to organize for their rights they have a firm union busting policy against any kind of organization inside their factories. Although in their website you can read plenty about how much they value diversity and participation, they have many complaints of discrimination in Mexico, and other Latin-American countries. Moreover, during the last years demonstrations and protests took place against low pay, poor working conditions and dismissals in Poland, France, US and the Spain.

This is what they are doing now in Argentina: they claim to be going trough a crisis, and they want workers and their families pay for it. They are planning to fire 200 workers and their families. This is not the first time: in the US in 2009, after declaring bankrupt, they closed 28 locations and fired 20,000 workers. Workers were the only ones who pay for the company’s so called crisis; its executives still got their huge bonuses, Lear’s CEO (Robert Rossiter) got US$ 5.4 million in bonuses the same year. This fraud was so evident that even the US Justice Department objected the corporation for paying billionaire bonuses to top executives, while they were filling for bankruptcy. Lear Corporation was forced to say that had “miraculously” got over the financial crisis. Today, the struggle of the workers from Lear Argentina is part of a fight of thousands of workers around the world against this “vulture” multinational corporation. Against the humiliations, low pay jobs, layoffs and dismissals, which had became a trademark of this corporation.