After the repression and eviction from the Zócalo 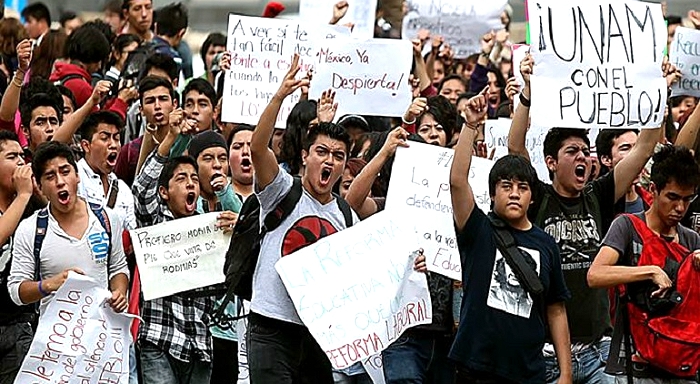 On Friday, September 13, the teachers’ camp in the Mexico City Zócalo was violently evacuated, with the toll of many teachers and young people injured and more than thirty people arrested. The repression coordinated by the PRI federal government and the PRD Mexico City government aroused a broad democratic movement of repudiation against repression, while the teachers moved their camp to another large square of the city, the Monument to the Revolution. For example, the same Friday, more than 1,000 students rallied in the Che Guevara Auditorium of UNAM’s University City; they resolved to support the struggle of the teachers and to call a mobilization for Sunday, September 15, the date when Mexico’s independence is commemorated, and when an official ceremony, headed by the repressive President Peña Nieto, would be carried out in the Zócalo. On Saturday, another, second teachers’ meeting, with more than 500 representatives of different groups of teachers, political and social organizations, decided on a plan of action for the following days, that included a call for a "national civic strike" for Thursday and Friday, this week, and the re-taking of the Mexico City Zócalo during Wednesday, September 18.

The mobilization on Sunday, September 15, brought together around 35,000 demonstrators, headed by several sections of the CNTE, with the participation of delegations from other unions. At the cry of "Here and now, with the coordinating committee," large student contingents, approximately half of the demonstration, showed up, having come from different departments and secondary schools. The teachers’ struggle and government repression have acted as a catalyst for a broad democratic movement, of recomposition and politicization among the student youth, that are retaking the process begun in 2012 with the #yosoy132 movement, and that is giving rise to student mobilizations, such as have not been seen since the UNAM strike in 1999-2000.

The government, that remains firm on its education reform, is concentrating the discontent of workers, the poor, and young people, with the plans for a "new PRI," that, as thousands were chanting, is the same old PRI dinosaur. As a continuation of this process, on Tuesday and Wednesday, massive assemblies were held in the different schools and departments. With an historically large participation, that in many assemblies exceeded 1,000 to 1,400 students, around 25 schools and universities decided, by majority vote, on the strike in solidarity with the teachers.

For a big national strike against the repressive government

On Wednesday, thousands of demonstrators, from the teachers, the Mexican Electrical Workers Union (SME), and large student contingents, mobilized from the Monument to the Revolution to the Plaza of Tlatelolco. The protection of the Zócalo by thousands of police and the Presidential General Staff itself, prevented the effort to return to that plaza and move the camp there, as broad groups of the rank and file teachers wanted. The coming days will be for the national civic strike, and some unions, like the workers in Upper Secondary Education of Mexico City, have announced that they will join the measure of struggle, in which, the student movement will also participate actively, while for next Sunday, September 22, a national mobilization against the energy reform has been announced.

From the LTS, we have participated, alongside of the teacher comrades that are promoting the Nuestra Clase bulletin and the Revolutionary Socialist Anti-capitalist Youth, by setting forth a policy for the victory of the teachers’ struggle, in the face of a government that remains firm in its position and that is betting on defeating the current mobilization. Particularly by calling for strengthening and spreading the struggle against the reform to all the education workers (where there are hundreds of thousands that are not organized in the ranks of the democratic teachers, that is the CNTE, but in the official union, the SNTE), as well as those from the CNTE and from the groups of workers, the poor, and young people, that are participating in the struggle, so that an explicit call will be made to the unions, and, in the first place, to those that claim to be in opposition and democratic, as are those organized in the Workers’ National Union (UNT), to prepare, jointly with the teachers, a national strike against the repression of teachers and against the education and energy reforms.