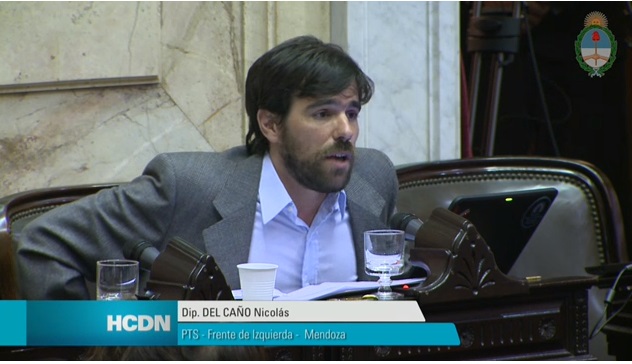 The PTS National Deputy from the Left Front (FIT), Nicolas Del Caño, questions Capitanich, who refuses to answer if he could live on a teacher’s salary

Today during the information session the national deputy Nicolas Del Caño (FIT) posed to the Cabinet Chief Jorge Capitanich several sharp questions and complaints to which the official mostly refused to respond. Alluding to the context of the historic teacher’s strike of Buenos Aires and the nine provinces—a conflict that continues to this day—Del Cano asked if Capitanich could live on a teacher’s salary. Also, when questioned regarding the number of and identities of members of the armed and security forces that acted during the dictatorship and are still in operation today, Capitanich only responded that 13 % of the workforce has participated during the dictatorship. “We want to know how many “Milani”s there are today within the repressive forces," rebuked the Del Caño. Moreover, the PTS deputy in the FIT was the first deputy to mention the national strike on April 10 (this coming Thursday), expressing solidarity and declaring the Government responsible for any repressive seizing. Finally, Mendoza’s deputy criticized the President, Cristina Kirchner, who made false and reprehensible remarks against “the outrageous conviction of the oil workers from Las Heras.” Del Caño demanded the immediate acquittal of the Las Heras workers.