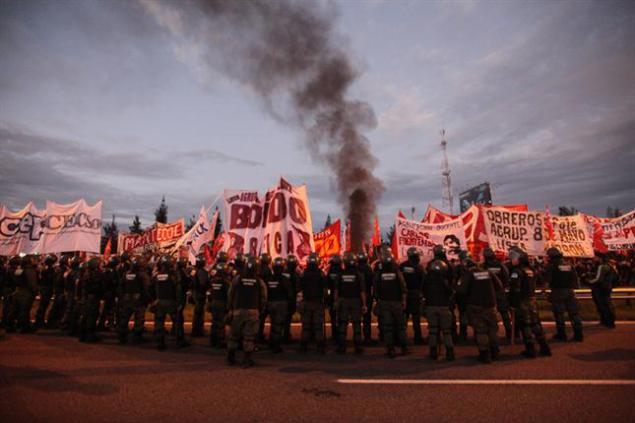 May 1st: With the Left and the Combative Unionists

It shall not be just any May First. The national Strike on April 10th showed that workers are not willing to take on the austerity measures imposed by the Kirchner’s government. And so we prepare to resist. The scabs leaders of the CGT Antonio Calo and the CTA Hugo Yasky (official unions supporting the Kirchners’) were disobeyed by millions of workers who decided not to work during the April 10th strike. The unions, shop steward committees, and combative activists, along with the Left, played an outstanding role in the factories and workplaces, where everyone voted to strike. Also, in the streets what was shown is that there’s a sector of the working class that not only opposes the government but also positions itself as an anti-bureaucratic vanguard. A new labor militancy is growing, demanding a fighting plan and for the acquittal Las Heras oil refinery workers.

This attitude was felt in hundreds of factories, workplaces, offices and schools, where the support to the strike was discussed and agreed upon at Panamericana highway, where the most important roadblock took place against the gendarmes. Those road blockades at the Industrial Park in Pilar, in Puente Avellaneda (south), on the west side of Gran Buenos Aires, in La Plata, Rosario, Jujuy, in the port of Mar del Plata, at the Centennial Bridge (Puente Centenario) in Córdoba City; other road blockade in front of the workers’ recovered ceramics factory Zanon in Neuquén province, at the ATEN march along with the teachers, and at the highway access to Mendoza’s province.

The “National Conference of Fighting Unions,” which met at Atlanta Stadium on March 15th, had already resolved to boost a campaign for the acquittal of Las Heras oil refinery workers, to demand the CGT and the CTA to call for a general strike, and to develop a fighting plan. When Moyano finally decided to call for the strike, it was only necessary to organize the roadblocks. These were decisions that allowed the working class Left to be noticed in the streets. Previously, we had assemblies in many factories to support the strike and to promote active participation. Leaders and labor groups influenced by our party the PTS, played a key role on promoting this elemental class principle: working class democracy.

A fighting May 1st

We have to take the fight to the streets (Plaza de Mayo and the main squares in the country), alongside the combative unions and the Left Front. After the workers’ strike of April 10th the government promoted two bills that summarize their orientation: The "Law of Coexistence in public demonstrations" by Carlos Kunkel (Front for Victory-Frente para la victoria), which seeks to impose an anti-road blocking bill legalizing police intervention and impeding our right to demonstrate. This would affect what the government calls "essential public services": health and education. These are ways to attack that were used historically against the struggle of the working class, and measures that seek to hit the most militant sectors. Cristina Fernandez de Kirchner has the support of the opposition, from the PRO to Frente Renovador (Massa). Another measure taken by the Kirchners’ administration is a "classic" of the official discourse. Cristina said she was concerned about the 33.5% of the unregistered workers, but the submitted drafted law does not consider other forms of job insecurity that affect more than 50% of workers. The same "battle" against unregistered workers functions to benefit employers, who are rewarded for keeping workers in that same working situation.

Until now, the government was able to overcome the most difficult moments of the economic crisis in January. They devaluated the national currency and "cooled down” the economy while looking for new debts from international credit agencies. The Kirchners’ administration agreed to indemnify Repsol and to negotiate with the Paris Club, at the same time, they pretend to put a ceiling in the salary negotiations, increase the fees, and suspensions and layoffs in the automotive and metal industries keep growing. This is the basis of the national agreement among the Government and the Opposition (employers and entrepreneurship), as they prepare a new cycle of "business" with the investments of the multinational imperialist Chevron as their logo. For the workers there will be more austerity measures.

Against the unions’ bureaucracy, for the independence of the working class and for a workers’ program to come out of the crisis.

Moyano did not speak again about implementing a fighting plan. It should not be surprising that when bureaucratic leaders call for some kind of measure, they are doing it with the intention of giving a politician from the Opposition room to breathe in advance for 2015 presidential elections. CGT leaders are split between those who support Massa and those who support Scioli. In the case of the CTA, they tailgate Binner, while Barrionuevo supports the Renewal Front (Frente Renovador-Massa). The strength of the working class at the hands of these bureaucratic leaders will only place them at the service of their executioners. This is why we do not agree with the statements made by Rubén "Pollo" Sobrero to La Nacion newspaper on April 16th about the role of Moyano. Moyano is one of the biggest trade unionist bureaucrats, with a lot of power and influence among workers. Our critique must be clear.

On May first at the Plaza de Mayo, combative unions and the FIT (Workers Left Front) raised a platform for the independence of the working class; to combat all the different wings of the bureaucracy; to come up with a program to make sure the crisis is paid for by the capitalists; to defend the right to strike and mobilization; to propel a fierce fight against the anti-road blocking bill drafted by the government and Massa; and also to fight for the acquittal of the Las Heras oil refinery workers, in addition to the dropping of litigations against activists and working class militants.

Amid bargaining, militant trade unions and the Left will fight for those who struggle, for the teachers of Salta and Neuquen who fight against the ceiling on the salary negotiations, on support of Ledesma workers, who are facing layoffs in Jujuy province, and for metal industry workers who resist suspensions and layoffs in Cordoba province. We are the ones who raise the flag of free bargaining, for a minimum wage equivalent to the cost of living, and indexed as comparable with actual inflation and Pensions equal to 82% of final salaries. We are against the tax on the workers’ incomes, against layoffs and suspensions, and against rate hikes. We are against job insecurity for unregistered workers, and for the permanent hiring of workers; for investment on a public plan under workers’ control to solve the housing shortage and weak infrastructure; for divesting ourselves of the external debt—not even a penny to Repsol or the Paris Club; for the re-nationalization of the privatized enterprises under workers’ and users’ control. On May first, we will not only demand a national fighting plan and a new general strike to the unions’ bureaucrats, we will also raise a call for the recovery of our unions—and not only against Calo and Yasky, but also against Moyano, Micheli, and Barrionuevo, who want to make us into the tail-end of the political projects of the bosses. We stand for the political independence of the working class.

In 2013, the election of the Left and the workers Front (FIT) showed that hundreds thousands of workers oppose the government, standing for a working class independence alternative. The strike and roadblocks have revealed the potential of the working class and have demonstrated what can be accomplished by the unions if the Left steps up to the front, refusing to stop until rupturing the austerity measures. Thus, this May 1st at Plaza de Mayo we must raise a platform that can be taken up by the labor leaders, as well as by the Left Front leaders, who had assumed an important role during the nationwide strike of April 10th. This is the proposal we are discussing with the rest of the forces that constitute the FIT. Long live the May First of the international working class. In Argentina and in the world capitalists must pay for the crisis.