Statement to the press 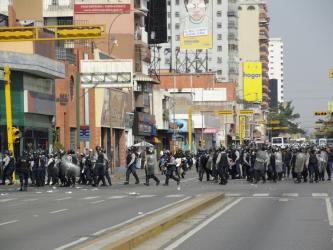 Aragua is a Venezuelan state; capital, Maracay. Its governor is the chavista Rafael Isea. The cop attack on the workers’ demonstration, described below, is only the latest in a long series of state aggressions against Venezuelan working people, for which Chávez’ government is ultimately responsible.

Around 3 p.m. (1500 hours), the gathering of the march called by the UNT-Aragua (Unión Nacional de Trabajadores del estado de Aragua), was violently repressed while all the working men and women were congregating at the intersection of Avenida Bolívar and Ayacucho, the meeting place. Trade union tendencies and political organizations of the left, among them CCURA, the Liga de Trabajadores por el Socialismo, Unidad Socialista de Izquierda, the Topo Obrero tedency, among others, and human rights organizations, headed by UNETE-Aragua [were present].

Around 200 cops from the regional police, commanded by Major David López, refused to recognize the permit requested by UNETE, and, without warning, attacked the workers with tear gas canisters, breaking up the protest against the economic measures of the national government and for trial and punishment for the murderers of Richard Gallardo, Luis Hernández and Carlos Requena, victims of hired killers, and for the release of the trade union leader of the Ferrominera del Orinoco, Rubén González, of Guayana, and of the Yupka Chief Sabino Romero. At the moment of the cop attack, more than 600 workers were getting ready to march, and hundreds of workers from all over Aragua state had yet to arrive.

The cops arrested 28 demonstrators, among them Robert González, Executive Secretary of the FUTPV, two activists of the Liga de Trabadadores por el Socialismo, activists from the human rights organization PROVEA, including Rafael Uzcátegui, several union leaders, and the rest, workers. This is one more indication of the anti-worker policy of the national and regional government, that is unloading not just economic, but also repressive measures, on the workers, when they go out to protest.

From the Liga de Trabajadores por el Socialismo (LTS), we demand the immediate release of all the arrested comrades, and we condemn the violent repression of which the workers of Aragua were victims. We denounce the national and regional government as instigators of, and those responsible for, this repression, and we call on all working men and women to combine all the forces and efforts to get the comrades out of jail.