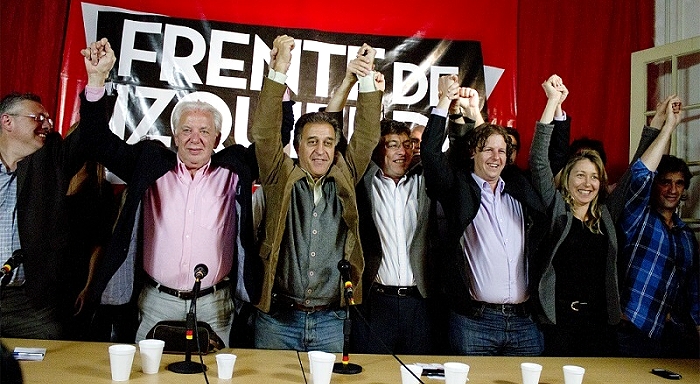 Elections in Argentina: Historic results of the Left and Workers’ Front

The Left and Workers’ Front (FIT in Spanish) won three national deputies: one MP in Mendoza province, one MP in Buenos Aires province and the third MP in Salta province. It also obtained eight provincial legislators, in addition to the ones elected in Neuquén and Cordoba in the 2011 elections.

Nicolás del Caño, member of the PTS in Mendoza Province, Pablo López and Néstor Pitrola, both of the Partido Obrero won sets as MPs. It is worth noting the high level of support received by the FIT candidates in Salta and Mendoza provinces (19 and 14% respectively) in addition to the almost half million votes obtained in Buenos Aires province and 10% in Neuquén province.

The result of the polls has deepened the setback suffered by Cristina Fernández de Kirchner in the mid-term polls. In yesterday’s elections the Front of Victory, the party of the Argentine President, has dropped from 54% two years ago to around 33% on Sunday.

At national level the FIT increased from 900,000 in the mid-term polls to 1,150,000 on Sunday, which represents an increase of 30%. This extraordinary results are even more remarkable if we take into account that the pools took place in a context of a high political polarisation: the Front for Victory was defeated in Buenos Aires province, where the Renewal Front list headed by Sergio Massa - who represents the neo-liberal policies of the establishment - won won by 11.8 percentage points. In this district also, the UNEN front received the ‘tactical vote’ of those discontent with the government.

In recent months we have seen the end of Kirchnerism in Argentina and in this context we are the only force able to present a left alternative for the workers and the youth.

The seats obtained by the FIT are going to be use to strengthen the struggles of the working people and to develop the independent political consciousness of the working class.

And read here Political election manifesto of the Left and Workers’ Front.