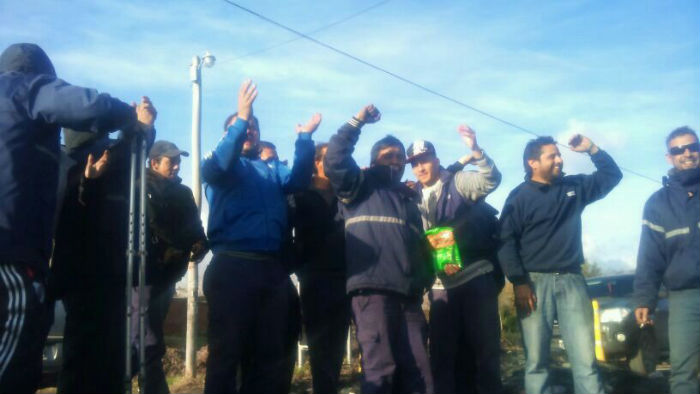 Leaving The Bridge Crane at Gestamp: Roberto Amador stated, “We have achieved a great triumph; we overcame the compulsory conciliation without the dismissed workers leaving the building.”

(Escobar, May 31, 2014) Roberto Amador is one of the nine workers that remained at Gestamp Company’s bridge crane demanding his reinstatement. Amador declared, “we have achieved a great triumph because with our struggle we have forced the provincial Ministry of Labor to decree the compulsory conciliation, reinstating all the dismissed workers in the next 15 working days. This is what the SMATA leadership (automotive industry workers’ union) declined to demand after Gestamp Company, who fired us in an unjust and discriminatory way. Here is where we started our fight.”

He added, “we showed Gestamp, SMATA leadership, and the provincial and national government that the workers’ struggle can defeat those who aim to have workers pay for the crisis. Monday (June 2nd) will be a day of action to ensure that the company meets the resolution of the Ministry.”

He concluded, underlining, “we thank the enormous solidarity and support we have received from the many workers’ organizations, organizations and people from human rights, provincial and national representatives, workers and students from this area and around the country that have supported us outside the factory, encouraging us and denouncing the inhumane treatment we received, being deprived of food and electricity. This triumph belongs to all. I also want to especially mention the “comisiones internas” (shop steward committees) of Kraft, Donnelley, Pepsico, Lear, Printpack, Unilever, SUTEBA Tigre, and all the combative workers from the Combative Unionist meeting from the northern region, and to all my comrades from the PTS (Socialist Workers Party) that along with other organizations have secured the picket lines day and night during the 4 days we remained at the bridge crane. To all the workers and fighters we say: Do not give up the fight, we can stop the abuse from our bosses and the selling out of bureaucratic unionists.”