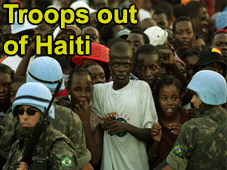 On June, 1st 2004, Argentinean, Uruguayan, Bolivian, and Chilean (among other countries) troops, lead by Brazil entered Haiti as an occupation force, which was mandated by the UN. No matter the efforts made by Lula, Cristina Kirchner or Evo Morales governments to pretend that this was a “peace mission” with an “humanitarian aim”, over these four years the UN troops have shown that their actual purpose is to give support to René Preval’s weak government, acting as a police force, chasing and crushing Haitian workers and demonstrators. These so called “progressive” governments are sending their army to play as a rearguard force, by request of the United States, so the American troops are free to be sent to act as an occupation force in Iraq and Afghanistan.

Under the excuse of fighting criminal gangs, “guarantee law and order”, UN troops carried away real war crimes, brutal massacres against Haitian people, with tens of thousands people killed and many hundred injured, like the repetitive attacks on the popular district of Cité Solieil in the capital city outskirts. Brazilian, Argentinean, Uruguayan, and Bolivian troops have been charged with maltreatment, torture and sexual abuse against women and little girls from the poorest areas; while, they are acting as a coordinated force with the National Haitian Police in the internal repression.

Facing revolts against growing inflation of food prices last April, UN troops acted as a real armed force of the Preval government, while people in the streets were asking for his resignation.

Lula, Kirchner, Evo, Bachelet, and Tabaré troops also chase and attack workers who are trying to organize themselves against brutal labor conditions imposed by the multinational companies across the 18 Free Trade Zones, where the labor regime is close to slavery, where workers are obliged to12 hour-working days or more. The troops that are occupying Haiti today are also preparing and training themselves to act in their own countries.

We, the Trotskyist Fraction-Fourth International (FT-CI), denounce the hypocrisy of Latin-American governments, who are covering up this military occupation by request of the United States, under the false argument that it is a “humanitarian mission”. At the same we express our solidarity with the fair demands of the Haitian workers and people.

Because of this, the FT-CI approved in its V Conference, to launch an international campaign calling for the immediate withdrawal of the Argentinean, Brazilian, Bolivian, Chilean, and Uruguayan troops from Haiti. We call upon all the organizations that claim themselves trotskyists like the Liga Internacional de Trabajadores (LIT, International Workers League), lead by Brazilian PSTU, who has organized already activities related to Haiti occupation, and to CRCI, leaded by Argentinean PO, among others, to organize a common campaign with this aim.

UN troops out of Haiti!

All union, workers and popular organization in those countries involved should take in their own hands the immediate troop withdrawal.

Out US imperialismo of Latin America