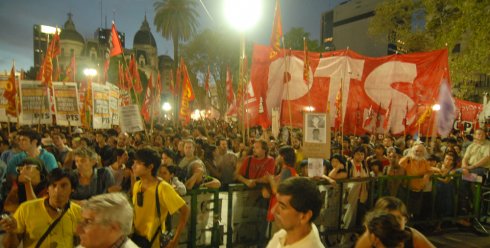 On the 33rd anniversary of the genocidal coup in Argentina, a mass demonstration with contingents from independent human rights organisations and left political parties took place in the Plaza de Mayo in Buenos Aires.

The march was called by the Movement for Memory, Truth and Justice, which is composed of human rights organisations, social organisations and left political parties, none of which are aligned with the government. It attracted 25,000 people – three times more than the demonstration organised by the right wing calling for a crackdown on crime.

The demonstration entered the Plaza de Mayo after a deliberate delay caused by the organisers of a prior rally called by human rights organisations aligned with the government, and there were provocations from a group of Kirchner supporters.

The square was packed with contingents from different organisations, among them a 2,500-strong PTS contingent of workers and youth from Buenos Aires and La Plata. The rally finished with the reading of a joint statement agreed by the participating organisations.

In Neuquén, on March 24, more than 10,000 people marched to condemn the genocidal coup of 1976. The demo was headed by the Mothers of Plaza de Mayo, Neuquén and Alto Valle branches, and human rights organisations. The 10,000-strong demonstration marched throughout the city centre and finished at the San Martín monument, where a rally with speakers from human rights organisation was held. The PTS marched with a delegation of 300 comrades and sympathisers.

ROSARIO: 300 workers and students march with the PTS

The PTS joined the demonstration with a lively delegation of 300 workers, including metal workers from Acíndar, Paraná Metal (Villa Constitución) and from Siderar; teaching and non-teaching staff belonging to the Marrón List, youth and students of the University of Rosario and secondary school students gathered in the youth organisation “No pasarán”. We marched as part of the “Committee for Democratic liberties” bloc alongside APDH, CEPRODH, ATILRA Rosario, Agrupación Manos a la Obra, Partido Obrero, Convergencia de Izquierda, PRS, PRG and other students’, workers’, political and Human Right organisations, with whom we organised a 1,500-strong rally.