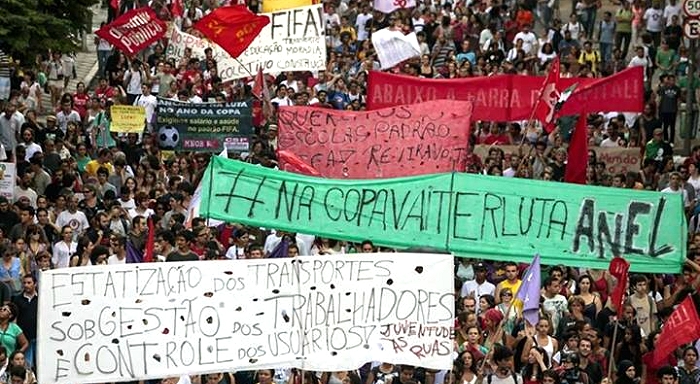 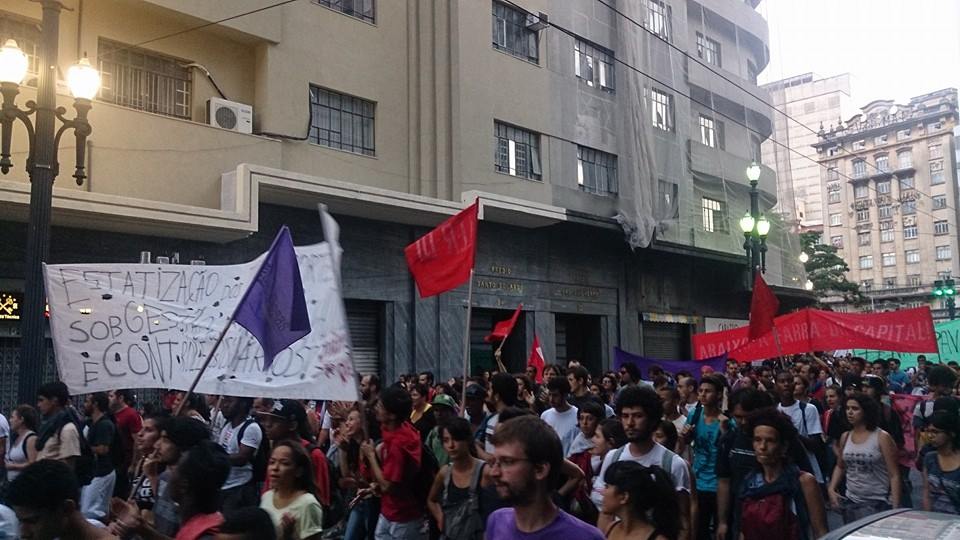 By Fernanda Montagner, a militant of Youth to the Streets and a coordinator of the Humanities Students Center of the University of Campinas (Unicamp)

Last January 25 was marked, in several capital cities, by the first actions against the injustices related to the Soccer World Cup, among which, São Paulo, that had more than three thousand participants, ended with police repression, hundreds of people locked up and wounded, and the attempted assassination of a demonstrator by the police.

These actions show a continuity with the struggles of the young people, that were brought together during the days of June and that feel most sensitive, facing the enormous expenditures of public money, while they experience precariousness and the lack of access to education, transportation, housing, which can be a spark that sets off a scene of new demonstrations in the streets, what the bourgeoisie fears most. Since the beginning of the year, with the “rolezinhos,” the young people of the black periphery have seized the shopping centers, laying down a pattern for the national discussion about exclusion of the black population, which forced President Dilma to show her fear that this phenomenon would assume proportions like those of June.

Facing the approach of the elections and of the World Cup, the PT federal government needs to silence possible movements of the young people and of the workers, and, in order to avoid a new erosion of the government, it has been creating an entire discourse that sets out that those who are against the World Cup, are making things easier for the right wing, while it is launching a "#vaitercopa" movement, that seeks to legitimize the event. At the same time, it is being pressured by the FIFA, that has already declared its apprehension relative to the continuity of the Cup and "has demanded from Brazil measures so that the situation will be controlled up to the World Cup" (esporte/terra, January 26). "Control" that means a lot of repression by the governments and their police forces.

"I can do without the World Cup; nationalization of stadiums, the subway and buses!"

In São Paulo, we of Youth to the Streets, together with subway workers, bank clerks, teachers, and high school students, formed a single bloc by raising a program that engages in a dialogue with the outrage of the population facing the uncertainty of the public services, in comparison with the expenses of the World Cup, to which they will not have access, by taking up again the main demand from June, which was transportation, setting out the need for nationalization of public transportation, under workers’ management and control by the users. In addition to being about one of main demands of the population that not only loses hours inside uncertain transportation, crowded together and with people’s lives at risk, but they also use up a big part of their wages, with the high price of the tickets; it is the only program that guarantees quality transportation for the entire population, where it is viable to think about the forms of transportation free of charge, without that meaning the enrichment of the big capitalist ruling cliques, as is currently happening.

The bloc also gave an account of the most recent national scandals: the murder of the youth Kaique, a black homosexual from the outskirts; a victim of homophobia, he was not forgotten after a year in which homophobic violence increased by 11%; we shouted, "Kaique, I am going to fight; the state will pay for your death!" Together with the black young people of the "rolezinhos," we also demanded spaces for relaxation, culture and sports, in opposition to the government’s and the bosses’ World Cup. The bloc also, as one of the main lessons of June, raised the necessity of forging revolutionary wings of the young people, and inside the student movement, that will see the alliance with the working class: "A revolutionary alliance is that of the youth with the working class!"

However, it was another action that did not even manage to reach its end, as a first general rehearsal for the World Cup; the police harshly repressed the demonstration; they chased the demonstrators, with cases of outrage taking place, physical assault of those arrested, mainly young people from the outskirts, and, in an example of action of the bloodthirsty police, the attempted murder of Fabricio, a youth of 22, who received two gunshot wounds in the chest and one in the groin. Meanwhile, the media and the governments are carrying out a reactionary campaign, attempting to stigmatize the actions as those of "vandals" and "those out of control," that destroy the public space, in an attempt to set the population against them, to hide the fact that the real "violent vandals" are in the government that runs the most murderous police force on earth. It is not accidental that Dilma created a special security troop of ten thousand men from the National Force, to repress the actions during the World Cup.

Since June, the police forces have been exhausting themselves, facing the population, before every new case of murders, tortures, like that of the construction worker Amarildo, that became a national cause, "Where is Amarildo?" This month, it is repeated with the homophobic murder of Kaike, that the police are trying to cover up, with police violence against young people of color in the “rolezinhos,” not to mention the series of reports of slaughters on the outskirts, that do not occur without the population rebelling.

During the action and in all our interventions, we have put ourselves in the places of work and study, denouncing the murderous police, in solidarity with Fabricio and with all the families and young people that were repressed and murdered by this institution that only serves to repress. As part of the campaign against repression that we have been promoting, we are fighting for the democratic freedom of demonstration, for punishing those responsible for and those who carried out this brutal police repression, and for ending this reactionary institution, an heir of the military dictatorship: No more slaughters, murderous police, get out!