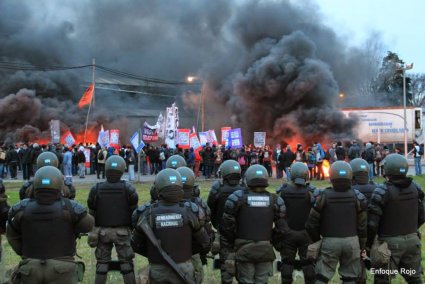 Lear: The Struggle that Makes History

Since the transnational company Lear at the plant in Pacheco announced the lay off of more than 100 workers and several more furloughs the workers -together with the support of many organizations- have been waging a heroic battle for the total reinstatement of all the laid-off and furloughed.

Lear’s conflict deepens every day. The employers and the SMATA Union bureaucrats’, protected by the repressive forces with the government’s complicit silence, are striking out against the workers. Nonetheless workers and organizations fighting alongside are coming up with new ways to resist and fight for the reinstatement of the laid-off workers. Last week reflects one of the greatest struggles in recent years. This struggle has already emerged as one of the main events of national politics, wherein workers strongly and decisively face off against powerful imperialist multinationals, and become a symbol in the fight against dismissals and suspensions affecting thousands of workers.

The delegates have to be reinstated!

For the workers, the union’s policies lack of any semblance of democracy. Following the threats to workers and the company’s announcement on Thursday, July 17 that “if the workers’ delegates are reinstated, the company will leave the country” (meaning the bosses want to decide who will be appointed as delegate), a fake assembly was carried out by the SMATA along with the company, wherein workers voted for the revocation of the delegates’ reinstatement. In the morning the workers boarded the buses to go to the factory. Among them “the union guys” told them they were going to host an assembly in the capital city to dismiss the delegates. Those who refused were told "to go to the camping", meaning they would be fired. The "hostages" were conducted in this way to an "assembly without debate”, as Pignanelli –the national secretary of SMATA-, one of the two speakers of the assembly (alongside Manrique –adjunt secretary-), has said. It was there, among thugs, where workers were forced to vote. Not even the minimum statutory steps of SMATA were respected as basic rights for the delegates to defend themselves. They had sent cards as “invitations” to the assembly, which delegates received the next day. For this reason the "assembly,” outrageously undemocratic and illegal as it was, was repudiated by human rights organizations and dozens of lawyers and journalists. Even Verbitsky, from the government-friendly newspaper Pagina 12, criticized Pignanelli. Also, Ricardo Cárpena, from the newspaper Clarin, noted the aberrancy of the "assembly.” Workers responded: “The assembly is null!” and objected to the Ministry.

Saturday morning sun portended a warm day outside the factory. Minutes before noon the Solidary Festival that would reunite more than 1000 workers and students began outside the factory. Bands, videos at nightfall, games for the kids, solidarity potlucks, and interventions from Lear workers and organizations fighting with them would be part of this journey in a relaxed atmosphere that showed society’s profound support of Lear workers. This became obvious in the delegations of the different factories and establishments arriving on the scene, all proud with the previous militancy that had fuelled the fighting fund in the campaign for "1 million pesos for Lear". A quick assembly was convened so that together with the activists, each delegation or leader could announce their contribution among cheers and applause. The entire day would end with more than 250,000 pesos gathered for the strike fund. We can proudly say that this fight will not be broken by hunger.

Another strike, another blow to the employer.

On Monday at 6:00 AM there was a new concentration at the factory’s door. As part of the week’s plan of action discussed in the assembly it was resolved that no one would enter the plant if the delegates were not admitted. Again, a strike at Lear was achieved. Thus began the week with a blow to the imperialist multinational.

Pignanelli, SMATA Union general secretary, would be criminally charged with coercion of workers, due to the phony assembly on Thursday 17th, to which workers were taken against their will. In the press conference at the National Congress announcing this measure were present dozens of personalities, such as Nora Cortinas (Plaza de Mayo mother), bearing the signature of Nobel Peace Prize Adolfo Perez Esquivel. At the Ministry of Labour the comisión interna (shop steward committee) legally contested the assembly. The audio of the "assembly without debate" leaked through media outlets and, coupled with the denunciation of different workers, inveighed the gross totalitarianism that prevails in the SMATA. The bosses and the union bureaucracy fight in order to strengthen the bosses’ dictatorship. The workers’ plan of action echoes its enormous popular support in defence of minimum democratic rights, such as having representatives elected by workers.

The Third National Day of Struggle

In the midst of their incertitude, media outlets coined the headline “car picketing.” This would be the main “caption” of a new National Day of Struggle against Lear layoffs and dismissals across the country. The bewilderment of the Gendarmerie and the news media finding hundreds of cars blocking both lanes of the PanAmericana Highway was boundless. Cleverness defeated Berni’s* policy of suppression to displace the roadblock. All the newspapers, radio stations, and television channels reflected in real time during the morning that, far from being just a “car picketing,” the vehicles were accompanied by a large mobilization with more than 500 people appearing at 6:00 AM at the door of the factory. Moreover, actions were planned and carried out in other provinces. This Wednesday the factory stopped again. "Without delegates, the factory will not produce," activist reported. At 11:00 AM the manoeuvres of Pignanelli, who tried in various ways to defeat the measures of workers’ struggle, were thwarted. At noon, the "cars picketing" would become a caravan driving towards General Paz in opposition to the announcement of 40 dismissals and to support EMFER workers in their struggle for a better salary. At the same time, in Plaza de Mayo, Elia Espen, Mother of Plaza de Mayo, gave her handkerchief to workers as a tribute to their fight, honouring the workers with the symbolic Mothers’ handkerchief. In the late afternoon, more than 1500 workers and students met at the Obelisco (centre of Buenos Aires city) to march to the Ministry of Labour. This day of struggle culminated with a major event at the doors of the ministry, where people, including delegates, the women’s Commission, the workers of EMFER, and party leaders in support of the struggle, gave their speeches. This new day of action had more media coverage than the ones before. It highlighted the denunciation of the bosses, who left on the street more than 200 workers; the role of SMATA and its phony assembly; and the complaints and demands that the government enforce the minimum democratic rights of the internal committee to participate in the hearings at the ministry. The great popular support, the firm activism, and militancy arising around it, with dozens of initiatives and measures of action, supports this fight as workers confront an alliance of employers, government, and the bureaucracy. Very significant have been the many expressions of support from Lear workers that have not been dismissed to the delegates and activists–expressions that go from, greetings, to the recordings of the phony SMATA "assembly,” to gestures of defiance.

New Audience: The Struggle Continues “For the Reinstatement of all”

Secretly, as usual, a new hearing was held in the ministry to discuss the Lear workers conflict; and, as usual, it was held in the absence of the Lear workers–a ploy of the "national and popular" government. There the reinstatement of 30 workers was "resolved" and a new audience was called for Wednesday next week. No one knows at this time the names of the "reinstated," a new manoeuvre of the SMATA and the company in order to keep activists uninformed (none of the most important delegates were summoned to be reinstated). It is an achievement of the workers’ struggle that the company and the SMATA have kept open the "negotiation." The slogan is clear: "Families in the street, Never Again." Here the vast majority of workers are still out because a whole shift of the most combative workers and delegates is not being reinstated. As the workers stated at the end of the meeting in the ministry, "this fight will not end until all the workers and delegates come back to their working positions." This coming Thursday a new workers assembly will determine the next steps in this struggle.

*Sergio Berni is the National Secretary of Security