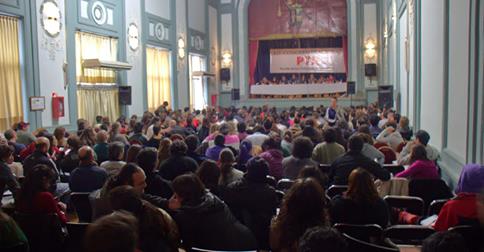 From June 20-22, the PTS held its XIV Congress in Buenos Aires, Argentina. More than 300 delegates from across the country took part, among them workers from the steel, printing, food processing, service, and sugar industries, along with teachers, municipal workers, secondary students and university students.

The qualitative and quantitative growth of our party over the past year was evident, with an estimated 40% increase in party members since our previous congress in April 2013. This year’s Congress was the culmination of an intense year of debate and party building.

PTS leader Christian Castillo analyzed the national situation, taking into account the events of recent months, the reactionary offensive against activists and the Left, the resurgence of the international debt crisis, and the need to make attacks against workers and the left known to the vanguard. He also analyzed the bourgeois economic projects, the various strategies of Peronism and of the right-wing opposition approaching the 2015 Presidential elections and the perspectives of the Left and Workers Front (FIT) and the National Conference of Combative Unions

We characterize the current situation as a “transitional period”. Key to this analysis is the declining economic growth in the country. Although the devaluation of the peso and new austerity measures allowed bourgeoisie to regroup and avoid the worst of the crisis, recession manifested in various sectors of the economy. The economic situation in Brazil, and the trends toward recession internationally, created a scenario in which employers have responded with furloughs, layoffs, and dismissals.

The government suffered an electoral defeat and has had difficulty finding a viable successor. Meanwhile, the opposition is not strong enough to constitute a clear challenge. The division of the opposition between Massa, Macri, the FA-UNEN, and the rest plays in favor of the government. Also, the shift of the primary political figures to the right is seen by many employers as an encouragement to attack the vanguard, although the majority agree on the need for an orderly transition to 2015.

As for the working class, it has shown enormous strength during the first half of the year and during the national strike on April 10th. First we had the teachers’ struggle and later April 10th became a major national political statement against austerity. So far, the actions of the workers have been defensive–fight backs against layoffs and furloughs and salary struggles where the bosses have sought to impose salary increases which are well below the inflation rate.

Our party has been raising the need to fight behind a program in which the crisis will be paid for by the capitalists and workers recover the unions from the bureaucracy. We demand that the national trade unions call for a general strike of 36 hours and a concrete plan to fight back.

The Tasks of The Party: New Ways to Multiply our Political Influence and Youth and Workers Activism

From the PTS’s perspective, our primary objective is to build a revolutionary party of the working class vanguard. At the time the party was transitioning from "1,000 to 10,000" members (1), its development depending essentially on the triumphs and defeats of class struggle. The advancements made by the Party’s ability to entice members of workers’ and students’ movements and its conquest of national political presence through national and provincial deputies have placed us in this transition.

To illustrate this, we can examine Trotsky’s position toward Germany during the 1930s in his debates with the Communist Party. At that time, the Communist International discussed the problem of ‘disproportion’ in the sense that the Communist Parties (CPs) had grown electorally in France and Germany, but not in their number of militants. In Germany the CP grows substantially, obtaining 1.3 million votes, but the Nazis grow with 5.6 million votes. Trotsky argues that the electoral results were not a matter to celebrate, as the Stalinists did, and points out the ’disproportion’ between political influence and the development of militancy. He notes that German Stalinism tries to resolve the ’disproportion’ with organizational measures. They argue, “we have electoral influence, we have to build ourselves, then we will bring people into the party somehow.” This is a bureaucratic and administrative interpretation of the problem. There is a political problem, says Trotsky. In Germany, the workers do not trust the CP. Workers will vote for them because they represents the October Revolution in Russia–not for their political leadership.

At that time, the Communist International adopted the disastrous policy of the “Third Period”–the characterization of Social Democrats as ‘Social-fascists’ instead of calling for a workers’ united front against the Nazis.

The CP was not able to generate the necessary enthusiasm and trust in order to recruit workers for the party. And although the Social Democrats obtained 8.6 million votes, and the Communist Party only received 4.6 million, the Social Democrat voters were not the most loyal supporters. It was its own mistakes that prevented the CP from growing much more electorally.

Today, our situation is very different. The CP was a party that led the German labor movement in the revolution of 1923. In Argentina, we come from a long Peronist tradition in the labor movement, which has marginalized the Left. Our 1.2 million votes are a new phenomenon. But what we want to take from Trotsky’s analysis of that period is his approach to the problem. The relationship between the electoral influence and the militant strength is a political problem.

The congress needs to be aware that the first problem that we face to build the party is whether our program is the right one in the class struggle and political struggle, if our politics generate enthusiasm, if workers and the youth want to be part of the party. It is necessary to see if our politics entice workers within the unions and factories and students. Most important of all is that we should be aware that workers and the youth understand and share our goals. This is responsibility of the national and regional leadership, and of every political team within the PTS.

In this context, when workers see the government’s shift to the right and that the bosses’ alternatives are the same or worse, they will understand much more clearly that workers need to build their own party with a socialist program–a program that calls for the capitalists to pay for the crisis–against the imperialist and the capitalists oppression; a program to fight for a workers’ united front, showing its presence and fighting in every conflict; a program to win back the unions and get rid of the union bureaucracy and coordinating the anti-bureaucratic and combative sectors; a program that will fight for the organization of thousands of young workers and students to fight for student councils.

Another central aspect discussed was the goal of achieving a quality of party in accordance with our objectives, this is to say, a party with a majority working class composition that is able to demonstrate its revolutionary character in the working class struggle and with a political theory of the strategy we defend. The reports presented showed that the militants in our party grew by 40% since our last Congress, with a composition of 56% workers (27% industrial workers, 24% teachers, public employees and health care workers, and 5% young workers) and 38.5% students.

1,000 comrades, most of them new to our ranks, have taken part in our workshops on the Communist Manifesto in recent months, with 40 comrades coordinating the workshops. The debates held by the workers in the party were outstanding, discussing international and national politics, and how to build a revolutionary party. This showed a substantial progress compared to past congresses, especially among the youth and new militants and leaders of the working class.

At the same time we analysed that our political praxis in the working class struggle has proved that we are willing to break the limits that the regime imposes us when circumstances require it. This happened on February 27th (a day of action for the acquittal of the Las Heras oil refinery workers) and in the national strike of April 10th when we were repressed by the Gendarmerie, with our parliamentary representatives on the front line.

Dozens of delegates spoke out on different problems and possibilities in the working class movement, the youth and the student movements, and the women’s movement. Many supported the initiative of launching a daily, online newspaper and the challenge it means for our party. The delegates also talked about the need to spread our organization in other structures as well as geographically (this means prioritizing the workplaces and the schools and universities in each city), and the importance of theory in their political progress.

Emilio Albamonte reinforced the idea of a digital daily newspaper as a challenge because it means daily political responses and being prepared for the time when we have enough militant forces to print our own newspaper, together with the changes that we are willing to make to La Verdad Obrera (the weekly newspaper of the PTS), in order to adapt it to the needs of the working class and the changes it implies for the PTS leadership).

“Legal and illegal work” was another issue he underscored. The political regime imposes this issue in this period, above all when we are persecuted in the factories where the bosses and the unions’ bureaucracy punish activists and left militants with layoffs, comparing this with revolutionary or counter-revolutionary periods. The congress ended by delegates electing new leaders of the party, by secret ballot, as we do in every congress according to our statutes, and the inclusion of new comrades into our organization, the majority of them workers.