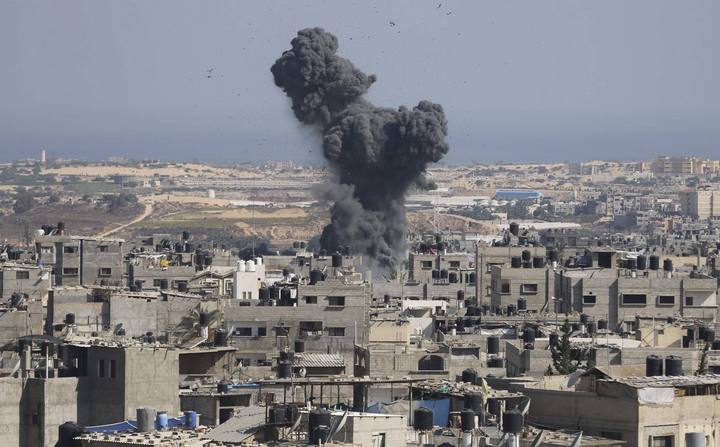 August 26, 2014 – On August 26, the President of the Palestinian National Authority, Mahmoud Abbas, announced that the Palestinians and Israelis who met in Cairo had arrived at a permanent ceasefire agreement in Cairo. In this way, Operation Protective Edge, the lengthiest and bloodiest military offensive of the four that the State of Israel has carried out since it withdrew from the Gaza Strip in 2005, reached its end.

The figures show the scope of the massacre: in 50 days of bombings, the Israeli army murdered 2,100 Palestinians, almost all civilians, including 500 children, and it wounded another 11,000. It destroyed 17,000 houses and turned 500,000 inhabitants of Gaza, almost a third of the population of Gaza, into displaced people that are surviving as they are able, in schools, hospitals and shelters of the United Nations, that have also been a target of the attacks. In addition, it killed three important military leaders of Hamas. In contrast, Israel suffered 70 casualties (64 soldiers, 6 civilians, among them, 1 child).

However, the result of Operation Protective Edge showed once more the validity of an old maxim of the art of war: that the count of casualties and material damages does not, by itself, define victories or defeats. Moral forces and political motivations also count. Ultimately, the one that achieves his objectives, although they may be modest, ends up winning. And Hamas won this round (the daily paperHaaretz headlines its assessment, "Hamas 1 – Israel 0").

For that reason, despite having paid a high price, the Palestinians, and, in particular, Hamas and Islamic Jihad, are celebrating what they consider a victory of their resistance, facing Israel’s power, while Netanyahu’s government is plunged into a crisis and cannot sell the outcome to its allies/rivals of the extreme right wing as a victory, since they know that what does not kill Hamas, strengthens it.

It could be said that seven weeks of Israel’s one-sided and asymmetrical war against Hamas were needed to return to the terms of the last ceasefire, also negotiated by Egypt in 2012 after Operation Pillar of Defense. In effect, the 2014 agreement is almost identical: a partial relaxation of the blockade of the Gaza Strip that includes the temporary opening of the border crossings between Gaza and Israel and between Gaza and Egypt, and an extension of the area permitted for fishing, while Hamas’ other demands, like the reconstruction of the Gaza airport, destroyed by Israel in the year 2000, the release of some 500 Palestinian prisoners and the definitive lifting of the blockade, are left for later.

But the conditions are very different, which makes the taste of defeat, that a large part of the Israeli political establishment feels, more bitter

Between 2012 and 2014, there was a change from the promise of the "Arab Spring" to the advance of the forces of reaction – the United States, the Saudi monarchy, the Egyptian military. The weight of that adverse relationship of forces was also felt in the Palestinian-Israeli conflict. Before Operation Protective Edge, Hamas was in a situation of isolation, and its government in the Gaza Strip, on the verge of collapse. With the fall of the Muslim Brotherhood government in Egypt and the breakup of its alliance with Syria (and temporarily with Iran), it had remained without regional allies, which drove its leadership to negotiate a government of reconciliation with the Palestinian Authority.

The armed resistance to the Israeli offensive allowed it to recover prestige and legitimacy, and it ended up being a privileged interlocutor in the ceasefire negotiation.

Israel, Egypt and the United States will try to subordinate Hamas to the Palestinian Authority (PA), by anointing Abbas as the guarantor of the agreements, giving the PA control of the border crossings, in order not to find themselves in the predicament of negotiating with Hamas. But this formal power of the PA is far from the reality on the ground. While Abbas remained unperturbed in the face of the Israeli offensive, on the West Bank where he governs, thousands of young people with rocks made the specter of the Intifada return.

Netanyahu himself, questioned by the extreme right wing, that reproaches him for having handed Hamas a victory on a silver platter, is the one who appears to be the biggest loser. The Israeli press now considers that Operation Protective Edge launched the ultra-right-wing on the election campaign.

The agreement, that was approved by Netanyahu unilaterally, produced a political breakup in the government’s cabinet. Three of its ministers, among them, the ultra-right-wing Chancellor A. Lieberman, rejected the agreement. A group from the Likud, the Prime Minister’s party, did the same thing. This extreme right wing appears to be in tune with the majority opinion of Israeli society. Netanyahu’s popularity, that had reached exorbitant figures of more than 80%, when the land invasion of Gaza was launched, collapsed after the agreement. Only 38% consider it correct. Even the leader of the left-wing Meretz party blamed Netanyahu for having allowed Hamas to seize "the victory when it was going to a certain defeat." However, the scale of the massacre also produced a polarization: 10,000 Israelis challenged this brutal turn to the right and demonstrated last week against the military offensive.

This government crisis expresses the dilemma that the Zionist state faces. While Netanyahu’s policy is to keep the conflict under control, which leads to repeated military operations (2006, 2008-2009, 2012, 2014), the extreme right-wing opposition is struggling for a sort of "final solution," an end to Hamas and a possible expulsion of the Palestinian population, that anyway is impossible in the current relationship of forces.

How to finish off apartheid

Although the Palestinian masses in Gaza and also on the West Bank are celebrating, with relief, the end of the military attack, and they feel the morale that resistance gives, they continue experiencing and suffering the colonial oppression of the State of Israel, supported by the United States and the Western powers. Under the ceasefire agreement, Gaza will continue to be an open-air prison, subject to economic blockade and the threat of Israeli military intervention. The expansion of the colonists’ settlements on the West Bank will continue. That is, the Palestinian people will continue to live under an apartheid regime.

Operation Protective Edge stirred up the stunning repudiation by hundreds of thousands that mobilized around the world against the war-mongering of the Zionist state, and it exposed as never before the enormous hypocrisy of the United States, the European Union and the United Nations, that justified Israel’s war crimes. Thousands of people of Jewish origin said again, "Not in our name." Now it is clear that Israel does not accept even the "fiction of a" Palestinian "state" and that the tendencies towards fascism that are emerging within Israel are the result of its colonial project. Facing Zionism’s racist policy of fighting for an "exclusively Jewish state," increasingly more dissident voices are emerging, that have arrived at the conclusion that the alternative to a new ethnic cleansing and to permanent war is to dismantle that racist and colonialist state apparatus and to replace it by a single, non-racist, Palestinian state, that will respect the national rights of Arabs and Jews. From our point of view, that result is not a utopia, but the only progressive solution to this crisis. But it will only be able to be obtained as a by-product of a revolutionary struggle against the local ruling classes and the imperialist powers that they serve, opening the road to socialism.