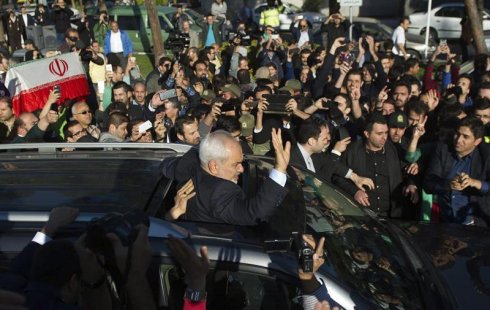 On April 2, the G5+1 (the Western powers plus Russia and China), led by the United States, arrived at a preliminary agreement with Iran on the nuclear program of the Islamic Republic, that it will have to bring to an end in June of this year. This is a big step for the strategy of the Obama administration, that needs the cooperation of the Iranian regime to fight the Islamic State in Iraq and Syria and the Taliban in Afghanistan. The re-establishment of relations between the United States and Iran, suspended since 1979, is strongly resisted by Saudi Arabia, Israel and Turkey, and it is already producing an earthquake in the system of alliances in the convulsed Middle East.

Outside of the anticipated term, the head of US diplomacy, John Kerry, at the front of the G5+1, achieved an agreement with the Iranian regime on Teheran’s nuclear program. Although the details of the agreement, that will get a definitive form by June of this year, are unknown, what is indeed known is that Iran will reduce its nuclear activity by two thirds and will open its installations to international inspection, submitting to this control for a period that will last between 10 and 15 years. In exchange, the Western powers will lift sanctions that are weighing on Iran, and that have seriously affected its economy, by reducing its oil and gas production capacity.

The United States will appropriate the triumph of having removed the possibility that Iran will make nuclear weapons for at least the next decade.The Iranian regime will try to sell it on its domestic front as a legitimization of its nuclear program in front of the international community and as the great way to free itself from the economic sanctions and begin a course of investment and growth.

But the significance of the agreement by far exceeds the nuclear problem and says a great deal about the regional conflicts and about the dilemmas of US policy. Obama took on the presidency of the United States with the aim of closing down the Bush presidency’s two failed experiences, the occupation of Iraq and Afghanistan, and, in that way, being able to reorient foreign policy towards other points where the imperialist national interest is at risk, especially in Pacific Asia, where the United States seeks to bolster up the position of the allies (Japan, South Korea), facing China’s advance.

From that point of view, his foreign policy has been unsuccessful. He will end his second term with the United States participating in another war in Iraq and Syria (and perhaps in Libya and/or Yemen) against the Islamic State and its related groups, an enemy that emerged from the very conditions created by the US occupation of Iraq and supported by the reactionary course that the situation took with the defeat of the processes of the Arab Spring.

This is the framework for the pragmatic turn of Obama’s administration, that has prioritized accelerating an agreement with the Iranian regime about its nuclear program. The United States needs Iran’s cooperation in order to fight the Islamic State (IS) and manage re-establishing some resemblance of stability in Iraq (and, more generally, keeping the Shiite minorities active in other countries, under control), and, at the same time, in order to advance in the withdrawal of troops from Afghanistan, that appears ever more difficult, in the face of the persistent resistance of the Taliban.

With this agreement, the United States is admitting that the relation of forces does not allow it to destroy Iran’s nuclear program, which would involve opening another military front in a country of 80 million people. The realistic objective is to keep it controlled, so that Iran’s enrichment activity will be below the threshold for making nuclear weapons.

The US hope is that, in the coming years, a "regime change" will take place, and that a government more allied to its interests will emerge, whether as a result of a peaceful evolutionary process – so that the reformists will go on gaining ground and marginalizing the conservatives – or by a more abrupt turn of the situation, because of the troubled social dynamics. In the event that this agreement is broken, the calculation of the United States and its allies is that they would have a year to organize the response and prevent Iran from taking the leap to obtain nuclear weapons.

The biggest thing is that this agreement would involve the beginning of the re-establishment of the relationships between the United States and Iran, interrupted since the 1979 revolution. This fact is not minor, given the historical importance that Iran has had in the architecture of US power in the Middle East.

Obama is risking the end of his term on this agreement. As is known, he has strong domestic opposition in Congress with its Republican majority. Internationally, this policy towards Iran is fiercely resisted by Saudi Arabia, Turkey and Israel, where the rightwinger Benjamin Netanyahu, perhaps the most strident spokesman of the hawks that are agitating against the nuclear threat, but, in reality, are opposed to Iran’s going from being an international pariah to a partner of the United States in the Middle East, has just won a new term.

The alternative of this sector inevitably leads to a military confrontation against Iran to resolve the dilemma that the defeat of the US militaristic policy left posed. The invasion of Iraq and the overthrow of Saddam Hussein broke the regional equilibria that had stood for decades. Its main collateral effect was the regional strengthening of Iran, the number one enemy of the US and its allies – Saudi Arabia and Israel. The Shiite majority’s arrival in power in Iraq gave Iran an impact on regional power that until now it did not possess. With a system of alliances based on the regime of Bashar al Assad in Syria, Hezbollah in Lebanon, Hamas in the Palestinian territories and Iraq, the Iranian regime has become an essential part for the security of the United States, not only in Iraq, but also in order to try to find a stable solution to the occupation of Afghanistan and fighting the Islamic State, which is making Iran’s regional influence, that has now spread as far as Yemen, increase.

However, the Islamic Republic does not have it easy either. The arrival in power in 2013 of Hassan Rouhani, a moderate cleric that represents the so-called "reformist" sector, in opposition to the conservative sector of the clergy, facilitated this political turn of Washington, that sees a window of opportunity for dealing with the Iranian problem. But, in case the agreement falls through or there are provocations from US allies, the fractures in the Iranian regime, that demagogically uses anti-US sentiment to justify its policy of social control, will forcefully reappear.

It remains to be seen whether this agreement will help stability or will foster tensions and rivalries. The Middle East is immersed in a situation at the same time reactionary and highly unstable. After the enormous convulsion that the Arab Spring signified, that led to the overthrow of fundamental allies of the United States, like Mubarak in Egypt, the Obama administration is returning to a "realistic" line of seeking that the regional powers that are disputing the hegemony, should reach equilibrium. This compels the United States to work in common with Iran in Iraq and Afghanistan and partially in Syria, but the US is faced with Iran’s allies in Syria and Yemen.

A period has begun of strong disputes and rivalries among the various actors, in order to achieve a positioning more favorable to the interests of each one. This situation has led some analysts to suggest that the destiny of the region is controlled by the ups and downs of a "cold war" between Iran and Saudi Arabia.

The conflict in Yemen could be the prelude to a bigger war, since it is there that the "Sunni" alliance promoted by Saudi Arabia, to manage to stop the advance of the Houtis (and, therefore, of Iran), is being tested.

The war against the Islamic State (IS) could be a prolonged and costly process; in fact, the US government itself is talking about years, rather than months. On the other hand, it is not said that the IS will be the only or the final organization of this type that will cause problems for the West and its allies. The destruction of moderate Islam as an agent of diversion by way of the "democratic reaction" of the processes of the Arab Spring, is nurturing the emergence of radicalized variants like the Islamic State, that find an echo not only in the Muslim countries, but also in the Arab communities in the West.

If the latest wave of splits of radicalized variants from Sunni Islam, like the Algerian GIA or the Gamaa Islamiya group in Egypt, is taken as a parameter, government combat against these groups has lasted for at least a decade.

As has happened historically, the conflicts in the region have had international impact and reach. The attacks of last January in Paris are, perhaps, a preview of a tendency that could spread in the coming years.