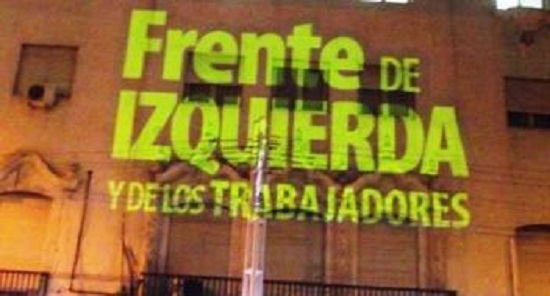 We are standing against the candidates of the Frente para la Victoria (Front for Victory the ruling party) and other parties of the opposition, from the PRO right-wing and the dissident Peronism, to the coalition made by the Frente Amplio Progresista (Progressive and Broad Front) - FAP, the UCR, the Coalicion Civica, The Proyecto Sur and other minor parties from the center-left. As in 2011 we stand for the political independence of the working class against all the bosses’ alternatives and alliances. The first challenge is to obtain 1.5% of the electorate to overcome the proscriptive law and guarantee the presence of the left in October’s elections.

Against all the bosses’ alternatives

The candidates of the ruling party and those from the opposition parties will try to establish themselves as alternatives for the 2015 presidential elections. All of them are part of the same group of bosses’ politicians, enriching themselves through their roles as managers of the capitalists business. They earn, either as MPs or in the ministries, more than twenty times the average wage.

Therein lies the importance of the demand “that every parliament member or public official should earn the same as a teacher” that was submitted as bill – in the Neuquén provincial parliament – by provincial deputy of the left and workers’ front, Raúl Godoy, Zanon worker and member of the PTS. This measure, together with the principle of revocability by voters’ choice, attacks the material basis that allows the existence of mainstream politicians. We will fight to obtain the number of votes needed to pass the primaries elections and to obtain deputies of the Left and Workers’ Front. The FIT deputies (MPs) will give their support, on the streets and on the workplaces, to the struggles and demands of the working class and the masses. The FIT deputies will speak out against the dirty business of the bosses’ politicians and the businessmen. The FIT deputies will earn the same as a teacher and act as true tribunes of the people.

These are the core proposals of the campaign which aims, together with other points of our program, to a real alternative for the working people: “the expropriation of the expropriators” and a government of the working class and the poor.