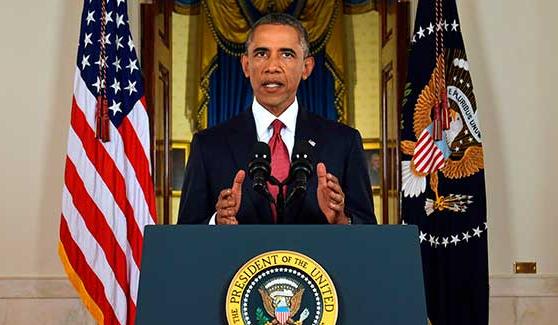 At press time for this edition, US President Barack Obama presented his military strategy for dealing with the militias of the Islamic State (ISIL) in Iraq and Syria. It was a carefully prepared speech to inspire confidence among the people of the US, that, after years of "fighting terrorism," the country and its interests overseas "are safer" after military operations like those that got rid of Osama Bin Laden, or, recently, the leader of Al Qaeda in Somalia.

At the same time, he tried to respond to the obvious and profound crisis of hegemony that the biggest economic and military power of the planet is bearing. He announced a "broad coalition" of countries (with a fundamental role for his Saudi and Turkish allies) to fight ISIL, for which Secretary of State John Kerry traveled unexpectedly on September 10 to the Middle East and then traveled to Europe, in order to win the support of some 40 countries. Similarly, he stated that this war, unlike those that Bush led, is destined to eradicate a group that "is not Islamic, but simply terrorists." And he also stated that this war is part of the American leadership that is confronting the "Russian aggression in Ukraine" or the use of chemical weapons against opponents by Al Assad’s Syrian government, reporting in passing the severity of the geopolitical crisis with Putin’s Russia, that is at its worst moment since the end of the Cold War.

Specifically, the expansion of military operations (more than 150 aerial attacks have already been made in Iraq) will consist of the increase of bombings in Iraq and their extension to Syria. This last is probably the most important of his announcements, since they would be made without Assad’s authorization, and it could make the situation even worse. Obama announced that there will not be US troops fighting ISIL, although they will send 470 soldiers for logistic support and training of the Iraqi army and the Kurds. Together with this, the funding and arms aid to the new Iraqi government and to the Kurds will be increased, and also, another important announcement, to the armed groups in Syria, "moderate" opponents of President Al Assad, that are fighting against ISIL.

The brutality of this Islamic force, that emerged from the entrails of Al Qaeda, gave the United States a new "casus belli" ["justification for war"]: for the first time in a decade, after the disastrous wars in Iraq and Afghanistan and the defeat of Bush’s militaristic strategy, the majority of Americans seem to be in agreement with having their armed forces bomb Iraq (71%), and even with extending their operations to Syria (65%). The result is not surprising. This Washington Post and ABC News survey, widely disseminated to go on generating the warlike climate, was made after the abhorrent execution of two US journalists, beheaded by ISIL.

However, this new enemy, like the Taliban and Al Qaeda before, is not an expression of dark, inexplicable forces, but, to a large extent, a result of the United States’ own imperial policy.

Only a year ago, Obama backed down from intervening militarily in Syria, faced with the enormous unpopularity of a new war, and the certain defeat it was going to suffer in Congress, that he had already foreseen would not authorize the operation.

Now ISIL seems to have given him the excuse. The Democratic administration has worked in the most recent days to give a veneer of legitimacy to its new imperial adventure in the Middle East.

The intervention would respond to the request for help from the new Iraqi government formed on September 8. This "all inclusive" government is an attempt to re-create "national unity" among Kurds, Shiites and Sunnis, a requirement for the United States to become involved in direct combat against ISIL. There would also be plans to rebuild Iraqi security forces made up of Sunni and Shiite militias. In this way, the United States is trying to reestablish the balance of power between the main Iraqi forces – broken under al Maliki’s government – and to counteract the activation of rival regional powers – like Iran and Saudi Arabia – that sponsor and encourage the tendencies to civil war.

A new war with an uncertain ending

Helped by the absolutely reactionary character of ISIL, the US government appears to have had a relative success in selling public opinion this new military incursion, imagined to be without shedding blood and of short duration, limited to aerial attacks.

Obama spoke to the country to tell it that it is embarking on a war, that when it begins is known, but not when it will end, at a critical time for the President. Only 43% of those polled consider him a strong leader, and more than half believe that his Presidency is a failure. On this perception, the Republican Party is pushing for adopting a more aggressive military policy. But this circumstantial support, obtained when the pictures of the executioner from ISIL decapitating a defenseless US citizen are still fresh, can vanish as quickly as it emerged, like the effect of the September 11 attacks, on which Bush tried to base the "new American century," an imperial dream that ended in a nightmare in Iraq and Afghanistan, disappeared.