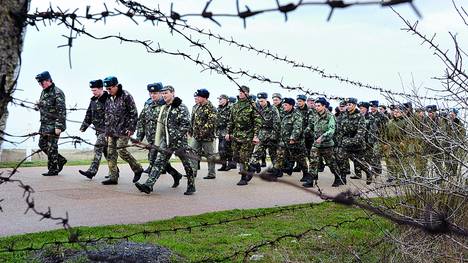 Ukraine: The dispute between Russia and the imperialist powers March 6, 2014

In the last week, Ukraine has turned into a battlefield for what many analysts are already calling a "new cold war" between the United States (and the European Union), on the one hand, and Russia, on the other, where there are big economic and geopolitical interests in play. The imperialist powers are trying to capitalize on the fall of Yanukovych’s pro-Russian government and its replacement by a pro-European government, to advance in pulling Ukraine out of Russia’s sphere of influence and align Ukraine with the interests of the United States and the EU, which includes NATO’s military expansion up to the borders of Russia. As a response, President Vladimir Putin deployed tens of thousands of soldiers on the western border with Ukraine and increased the military presence in the Crimean peninsula, a strategic region where the Russian Black Sea fleet is docked, under the pretext of protecting the Russian-speaking majority of the population. He even considered the possibility of a bigger incursion in eastern Ukraine, up to the secession of Crimea. This was a message from Putin that he is not going to stay with arms crossed, watching how the Western powers set up a fence around Russia. Obama and other imperialist chiefs of state responded with threats of imposing economic sanctions on Russia. But Putin seems to have read correctly the divergent interests and the situation of weakness in which the both the United States and the EU find themselves, to realize sanctions. At press time, the situation seemed to have moved back from its highest point of tension. The threats and military escalations yielded their place to feverish diplomacy, to find a negotiated solution. Over and above the historical analogies with the First and Second World Wars, that circulated in the media, neither the United States nor the European Union is ready to go to war for Ukraine, that is, a war against Russia, the extent and consequences of which cannot be foreseen. However, this crisis, the biggest at least since the end of the Cold War, is far from having been ended, and, although it is possible that some pragmatic agreement will be reached between the pro-Western and pro-Russian groups that will allow reestablishing a certain stability, other scenarios, less probable but more catastrophic, among them, the partition of Ukrainian territory, cannot be ruled out entirely.

The Ukrainian crisis has highlighted the contradictions and limits of the imperialist powers to respond to the Russian challenge. In the context of its hegemonic decline, and leaving aside the military option of a NATO intervention (outside of all calculation), the policy of the United States was to threaten to impose marginal economic sanctions on any member of the Russian government and other penalties, like excluding Russia from the Group of Eight. However, it is not clear that it could impose them; without going further in 2008, during the brief war between Russia and Georgia, the US government approved economic sanctions against the Russian regime that never took effect. The European Union, although it supported the uprising against Yanukovych, and it seeks to incorporate Ukraine into its economic and military sphere, cannot endorse a regime of economic sanctions, since that would go against the interests of its main members. Supplying the European Union’s energy depends on gas it imports from Russia. Russia is not only the main supplier of Germany’s energy, but also its fourth-largest commercial partner outside of the European Union. France has big investments in the Russian automotive industry, in addition to the fact that London and other cities have the big financial deals of the main Russian oligarchs. This explains the mainly pro-negotiation line of the EU, especially that of Merkel, who even opposes implementing slight sanctions, that seek a balance between penalizing the Russian offensive on Crimea, but without that affecting their economic relationships.

In these contradictions, Russia is playing in order to conceal its own weakness. Since the disintegration of the former Soviet Union in 1991, and taking advantage of the chaos of the first years of the capitalist restoration under Yeltsin’s government, with the resulting economic, political and social decline of the former USSR, the United States advanced on Russia and its zone of influence, although it was not able to turn Russia into a semi-colonial country. With Putin’s arrival in power, this course of disintegration began to be reversed. Putin established a Bonapartist regime, strengthening the state’s authority; he took tight control of the country’s main resources, confronting even some of the oligarchs that had kept the spoils from the privatizations; he reconverted Russia from an old industrial power into a country exporting oil and gas, thoroughly profiting from the high prices of these raw materials, and he repaired its army. This has led, in the most recent years, to Russia’s making a come-back as a regional power and to its trying to resist the political offensive of the Western powers on its own closer sphere of influence, by deploying a series of initiatives like the Euro-Asiatic Customs Union or subsidizing the price of gas, although in no way turning into a great power: its economy is increasingly revenue-based and depends on the price of oil and gas. On the geopolitical plane, three former Soviet Republics, Estonia, Latvia and Lithuania, and the rest of the Warsaw Pact allies, have entered NATO.

For an independent, working-class and socialist Ukraine

The Ukrainian workers and groups of the poor are bargaining chips in this plot of economic and geopolitical interests of the imperialist powers and Russia. In the two decades of capitalist restoration, with both pro-Russian and pro-Western governments, the oligarchs (former members of the Stalinist regime, who became magnates with the capitalist restoration) have looted state property, keeping the main businesses.

The Ukrainian economy was severely hit by the capitalist crisis and the fall in the price of steel, one of its main exports. In 2009 alone, the GDP fell by 15%. The crisis in the EU made conditions worse. To maintain the value of the local currency, the hryvnia, the Central Bank practically liquidated its reserves, that fell from 40 billion dollars in 2011 to 12 billion in 2014. Finally, the Central Bank let the hryvnia fall, and it suffered a severe devaluation, increasing the burden of debt denominated in foreign currency; it put extreme measures on banking customers in place, to prevent the collapse of the banking system.

While Yanukovych wavered between approaching the EU and keeping his relationships with Russia, in accordance with the interests of the elite of local oligarchs, the neo-liberal government, that took office last week, formed by the pro-Western parties and groups from the far right, has already announced that it will have to take anti-popular measures (they went so far as to talk about "suicidal policies"), and it will have to make a commitment to the adjustment, in exchange for financial aid from its friends of the IMF and the EU. These structural reforms, as already seen in Greece or in Spain, involve a decline in wages, factory closures, layoffs, privatizations and reduction of public spending.

Putin’s military and political maneuvers, including his claim to Crimea and his alleged defense of Ukrainian autonomy, have nothing to do with fighting imperialism, but with defending the interests of Russian capitalism and its geopolitical positions. Meanwhile, the supposed Ukrainian "nationalists" are stirring up anti-Russian hatred, even going so far as to prohibit the use of the Russian language, that millions of Ukrainian citizens speak, but those "nationalists" are kneeling in front of the IMF and Brussels.

The interests of the Ukrainian workers and groups of the poor are diametrically opposed to these two reactionary factions and to their domestic agents. The Maidan Square mobilizations, although they had economic shortages and the anger against a corrupt and repressive government as a background, did not raise a program that would permit a working-class solution to the crisis; rather, they were aligned with the neo-liberal opposition, with a pro-European Union and extreme nationalist program, which was expressed in the prominent role that neo-Nazi groups played. For that reason, the fall of Yanukovych, was not the victory of the "democratic revolution," as tendencies like the LIT and the comrades of Izquierda Socialista suppose, but the replacement of one capitalist clique by another.

Ukrainian nationalism has its historical roots in the oppression exercised by Russia that goes back to the Czarist empire. After the 1917 Russian Revolution, Ukraine voluntarily joined the USSR in 1922, but Stalin again employed national oppression against the Ukrainian people, which involved a brutal famine at the beginning of 1930, with the policy of forced collectivization, and the deportation of the Tatar population from Crimea to the Republics of Central Asia. Against the Stalinist policy, Trotsky raised the right to Ukraine’s self-determination. That oppression fed anti-Russian hatred and pushed the Ukrainian nationalists to collaborate with the Nazis during the Second World War.

Now, in Crimea, both Russia and the pro-Western parties are playing the card of nationalism for their own reactionary ends, which could lead to the possibility of the division of Ukrainian territory into areas under the influence and protection of the imperialist powers and Russia.

Only the working class can give a progressive solution. The only realistic perspective so that Ukraine will be independent is to expropriate the oligarchs – the new capitalists that kept the big public enterprises – to stop paying the foreign debt, nationalize banking, foreign trade and the main resources of the economy and put them at the service of the workers and groups of the poor, that is, to fight for a workers’ and socialist Ukraine, with democratic rights for all the ethnic and national groups. This would be a lever for the social revolution in Russia and Europe, where, ultimately, the fate of Ukraine will be decided.