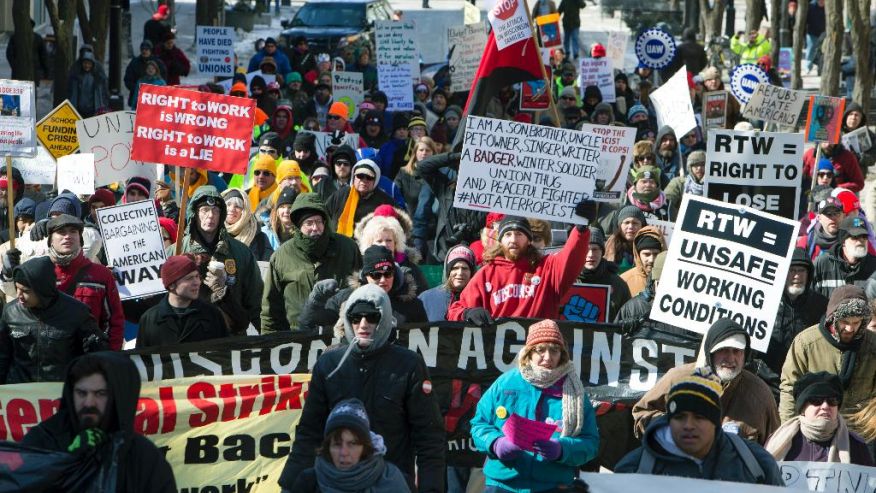 Governor Scott Walker is poised to sign into law the anti-union "Right to Work" legislation in Wisconsin, making it the 25th state to do so. The union bureaucracy has so far refused to call for general strike in the state to fight back against the law.

The latest attack against labor in Wisconsin

Wisconsin is set become the latest state in the U.S. to adopt the radical anti-union legislation known as Right to Work. The legislation, which will severely undermine the power of unions in the state, was passed by the state Assembly on Friday. Recognizing that the law would be vastly unpopular among workers and many other sectors, the legislation was fast-tracked through the legislature by the Republican majority, removing the possibility of any real debate on the law before the vote. Republican Governor Scott Walker is expected to sign it into law as soon as Monday.

Right to Work represents the latest assault on workers in Wisconsin by Scott Walker. In 2011, he signed into law Act 10, which stripped state employee unions of nearly all their collective bargaining rights, required these unions to hold recertification votes every year, forced state employees to increase their pension and health care contributions, and capped all future salary increases. With the passage of this newest legislation, Walker will have cemented his legacy as one of the most anti-labor governors in decades. This legacy will surely be a factor in Walker’s expected candidacy for President in 2016.

Right to Work prevents unions from making membership dues mandatory within the workplaces they have organized. Without mandatory dues in place, employees within unionized shops are able to "freeload", taking advantage of all the benefits of a collectively bargained contract–typically higher wages, better health and retirement benefits, and important safety protections–all without having to pay any dues. With fewer employees paying dues, the unions’ only source of revenue, unions have fewer resources to defend existing unionized workplaces, organize new shops and bargain for stronger contracts.

Wisconsin would become the 25th Right to Work state, making the law a reality in one half of all states in the country. However, Wisconsin is not just one more state to go on the offensive against unions–it is a historic stronghold for organized labor.

Wisconsin’s history of worker struggles goes back at least to the mid-19th century, when the first unions were formed in the state. In 1886, one day after the infamous Haymarket affair in Chicago, there was the Bay View Massacre in Milwaukee, Wisconsin. More than 10,000 workers marched in support of an eight-hour workday. The Governor called in the state militia to halt the march. The workers refused to retreat and the militia fired on the workers, killing seven. Although the Milwaukee workers, like the Chicago workers of Haymarket, were temporarily defeated, their call for an eight-hour workday was taken up as a rallying cry by workers across the country and over the next decades, more and more workplaces achieved this fundamental right.

Two years after Bay View, in 1886, came major strikes by woodworkers in the city of Oshkosh. Demanding an end to poverty wages, over 1,500 workers struck for fourteen weeks, despite severe repression by the police. Three organizers were arrested and charged with conspiracy against their employers–a common tactic of the bosses at the time. The workers defeated the charges in court, effectively representing the end of this draconian tactic.

At the start of the Twentieth Century, as a result of the state’s militant labor movement, Wisconsin became the first state in the country to adopt workers compensation laws in 1911 and unemployment insurance in 1932.

Why now in Wisconsin?

The Right to Work campaign in Wisconsin represents the bosses’ offensive against the growing workers struggles taking place across the country–from the massive oil strikes at over a dozen refineries across the country, to the conflicts on the docks of the West Coast, to the growing struggle by fast food workers for unionization and higher wages.

Republicans were also encouraged by the successful passage of Right to Work in Michigan and Indiana in 2012. Prior to that, the law had for the most part, been confined to the Southern and Western states with low concentrations of unionized workers. The successful campaigns in Michigan and Indiana, demonstrated that even the more industrialized states with relatively higher unionized workforces could achieve Right to Work. The Governor of Illinois, a state with over 900,000 unionized workers, recently called for the creation of Right to Work "zones" within that state.

Walker’s strategy of attacking organized labor has been heavily financed by the billionaire right-wing Koch brothers and their lobbying group Americans For Prosperity, which opened a Wisconsin office in the mid-2000s. CNN reported that in 2011-2012, during the recall campaign against the Governor, AFP estimated spending $10 million in Wisconsin to back Walker and his policies. The Kochs’ total spending in the state since then, while never publicly disclosed, is likely much higher.

The Failed Strategy of The Union Bureaucracy

After the passage of Act 10 in 2011, more than 100,000 workers and their supporters marched in Madison against the law. Thousands bravely occupied the State Capitol building for three weeks. Yet the one action that could have forced the employers to retreat–a general strike in the state–was never called for by the union bureaucrats, thus emboldening the bosses and paving the way for the newest anti-union laws.

Regrettably, the union bureaucracy has failed to learn the lessons of 2011, and has ignored the calls for a general strike against Right to Work. Instead, unions have focused their energy on extending current collective bargaining agreements with individual employers, continuing to pour money into the coffers of the Democratic opposition, and incredibly, forming coalitions with employer "partners" against the law.

Seeking to pressure Republican legislators to vote against the bill, unions formed a coalition of existing contracts with their employees. This strategy however, only served to de-mobilize workers and direct their faith to supposedly "friendly" bosses, instead of their own power.

For a true fight back against the anti-worker offensive of Scott Walker and the Koch brothers, the unions of Wisconsin must channel the militant history of fighting unions in Wisconsin and call for a general strike across the state. Unionized and non-unionized workers must organize themselves independently of the Democrats and the bosses, and rely only on their own considerable forces. This is the only strategy that will bring an end to anti-worker policies in Wisconsin.