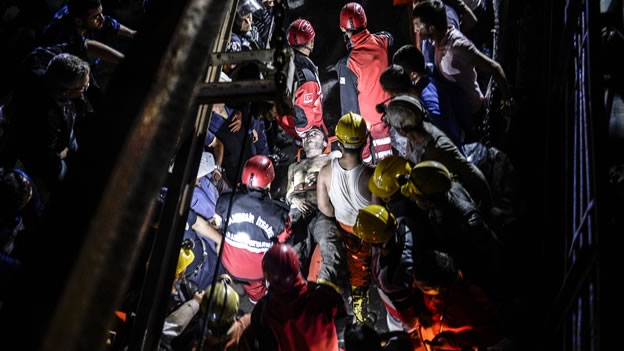 Turkey: The government and exploitation by the employers are to blame

On Tuesday, May 13, more than 250 miners died in Soma, Turkey, in a mine explosion; several dozen more were seriously injured. Hundreds of workers continue to be trapped in a mine 400 meters underground, with their lives endangered. Because of the large number of illegal workers in the Turkish mining sector, there is no concrete number of how many miners continue to be trapped. But it is clear that this tragedy is not a work accident but a massacre. Prime Minister Erdoğan downplayed the deaths as victims of a typical accident, calling on the people to pray and declaring a three-day national period of mourning. After arriving in Soma, his car was attacked by demonstrators, and he had to take refuge in a supermarket, in order to flee from the infuriated demonstrators.

The neo-liberal policy of the Turkish regime has its expression in highly precarious working conditions and a broad sector of cheap labor. Because of the lack of safety at work, last year, 1,203 people died from accidents at work, among them, nine miners from Soma. A complaint from opposition parties in Parliament, in April, last year, because of safety conditions at work in Soma was rejected by the government as "unjustified." The formerly state-owned enterprise became increasingly hostile to the workers in the context of the new wave of neo-liberal privatization and job uncertainty. There are 14 subcontracted firms in the mine at Soma. Many miners were working for those firms for less than the 300 Euro minimum wage. A young illegal worker, 15 years old, was also among the dead. Turkey is in the first place in Europe as regards the worst conditions at work, and in third place internationally. It offers the workers only catastrophic conditions. But neither should one be misled and believe that a more "humane" capitalism could offer the workers better conditions, especially in a semi-colonial country like Turkey. As long as working conditions continue to be mere expense factors for the capitalists, workers will die for the capitalists’ profits. Only by overthrowing capitalism will the workers be able to have really decent and safe working conditions.

On Wednesday, university strikes and demonstrations against the government took place in several Turkish cities. The main demand of the protest movement is the resignation of the government as being responsible for the massacre. The big union federations DISK (Confederation of the Revolutionary Workers’ Unions), Türk-İş (Confederation of the Workers’ Unions of Turkey), KESK (Public Workers’ Confederation), TMMOB (Union of Architects and Engineers), and TTB (Turkish Doctors’ Union) called for demonstrations and for a one-day national strike on Thursday, May 15. The hypocritical Turkish government decided on a three-day national mourning period because of the events, while its hands are bathed in the blood of hundreds of miners.

The crisis of the Turkish regime grows worse, because of the unresolved social question, harsh labor conflicts and conflicts among the bourgeoisie. We support the protest movement against the government. But we think that the unions, over and above symbolic one-day strikes, have the task of calling a political General Strike, of indefinite duration, until the mines are nationalized under workers’ control, and the Ministers and the Prime Minister responsible have resigned. The union bureaucracy has played a role of a brake on the labor struggles on the rise in the most recent months. That means: the heroic struggles of the oppressed masses of Turkey in the streets and factories since the beginning of the Gezi rebellion encountered their limits because there was no anti-bureaucratic and revolutionary policy in the unions; nor did the workers’ movement intervene in the movement of the masses, beyond isolated events.

On the contrary, faced with the crisis of the increasingly unpopular government, because of its neoliberal, anti-democratic and pro-imperialist policy, it is necessary that the workers’ movement join the young people of Taksim Square, with its own methods of strikes, picket lines and factory occupations, to build a workers’ anti-bureaucratic and revolutionary alternative, that will overthrow the government and will fight for a workers’ and people’s solution to the crisis.